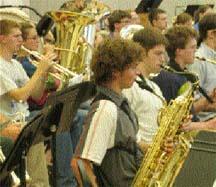 The LU Wind Ensemble will begin their concert series next Saturday, October 18 at 8 p.m. Above, members of the group prepare for the concert.
Beth McHenry

The LU Wind Ensemble will begin their concert series next Saturday, October 18 at 8 p.m. Above, members of the group prepare for the concert. (Julien Poncet)

After weeks of rehearsal, the Lawrence University Wind Ensemble and the Lawrence University Symphonic Band will commence their 2003-2004 season with the Fall Festival Concert on Saturday. The first concert of the year for any large ensemble, the Fall Festival Concert will be conducted by professor Robert Levy and guest conductor Donald Hunsberger.

Levy, who has been directing at Lawrence since 1979, will be leaving Lawrence next year and is looking forward to a wonderful beginning to his last year.

“I’m very excited always about the first concert of the year because it’s a challenge to get a whole new group of students playing together,” Levy said.

Hunsberger, the musician slated to conduct the Wind Ensemble, will be arriving at Lawrence on Wednesday and rehearsing with the band on Wednesday, Friday, and Saturday in preparation for Saturday evening’s concert.

Hunsberger will also be available for a question and answer period at 11:10 on Thursday in Shattuck Hall.

As the longstanding director of the Eastman Wind Ensemble at the Eastman School of Music, Hunsberger is considered one of the country’s experts in conducting and arranging music. Hunsberger has also become prominent in the music world for his literary and research work.

Levy is thrilled to welcome Hunsberger to the Lawrence Conservatory. “I have the greatest respect and admiration for him,” said Levy. “He’s a marvelous musician.”

The Symphonic Band, conducted by Levy, will play three pieces, including a new work composed by Eric Ewazen titled Flight.

Hunsberger will conduct the Wind Ensemble in four pieces, including Dancin’ in the 20’s (A Ragtime Dance Music Review), a composition of pieces used in silent movies and arranged by Hunsberger.

The Fall Festival Concert will begin at 8 p.m. on Saturday, Oct. 18 in the Lawrence Memorial Chapel.