The new face of College Avenue: Where have all the cruisers gone? 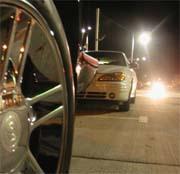 Inside the Lawrence bubble, College Avenue represents at most a symbolic division between conservatory and college, and at least a busy street to cross very carefully. Beyond that, the Ave serves as a lifeline into town and the first step into the outside world.Every weekend, the lifeline transforms into a drag strip.

The culture of cars and bars on College Avenue has intrigued and mystified generations of Lawrentians—especially those too young to enter (and too virtuous to sneak inside) any of the Ave’s many alcoholic hotspots.

For the young and the old, for men and women, clubgoers, barhoppers, and cruisers, the Ave is a place to come together on a Friday night.

Over the past few months, the face of College Avenue has changed drastically. The newly-polished “Apple” looks a bit more highbrow, with the Performing Arts Center attracting high culture, new bars calling adults of all ages downtown, and the beautified sidewalks seeming perfect for idyllic evening strolls.

Ironically, a major reason that Appleton has expanded the Ave is to cut down on the city’s expansion of the metro area. USA Today has cited Appleton as one of the worst cases of urban sprawl in the country, and the city hopes that the Ave will help to concentrate the city population around its new downtown.

To do this, much of College Avenue’s new design aims at giving the Ave back to pedestrians. The construction widened the sidewalks and parking spaces, while the street actually became more narrow. More additions, like colored crosswalks, new streetlamps, and the kiosks that provide pedestrians with directions favor the safety and ease of those on foot over those cruising up and down the Ave.

Going further toward turning the Ave into a major pedestrian zone, on Sept. 4, 2002, the city council passed a resolution to “explore the feasibility of using the downtown area as a pedestrian plaza after 9 p.m. on Friday and Saturday nights during the summer months.” The details are still to be worked out in a committee that has not yet formed, but the Ave would potentially close much like it does in the fall for events like Octoberfest.

According to Bill Siebers, assistant to the Mayor,”this idea was not generated for the purpose of getting rid of the cruisers.” He said that Mayor Hanna has often stated that he is not opposed to cruising but rather to the loud noise, littering, vandalism, etc.

With such improvements and proposed changes, should there still be a place for cruisers? Exactly what role do cruisers play in the changing society of Appleton?

The Lawrentian wanted to pose these and other questions to a variety of people on a typical Friday night on the Ave. So an editorial triumvirate (Devin Burke, Jonathon Roberts, and Peter Gillette) hit the streets with taperecorders in hand.

One such long-standing bastion of the highbrow along the Ave is Peggy’s Cafe. One member of the triumvirate still recalls vividly a serene evening one year ago today, actually, when a serene, post-Bobby McFerrin concert dessert at Peggy’s was interrupted by a drag-race outside; such are the memories that lead to the cruising stereotypes.

But in the view of Carrie, the manager of Peggy’s Cafe, the cruisers “hoot and holler, but they actually don’t actually do anything wrong.” She feels that the cruisers bring an energy to the Avenue that adds to the nightlife and helps entice customers.

What does she think about the idea of closing College Avenue to cruisers? “Oh, that’s a big no-no. Bad idea,” she says.

Carrie also said that College Avenue means a lot to a lot of people. When the Ave was closed, their business went down substantially despite the availability of access and parking on surrounding streets.

The varying sources reflected the variety of people found downtown. While the cruisers moved too fast to interview, the barhoppers and merchants were, for the most part, excited to be talking up Appleton.

Many pointed out that there are few such locations where more age groups mix. Older couples having a “night on the town,” adults continuing the fun of their Octoberfest experiences, Lawrentians and other college-aged students all share the same space and interact. We interviewed people who hailed from Appleton to California to Algoma.

The common demoninator among all these groups was alcohol: all, notably, except for the cruisers. Don, a father in his early 40s, was all for cruising. He explained that the cruisers weren’t out getting wasted like many youths do, and that the Ave represents a place for cruising teenagers to gather and be safe.

“You have to have a positive platform for kids to grow up in, and this isn’t such a bad deal, compared to some of the alternatives out there.” He mentioned that in Madison, “the biggest proponent of not raising the drinking age was the police, because now we got more parties to deal with.”

Then he added that parents shouldn’t “all of a sudden grow up and realize, ‘Shoot, what I did was stupid. I don’t want them to do that.’ That’s what I see a lot of people doing, parents my age…”

He has a daughter, he said. “I would rather have my 15-year-old daughter driving 30 miles an hour up and down a street than 55 an hour on a country highway,” Don added.

Cruising, in addition to being mostly safe, goes on with an unspoken assuredness that the pack will travel together. Our quest began with an attempted cruise, around 9:30 p.m.

But cruising is no easy task for the uninitiated. The route is not advertised; we asked around for a while before anyone told us. The energy of the Ave seems, on the whole, intuitive.

Our attempted route began at the Lawrentian offices on East Washington Street and Park Avenue. We finally turned onto College Ave. and moved into the left lane in front of La Bamba’s.

We then noticed a male motorcyclist with long, graying hair braided in a Native American style. Several times in the evening he passed, and we referred to him as “the Shaman.”

Our experience with the Shaman was a signal that our initial—and, frankly, exploitative—motives in spending a journalistic night out on the Ave weremisguided.

He was an adult who liked to drive and see the sights. His bike had a loud engine, but he hurt no one. He just liked to drive in a circle and people watch. We never interviewed him because, as far as we could tell, he never stopped driving; cruising was his Friday night activity.

Cruisers are far from just drag racers, and we met barflies who reached the heights of profundity. At the very least, bikers and other adults like “the Shaman” helped debunk the adolescent stereotypes.

Toward the younger cruisers, Don, the middle aged father, summed up a common sentiment: “I don’t know what the harm is in it.”

Since the cruisers’ route sends them traveling down Drew Street—as confirmed by two Park Central clubgoers—they are a colorful addition to the landscape of Lawrence life. It remains to be seen what their future role with Lawrentians and as part of Appleton’s culture will turn out to be.

he younger generation of cruisers are certainly prominent but by no means the only people who populate the Ave on Friday and Saturday nights. (Andria Helm)

a passing truck&s tinted window reflects one of the Avenue&s
centers of attention, the newly opened The Bar, near the new Performing Arts Center. Both are part a growing pedestrian nightlife. (Julien Poncet)