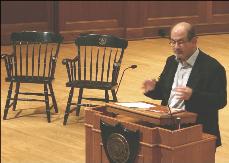 When asked what he or she thought of the April 20 convocation, almost every student replied that Salman Rushdie was much funnier than they thought he would be.
Students expected someone to stand behind a podium and give an address. Instead they got a down-to-earth man who preferred to tell a story than formally address a packed audience.
Rushdie’s convocation was different from the beginning. President Jill Beck introduced Rushdie and, after extolling his fruitful life as an artist, offered her somber and heartfelt sympathy for the Islamic decree, or “fatwa,” from the Iranian government placing a price on his head.
When he took the podium, Rushdie did not make a speech; he told a story. His manner was unaffected and unassuming.
“It wasn’t like he was giving a speech to the students,” said junior Veronica DeVore. “It was like he was talking to one of us.”
Although Rushdie has led an interesting and fruitful life, he spent little time discussing it. Rather, he spent much of his address discussing his belief that “art will save the world” by breaking down borders and reaching new frontiers.
He described his attempt to break down borders between countries and religions in his 1988 book “The Satanic Verses.” This was also the book that resulted in the $3 million fatwa, issued by Ayatollah Ruhollah Khomeini.
Rushdie also discussed the absurd reactions to his work, citing a movie made about him several years ago in which he was portrayed as living in a huge mansion, dressed in safari suits all the time and having an angry disposition characterized by drunken sadistic rages.
As Lawrentians saw during Rushdie’s convocation address, nothing could be further from the truth.
After Khomeini issued the fatwa, Rushdie lived under constant protection and rarely made a public appearance. At the end of his speech he seemed relieved that he would be going to a luncheon where he could sit and chat with a table of students.
The convocation with Rushdie was an event where students were offered a relaxing chance to listen to and interact with an artist whose work not only entertains but also has a political and social purpose. 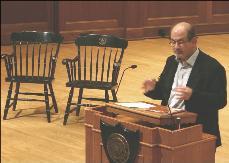