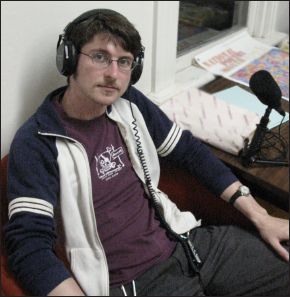 Reid Stratton is a musician with a diverse set of interests and the kind of drive to bring them all to fruition. Stratton has explored performing, composing and conducting all with notable success in each. Whether you’ve seen him with baton in hand, behind his euphonium, or secretly recording you eating at Downer, you’ll enjoy this insight into the mind of this unique artist.Where are you from and what is your major?
I’m a music education major from Portland, Ore.

How long have you been playing and writing music?
I began playing the trumpet in the school band in sixth grade. I first started writing music for a swing band I was in during high school.

How would you describe your music?
The music I’m currently working on is completely based on field recordings. I go out with my portable mike and recorder and collect sounds I find intriguing – a city bus driving by, a hockey game, a crowded bar. My goal is to present these everyday sounds in as simple and clear a way as possible. I refrain from manipulating the sounds, but instead organize and layer them in ways that create meaningful combinations of sounds. Right now all of my pieces in this vein have been tape pieces – just pop it in a CD player and press play. Now I’m trying to find ways to use live elements, too.

What musicians or composers have been particularly inspirational to you?
I’ve been very inspired by the Fluxus performance art movement, which often took mundane, everyday activities and showcased them in ways that elevated them to an “art” status. I also love Webern because he seems to have really focused on sound, and not just melody, harmony, etc. Matt Turner, a former professor, has also been very inspirational to me. Besides being just about the most talented performer and teacher I’ve ever met, he introduced me to new forms of music I had never imagined.

What do you hope to accomplish with your music?
I’m trying to create combinations of sounds that are moving in some way. I just love hearing the sound of someone cutting apples combined with the hum of the refrigerator, with a lawn mower and kids playing in the park outside drifting in and out. My goal is to highlight those moments, shape them, and share the moments with other people.

Do you have any upcoming performances?
I am conducting an operetta on Sunday, April 30 at 9:30 p.m. in room 163 of Shattuck Hall. My euphonium recital is Monday, May 1 at 8:00 p.m. in Harper Hall. I’m also conducting two pieces on Bryan Teoh’s composition recital, including a work he wrote for me to conduct. That’s on May 11 at 8:00 p.m.

What projects are you currently working?
My euphonium recital has been taking up a significant amount of my time lately. One of the pieces I’m playing is an original composition for electro-euphonium. In fact, this recital may well be the world premier of the solo electro-euphonium, which is an instrument I have developed over the last two or three years. Essentially, I hook my instrument up to an effects processor and my computer, then amplify it. The piece I wrote is very loosely based on a poem by Ted Kooser, and features live electro-euphonium along with a pre-made accompaniment of field recordings.

What are your plans for the future either near or distant?
After student teaching this fall, I’m moving to New York with three other Lawrentians. We’re going to get an apartment together and put together a group we were in last year, ICELU. We hope to break into the New York experimental music scene. Wishful thinking, I know, but we’re all pretty stoked about it. 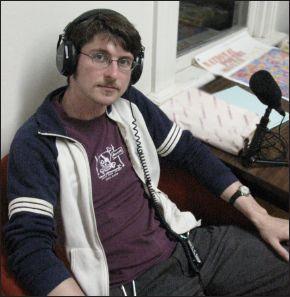 (Brent Schwert) Reid Stratton is a musician with a diverse set of interests and the kind of drive to bring them all to fruition. Stratton has explored performing, composing and conducting all with notable success in each. Whether you’ve seen him with baton in hand, behind his euphonium, or secretly recording you eating at Downer,…