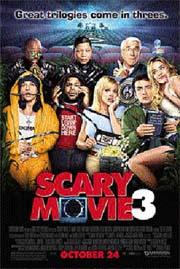 Although the Wayans brothers (creators of the Scary Movie universe) have nothing to do with this sequel, Scary Movie 3 is very much the same as Scary Movie 1 and 2. Except that it’s much funnier.

Scary Movie 3 continues to follow Cindy Campell (Anna Faris) as she investigates the connection between mysterious crop circles and a videotape that kills whoever watches it within seven days.

Sound familiar? That’s because Scary Movie 3 spoofs virtually every blockbuster of the past year, including Signs, The Ring, 8 Mile, and Matrix: Reloaded.

If you haven’t seen these movies, I would recommend renting at the very least Signs and The Ring first or you will miss most of the best jokes. Of course, if you haven’t seen two of last year’s top box office hits, I might wonder what rock you have been living under.

Besides being a worthy parody of these films, Scary Movie 3 is satirical and remarkably funny. The humor is, of course, crude, raunchy, and absurd. The movie itself is fantastically stupid. But that doesn’t mean it’s bad.

There are two kinds of stupid movies: movies that set out to be stupid and accomplish this objective, and movies that try to be serious but fail miserably.

Scary Movie 3 is the former. We expect ridiculous situations and an illogical plot. We expect the characters to be obtuse and hokey. No one intending to see this movie will be surprised or shocked by its content.

That said, this movie is obviously not for everyone. Those who have never found enjoyment in movies that require little mental proficiency to enjoy will not be suddenly converted. Go see Runaway Jury instead; it was rather good.

No matter how many hardcore dramas or serious films the industry turns out, there will always be a place in the hearts of the movie-going public for the Scary Movies of this world. A-