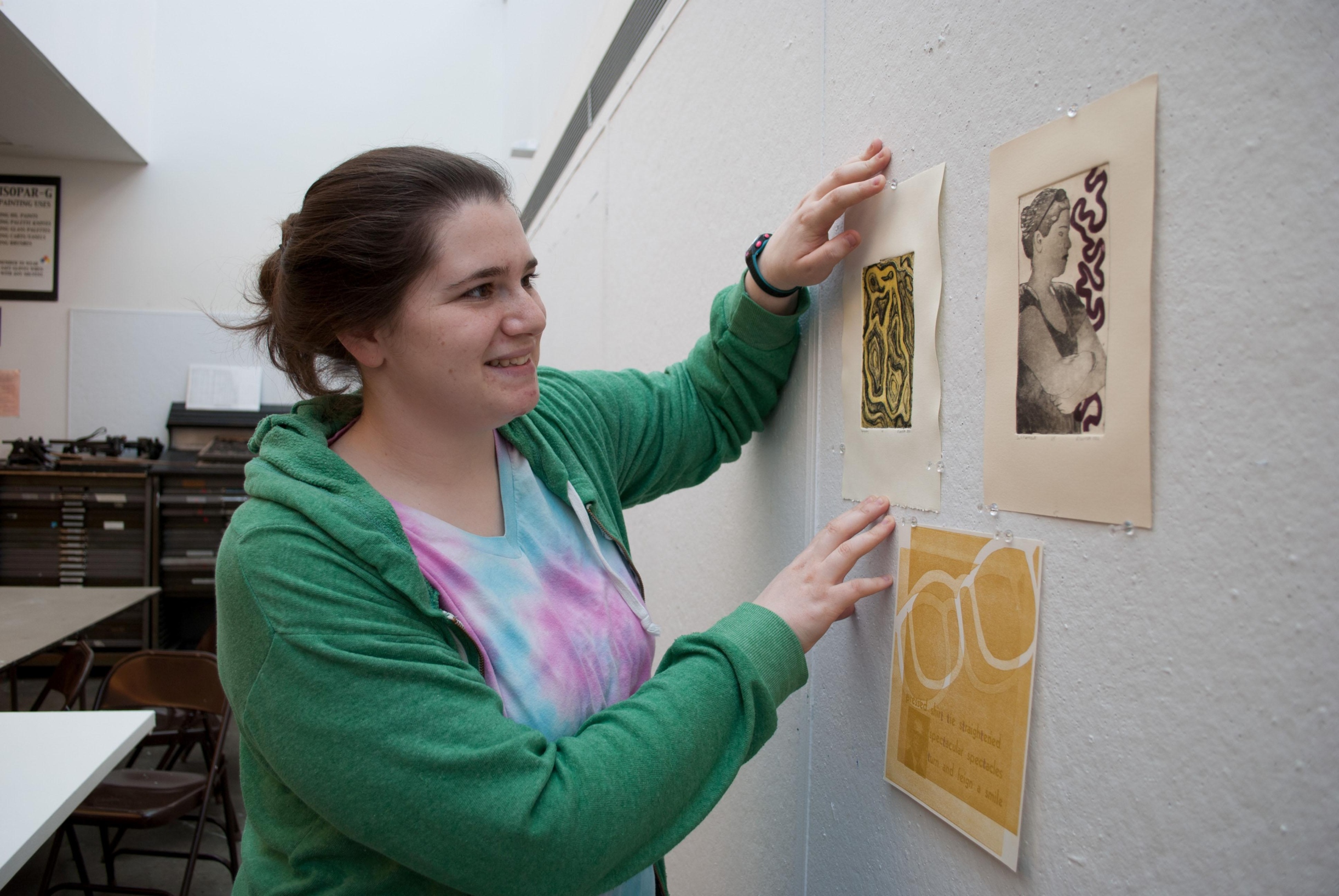 Lawrence hosted the second annual Paper Fox Printmaking Workshop and Benefit Sale on Saturday, April 14, 2012 in the Wriston Art Center. The Lawrence and Appleton communities were invited to browse and purchase various prints that were on sale, designed and printed by both students and various visiting artists.

Profits from the sale went to the Paper Fox Printmaking Workshop and students who created the prints. According to sophomore Cori Lin, who sold some of her own work at the benefit, “30% of the profits [on student work] go to Paper Fox, and the students get the rest of that money.”

Patrons were also invited to view and participate in three demonstrations of different printmaking techniques done by students of Assistant Professor of Art Ben Rinehart’s Intermediate and Advanced Printmaking courses.

The first was a multiple-colored silkscreen, which involved ink being forced through a design printed onto silk or mesh and onto a printing surface. The second was an intaglio, in which a design is incised onto a surface. The surface is then covered in ink, and then the image is transferred onto another surface. The final demonstration was encaustic monoprinting, which uses melted wax to transfer a colorful image onto a page.

According to Professor Rinehart, the goals of the workshop were to educate people about the process of printmaking as an art form and to promote exposure of the program. This is because the PFPW depends on benefits such as this one, of which there are two per year. “PFPW is a self-sustaining visiting artist program,” he explained. “We have artists that come in and produce an edition of prints…they get half, we get half, and the prints that we receive are sold to basically create funds for the next year for visiting artists to come in.”

The benefit was a success, and Professor Rinehart estimated that about 75% of the benefit’s audience was from the Appleton community. This is directly related to part of the Paper Fox’s mission, which, according to their website, is to “lead community engaged programs and projects.”

Professor Rinehart credits this success to the uniqueness of the PFPW in the Fox Cities area. He says, “There’s no institution of its kind in the area, and it is sort of filling that deficit that exists right now.”

The PFPW not only offers opportunities for the broader community to purchase and witness the creation of prints, but it also provides many opportunities for students to combine their passion for art with the development of entrepreneurship skills. Students not only select what visiting artists come to campus to produce their prints, but they also promote and run a large part of the benefit. They are also given the freedom to decide on the pricing of their own works that are being sold. “The students actually play a very strong role in how [the benefit happens],” says Rinehart.

As the PFPW continues to grow, a new addition to the most recent benefit was the sale of student-made ceramics.  Said Rinehart, “Debbie Kupinsky [Uilhein Fellow of Studio Art] is teaching ceramics and actually had some pieces for sale, and we’re hoping that in the future it might be a print and ceramics sale, which would really maximize our audience and probably capitalize on sales, too.”

The PFPW shows no signs of slowing down–from April 24 through April 27th, they will be hosting Emily Martin and Sarah Nicholls, two renowned printmakers and bookbinders.

Rinehart is positive about the future prospects of the program. “We’re hoping that this will go on for a long time,” he says.

To get involved with the Paper Fox, contact Rinehart or the thINK printmaking club.