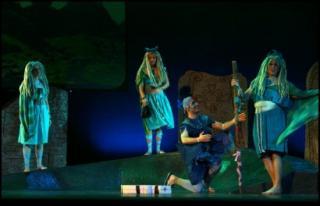 A story of magic, love, deception,
and heroics, the Conservatory production of Wolfgang Amadeus Mozart’s “The Magic Flute” is sure to be a delight for audiences this week.
The plot of the last opera Mozart ever wrote centers around the hero Tamino, who falls in love with Pamina, the daughter of the wicked Queen of the Night. Tamino is sent by the queen to rescue her daughter from the torments of Monostatos and given a magic flute – from which the title is derived – to aid in his quest.
This is the first opera that orchestra director David Becker has conducted at the Lawrence Conservatory, and he says he is honored to be working with the Conservatory voice faculty, stage director Tim Troy, vocal coach Bonnie Koestner, and the young cast of performers.
“A lot of the excitement and energy in this humorous and dramatic production comes from the musical and acting creativity and imagination of these young performers,”
Becker said.
The cast has put in a lot of work toward the success of the opera. The vocalists devoted a great deal of fall term to mastering the music. The beginning of winter term was spent working on stage movement and combining singing with stage movement.
Junior Jesse Weinberg, who plays the comic relief character of Papageno, a simple-minded bird catcher, recalled some of the work that he and Brad Grimmer, another student playing Papageno, have put into developing the character.
“Brad Grimmer and I have worked with our theater fellow, Annette Thornton, to make our movements and actions more birdlike,
as Papageno has not spent much time apart from his birds,” Weinberg said.
Sophomore Alisa Jordheim, who plays Papagena, the lover of Papageno, commented on the uniqueness of “The Magic Flute” compared to other operas. “This particular opera is unique,” she said. “It’s a ‘Singspiel,’ meaning that there is spoken dialogue and singing both.”
“The only thing that keeps it from being a musical theater production is that term hadn’t been invented when it was written,” added Weinberg.
As a celebration of Mozart’s 250th birthday, which occurred Jan. 27, the opera is a wonderful excuse to program Mozart, said Koestner.
“This year we were lucky to have the right combination of voices [for Mozart] and the occasion of Mozart’s birthday celebration,” she added.
The opera is seasoned with the talents of several guest artists, including internationally renowned soprano Amy Shoremount-Obra as the Queen of the Night, Milwaukee area lighting designer Jason Fassl, and costume designer Emily Rohm-Gilmore, ’02.
The production will star Professor Steven Spears as the romantic male lead Tamino. Sophomore Emily Fink and senior Caitlin Cisler will play the female lead Pamina on different performances.
In addition, the production will showcase the talents of several guest artists.
“The Magic Flute” will be performed Friday at 8 p.m. and Sunday at 3 p.m. in Stansbury Theatre. Tickets are $10 for adults, and $5 for students and seniors, and free for members of the Lawrence community, and can be purchased by calling the Lawrence University Box Office at (920) 832-6749. 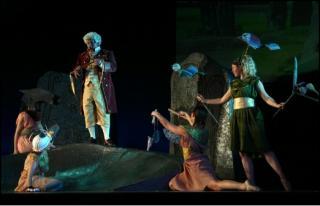