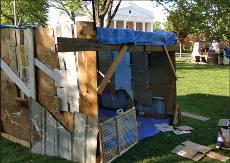 Lawrence students commonly grumble about the community bathrooms or the ’60s-style architecture of their residence halls. However, most students would prefer these accommodations to the “shanty town” constructed on Main Hall Green this past weekend as part of Lawrence’s annual Shack-a-thon, a fundraiser for Habitat for Humanity.
Nearly 20 teams of students from various campus groups including fraternities, residence halls and clubs gathered to build their shacks Sat., May 12. Teams competed to see who, in the opinion of the faculty judges, could create the best shack.
The only catch to the building process was that they could only use found or donated materials. There was also a competition to see which team could raise the most money.
Lawrence began Shack-a-thon five years ago. At last year’s Shack-a-thon, Lawrence met its original goal of $20,000, enough money to cosponsor a Habitat for Humanity house for a Fox Cities family. This year, Lawrence’s goal was to raise an additional $4,000.
Freshman Natalie Grattan helped build Students’ War Against Hunger and Poverty’s shack. Grattan said they found most of their materials after they “went on a dumpster dive.”
The SWAHP team, along with many of their competitors, used wood, nails, Styrofoam, tarps, wallpaper and duct tape in their construction.
Participants had all day Saturday to construct their shacks, and the winners were announced around 5 p.m.
The Brokman team – consisting of Brokaw and Colman residence halls – was declared the winner of the best shack, and the Swing House was given a nod for the beauty of its shack.
The combined team of Trever and Kohler raised the most money, while freshman Carissa Keith raised the most money individually.
After the winners were announced, senior Emily Palmer, Events Coordinator of the Volunteer and Community Service Center at Lawrence, and John Weyenberg, Executive Director of the Fox Cities’ Habitat for Humanity, spoke about homelessness and what Habitat for Humanity does to help.
Weyenberg pointed out that the fastest growing segment of the homeless population is children and that only 15-25 percent of the homeless population is currently employed.
“Every 20 minutes someone [around the world] gets a Habitat home,” Weyenberg said. In the Fox Cities, Habitat for Humanity has provided 83 homes to homeless families since 1983.
Juniors Ashley Korolewski, Grant Anderson, and sophomore Nora Taylor also performed a skit that addressed stereotypes about the homeless.
Shack-a-thon is a unique way to raise money and homelessness visibility. Grattan says this is important to continue because it allows Lawrentians an opportunity for “working together for a cause and to do something meaningful.”
Along with Shack-a-thon, many Lawrentians participated in the other activities that took place on Main Hall Green, including Ormsby Hall’s annual Zoo Days, performances by Lawrence student bands, and a showing of the film “The Pursuit of Happyness. 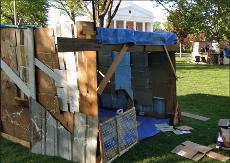