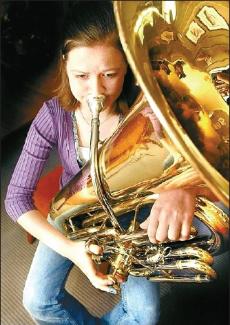 Beth Wiese, a junior from Davenport, Iowa, is a tuba performance major and will be performing the “Concertino for Tuba and Wind Instruments” by Rolf Wilhelm with the Wind Ensemble this Saturday. “It’s really colorful and playful,” Wiese said. “There’s a lot of interaction between the tuba and the band.”Wiese won the concerto competition in January to procure the honor of playing with the Wind Ensemble. Although she is active in other ensembles, Wiese has a special connection with the Wind Ensemble, as director Andrew Mast was her high school tuba teacher. “We came to Lawrence the same year,” she said. “He was the one that made me come.”

Besides Wind Ensemble, Wiese has been playing in the Lawrence Symphony Orchestra for the past two years, as well as playing in the student brass quintet.

For musical influences, Wiese credits her current teacher, Marty Erickson, as a major source of inspiration.

“He’s been very influential in helping me formulate my own concepts of how I want to be as a musician,” she said. “Other than that, I just listen to as much music as I can, and observe as much as I can, and try and take a little bit from everything, and see what I can do.”

Like many conservatory students, Wiese can thank her music for taking her around the country. “Last summer, I toured the state of Louisiana on a barge, playing the tuba,” she said.

The tour was with the American Wind Symphony. “They needed a tuba player, and I needed a job,” she said. “So it worked out really well. We had a cool amphitheater, just floating on the river, playing music.”

After Lawrence, Wiese will “probably go to graduate school, and after that, just do something with music, somehow, in some form, to make a living,” she said. 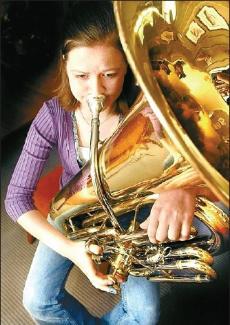