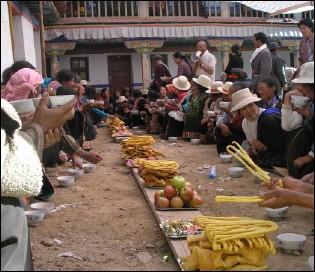 Lawrence senior Alan Jameson had many adventures in China, including taking part in this housewarming feast (Alan Jameson)

Unfortunately for my storytelling, but fortunately for my Chinese skills, the vast majority of my time in China during fall term was spent studying. In the six months I was there, I was given three weeks to travel. During this time, I went to the part of China potentially most famous to foreigners – Tibet. The first thing you should know about the Chinese – Tibetans included – is that they love foreigners and especially love Americans. Some Chinese love Americans because of a genuine interest in the United States, some because they can be cheated into paying higher prices for products, but some love Americans with the hopes of being brought home by one.
While traveling in Tibet, a classmate who was traveling on his own was planning on meeting with us. We were told he had made a friend. Apparently, our classmate had offered to pay a Buddhist nun’s bus fare and apparently
she was showing him around the area to repay him. When we met, we quickly realized that we were going to have some language trouble. Mandarin Chinese was a second language to us all, allowing us to understand only half of what was said. Still, politeness and excitement seemed to cover over our mutual misunderstanding.
We woke up early the next morning and the nun showed us around the local monastery, which we circled counter-clockwise while turning prayer wheels before entering.
The monastery was set up to capitalize on visiting tourists, including entrance and photography fees, but because the monastery had not officially opened, many of the shrines were still closed. Our new friend tried to sneak us in a few times and encouraged us to take pictures when nobody was looking. At one shrine, we sat in a semicircle and listened to our friend and another monk chant some prayers using a very nasal, deep tone. It was very relaxing and surprisingly hypnotic to the point that I was concentrating on the chant and not on the fact that I was about to fart. That was awkward.
Afterward, she took us to the nunnery at the monastery. We were given no instruction before entering and the only warning I remember was the chanting of 30 nuns growing louder as we got closer. The sight was rather stunning, but I tried to ignore it and pay attention to what I was supposed to do now that 30 chanting nuns were staring at us. We followed our friend around the nunnery, bowing where she bowed, touching our heads to what she touched, and draping a white silk over the altar. When we finally sat down in the comfort of a dark corner, I was able to take in my situation. Roughly 15 nuns sat on a row of pads lining the main path. This path lead to the leader of the nunnery who sat in front of the altar where we laid our scarves. Pictures of bodhisattvas filled every section of wall. Dark wooden pillars supported a very high ceiling, from which hung what I can best describe as chandeliers of brightly colored neckties sewn together. All of this was stunning, but the chanting was by far the most memorable.

Alan Jameson Lawrence senior Alan Jameson had many adventures in China, including taking part in this housewarming feast (Alan Jameson) Unfortunately for my storytelling, but fortunately for my Chinese skills, the vast majority of my time in China during fall term was spent studying. In the six months I was there, I was given three…