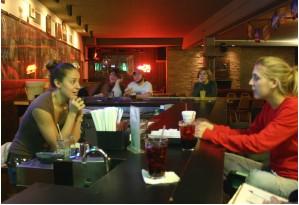 With campus center plans going through, frequenters of the VR have questioned whether the popular venue will remain in its current location
Sarah Morton

With campus center plans going through, frequenters of the VR have questioned whether the popular venue will remain in its current location (Cora Schroeder)

The ongoing discussion about the impending addition of the new campus center has inevitably given rise to many rumors and speculations. Among them is the question of what will be done with the spaces abandoned
by groups and offices moving to the new building.
Early plans and ideas for the renovated
Memorial Union – which include classrooms, offices and other academic spaces – do not seem to include the Viking Room. The Viking Room, a place of community for Lawrentians of legal drinking age, appears to be in a state of limbo, planned for neither the Union nor the campus center.
However, according to Lawrence officials, the bar is not in as much danger as it may seem.
Professor Beth DeStasio, who sat in on one of the brainstorming sessions, explained, “The idea at that time was that [the Union] would be renovated to become an academic building with a tiered lecture hall like Wriston, and other types of classrooms.”
Unlike many of the features of the Union – such as the grill, student store and lounge space – the Viking Room will not move to the new campus center.
The plans for the new building do not include the campus bar in order to allow all students access to every area of the campus center.
President Jill Beck confirmed this plan. “The Campus Center’s square footage is planned for uses that will be open to everyone,” she said, “such as spaces for clubs and organizations, dining, convenience store, etc.” With regard to the Viking Room, however, Beck said, “The Viking Room will be preserved where it is.”
The fact that early plans for the renovation of Memorial Union do not include the Viking Room and the official statements from Beck and other high-level campus officials should not alarm students. Administrators assert that the future of the beloved campus bar is contingent on future decisions that will be made with input from the Lawrence community.
Dean of students Nancy Truesdell said that nothing is definite yet. “I do not believe that any firm plans have been made for the reuse of Memorial Union or Downer once the new campus center is built,” she said. “I know there were discussions of possible plans and uses, but I do not think any decisions have been made about future use of those spaces.”
Beck added, “A few years from now, we hope to be able to do some renovation in the Memorial Union following the construction of the campus center. At that time, we will take into account that the lower level contains the Viking Room. As with the campus center, faculty, staff and students will be consulted.”
Plans for the Union will not be set in motion until after the campus center is completed, allowing time for specific planning and fine tuning.