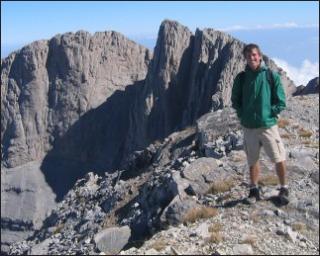 Studying ancient Greek civilization in Athens last fall left me with a number of amazing experiences, but hiking to the summit of Mount. Olympus will remain etched in my memory forever. It was already October, and with the trails closing soon, my roommates and I made a day-of decision to make the trip.
It all began with a midnight train ride. Being dirt poor, I bought a standing-room-only ticket for about $10. Upon boarding the train, however, my friends and I commandeered a cabin, and after shutting the blinds and locking the door, we settled down to sleep, somehow avoiding those who had actually purchased the tickets for the cabin.
We were rudely awoken around 5 a.m. by some Greek guy who hardly spoke English, and all he was saying was “Off! Off!” We hurriedly jumped off the train, only to find a completely deserted train station literally in the middle of nowhere. All I could see were fields and a highway, and because the sun hadn’t risen yet, there was no sign of life.
Following a silent bus ride into the small village, we found a cab that would take us to the trailhead. Finally arriving, we hopped out and began our climb to the top. Settling down for breakfast – the sun still hadn’t come up – we were approached by a mangy-looking dog. We threw him some pita bread and continued climbing. After about an hour, the very same dog was just sitting on the trail ahead of us. We quickly became enamored of the dog, and Hermes (the name we gave him) followed us all the way to the top.
We hiked for several hours in what was perfect weather, stopping only briefly at the lodge where most hikers spend the night. At one point I looked back down the steep trail to a cliff ledge and saw clouds being funneled up over the cliff and directly at us. It was one of the most breathtaking sites I have seen.
After the most brutal two miles I have ever hiked – we had to stop every 50 feet to catch our breath – we reached the summit, nearly 3,000 meters above sea level. We huddled down in the small shelter – just a wall made of rocks – to eat lunch and get out of the cold, along with our faithful guide Hermes.
The hike down was uneventful, and after stopping at the lodge for a snack again, Hermes finally deserted us in favor of another group going to the top. We reached the trailhead, where luckily a cab was waiting for other hikers who had yet to show up. Exhausted, we jumped in and rode back to the village.
We found a train heading back to Athens, and – standing-room-only tickets in hand – boarded and found some nice places on the floor to settle in for the five-hour train ride home. Dominated by the mountain, we trudged back up to our apartment, broke out a six-pack of Mythos, our Greek beer, and simply marveled that we had climbed to the home of the gods.

Ben Decker Ben Decker enjoys some quality time atop a mountain in Greece (courtesy of Ben Decker) Studying ancient Greek civilization in Athens last fall left me with a number of amazing experiences, but hiking to the summit of Mount. Olympus will remain etched in my memory forever. It was already October, and with the…