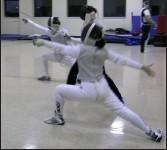 Tucked away in the bowels of the Rec Center lies a tiny office. Within this office is a jumbled mass of newspaper clippings, padding, and electrical components.
Looking more like a high school shop classroom than a coach’s office, this is where Lawrence’s most hidden athletic program is run. Only curious frequenters of the weight room know that this is, of course, the office of LU fencing team.
Started as a club in the mid ’60s, the fencing team has since moved to NCAA status. Because of the small pool of schools sponsoring varsity fencing teams, the sport is limited to one division. This forces Lawrence to compete against vastly larger schools such as Notre Dame, Michigan and Ohio State.
“Competing against big schools is a huge disadvantage for us,” says head coach Steve Amich. “Larger schools have many more students to draw from as well as the opportunity to give scholarships.
This immediately separates us from them.”
Unlike Lawrence’s other NCAA sports, a large percentage of fencers come into the program with no or little experience with the sport. It is left up to the team and the coaching staff to recruit incoming freshmen.
This year, however, has been somewhat
of an exception. “We have a group of freshmen who have previous fencing experience,” notes Coach Amich. “They should be a big help in coming years.” He suggests that Lawrence has indeed carved a little bit of a monopoly on fencers who would like to go to a small school. “We can promise them a spot on the varsity team, whereas other schools can’t,” says Amich.
Having no home meets this year, the teams remain – similarly to Amich’s office – almost invisible to the Lawrence community.
Next year, however, the Midwest Regional meet will be held on campus. Coach Amich is content with the level of presence the team has, but is excited to host the event for the first time in a decade.
Given a full roster, each team – men’s and women’s – brings nine competitors to every meet. Three events feature three athletes apiece. The sabre, foil and pe weapons vary in size, mass, flexibility, and the way legal touches are scored.
All things considered, the teams do pretty well for themselves. Last weekend, both teams competed at the University of Notre Dame duals in South Bend, Ind. The men went 3-5 on the weekend and the women accumulated a 1-7 record. Both teams defeated fellow small school Oberlin and the men picked up victories over Northwestern and U. of Chicago. “I’d like to see what would happen if our football team went up against Notre Dame,” jokes Amich.
In 1995, Lawrentian Michael Gattnar won a national title in the pe division before accepting a scholarship to compete for Harvard. He remains one of three national champions (the other two were swimmers) in history of the school, and the only one in Division I. Coach Amich hopes to have at least one competitor back at this year’s National Championships in Houston. If so, we can be certain that they will stand out in a sport dominated by larger, wealthier schools.

Alexander Weck Lawrence fencers prepare for their upcoming meet (Alex Fairchild) Tucked away in the bowels of the Rec Center lies a tiny office. Within this office is a jumbled mass of newspaper clippings, padding, and electrical components.Looking more like a high school shop classroom than a coach’s office, this is where Lawrence’s most hidden…