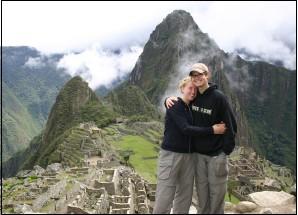 During fall term 2004, I had the opportunity to study abroad in Buenos Aires, Argentina with IES to study Spanish. It was easily both the worst and greatest experience of my life. On the academic side, my seven years of Spanish study put me in a beginner’s Spanish section with other students who had studied Spanish for only a semester. As a result of this, I was unable to complete my Spanish major here at Lawrence. However, upon taking control of my time abroad, I had the greatest time of my life when I was there.
My greatest experience – after the jazz bars, art, cooking classes and touring the city every chance I had – was when I traveled to Cusco, Peru with a group of friends.
It started in the airport in La Paz, Bolivia. My companions and I were stranded overnight in the airport with armed security guards patrolling the corridors. My first experience with the 3,510-meter altitude change was a run-in with “malaltura,” commonly known as altitude sickness. It was not a pleasant
night in the airport. When the shops opened in the morning, a good friend of mine got me a cup of “mate de coca” – a tea brewed from leaves from which cocaine is extracted. South Americans from these high altitudes chew on the leaves of the coca plant to fight the effects of malaltura.
We traveled onward to Cusco, Peru and took in this amazing Incan city. Houses are built into the mountainside, and the surrounding area is full of Incan ruins. One set of ruins, named “Sacsayhuaman,” lies on the mountain overlooking the city. Some stones from this ruin are at least four times as tall as an average person. All of the stones fit perfectly together with absolutely no space between them. These stones are similar to what we saw in the famous city in the mountains, Machu Picchu.
Machu Picchu was a flourishing Incan city, with altars, an industrial section, housing, and multiple sacred temples that was mysteriously abandoned centuries ago. When we arrived there on a rainy morning, after a 5 a.m. bus ride up the zigzagging
switchbacks of the mountain, it looked like it was practically untouched.
There are many levels of terraces which were used for farming, and each stone is placed together perfectly. As soon as you enter the city, there is this overwhelming aura of mystique that overcomes you. You cannot see the populated town below through the clouds and you feel a connection to nature. At Machu Picchu, no stone went unused; every building
was built in a way that did not disrupt the natural surroundings. It is truly indescribable beauty.
While there, we got an in-depth tour of the city. We took a muddy two-hour hike to the Sun Gate, the ancient entrance to the city. Due to the rain, we were able to see the irrigation systems function properly – something not many people get to experience during their journey. By the end of the day, the sun was shining and there was so much left to be explored. We lounged on a terrace near some alpaca and waited for the final bus to come take us home. As we zigzagged down the mountain, I watched as the city mysteriously vanished into the clouds and thought to myself how lucky I was to have experienced such natural beauty.

Lou E Perella Lou E Perella and Elizabeth Hermanson at Machu Picchu in Cusco, Peru (Lou E Perella) During fall term 2004, I had the opportunity to study abroad in Buenos Aires, Argentina with IES to study Spanish. It was easily both the worst and greatest experience of my life. On the academic side, my…