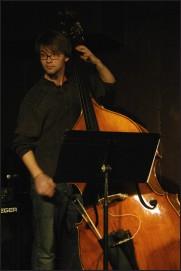 Every Monday night from 10-12 p.m., a number of Lawrence’s jazz musicians indulge fellow students with their sweet tunes. The last performance was particularly well-received when bass instructor Mark Urness graced the stage with his presence.
The relaxed personality
of the Underground Coffeehouse and the great music make it a really nice and comfortable
atmosphere. Some students come with homework to do while others chat and drink coffee.
April West said she enjoyed the music and atmosphere at this week’s session. “The coffeehouse was more crowded than I’d ever seen it,” said West.
Caitlin White agreed. “I was really impressed with the number of people
there to just listen to the music,” she said.
The show has little structure and varies from week to week depending
on who can make it. Anyone who is interested is encouraged to come and play.
Throughout the night, different
instrumentalists trade in and out, creating a more diverse sound. Although the program varies, and new players attend each week, everything seems to work together and flow well – a testament to the kind of talent the players possess. The students that play during the open jam session take their art very seriously. Improvisation is no simple task. Because improvised music is played on the spot, it’s very internalized.
Students look up to many jazz artists such as Thelonious Monk, Herbie Hancock, and Ray Brown for their inspiration. And who knows, maybe someday these young musicians
will be considered jazz greats themselves.
Greg Woodard explained, “Whatever you feel like playing just comes out.”
So try to make it down to the coffeehouse on Monday nights and study with some style for once.