Four-lane bridge was originally proposed a decade ago 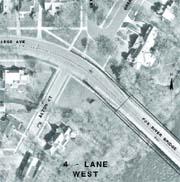 An overhaad of the proposed new bridgeÂ´s location (right) east of campus on College Ave. marks off the land on either side of the street that would be affected by the addition of two lanes.
Jonathan Isaacson

An overhaad of the proposed new bridgeÂ´s location (right) east of campus on College Ave. marks off the land on either side of the street that would be affected by the addition of two lanes.

The College Avenue Bridge handles over 21,000 vehicles daily, a number that the Wisconsin Department of Transportation (WisDOT) predicts could increase by more than 25 percent in the next quarter century. A $1.2 million maintenance project in 2002 extended the life of the bridge through 2008, when reconstruction is scheduled.The current bridge was built in 1960 and has neared the end of its safe life. While the bridge met all standards in 1960, it is now showing severe fatigue and flaws. The new bridge would have a lifespan of approximately 70 years, more than 20 years longer than the current bridge, according to WisDOT, “if for no other reason than our engineering and construction materials are better today than they were in 1960.”

It was over the nature of this rebuilding that local citizens petitioned to get a referendum on the ballot for this month’s election. The referendum asked that the bridge be rebuilt as a two-lane bridge, as it is currently. Long-range plans from the city and from a federally approved planning commission have the bridge being rebuilt with four-lanes.

The referendum was voted down by a margin of 56 percent to 44 percent when voters went to the polls on April 6. The defeat of the referendum all but ensures that the reconstruction in 2008 will increase the bridge to four lanes of truck and auto traffic, as well as adding a bicycle lane and sidewalk on either side.

The four-lane replacement option has been endorsed by federal and state agencies, citing the hope to alleviate a potential bottleneck on one of the city’s main east-west arteries. In an assessment made by the WisDOT, a four-lane bridge is desirable in part due to the fact that College Avenue is part of the Federal Highway System, potentially providing a multilane “corridor that would afford the urban area with connectivity from WIS 441 west to the Outagamie County Regional Airport, including a connection to US 41.”

As early as 1994, it was recommended that the College Avenue Bridge be expanded to four lanes to accommodate the expected traffic flow in years to come. Now, DOT officials believe that the limited capacity of a two-lane bridge would render it obsolete almost immediately.

Federal and state authorities have suggested that the city would have to saddle a larger percentage of the bill if a two-lane bridge were built. While no concrete figures are yet available, city officials estimate that Appleton might have to pay $2.3 million for the four-lane replacement.