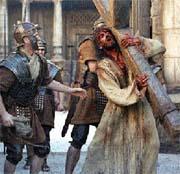 Jim Caviezel stars as Jesus in Mel GibsonÂ´s blockbuster. Unless you want to see such a rising star (Caviezal, that is), Cleaveland suggests that you save eight bucks and catch a made-for-TV movie.

It may be a month and millions of dollars later, but how could I allow the end of the term and spring break to rob me of the opportunity to comment on what could be the largest grossing film of all time, and quite possibly the most controversial as well?After movies like “The Last Temptation of Christ,” “Stigmata,” and “Dogma,” and the publication of Dan Brown’s “The Da Vinci Code” last year, I really don’t see what all the fuss is about. As if religious unrest surrounding a controversial piece of pop culture were something new and unusual. Excuse the pun, but heaven forbid Jesus should step onto the big screen, lest fervent Judeo-Christians shift uncomfortably in their seats.

I can sum up Mel Gibson’s portrayal of the last hours of Jesus Christ in a single word: overrated. Not only have audiences blown the anti-Semitic controversy out of proportion – the film itself achieves nothing of cinematic excellence.

I’m almost disgusted that audiences have chosen shock value over superior filmmaking. Amazing make-up and extraordinary gore do not make a good film, but these seem to be the basis for this film’s praise. At certain times – for example, the Monty Python-esque spurting of blood after the piercing of Jesus’ side – the effects even becomes absurd.

The greatest detriment to the film is that director Mel Gibson tries to be historically accurate, biblically factual, and also adopt a metaphorical interpretation of the bible. Each provides an antithesis to the other two. Had he chosen a specific path, perhaps the end result would have been less irritating to those of us who raise eyebrows at a Crucifixion seen through the palms or the strange distribution of an androgynous Satan throughout the film.

Jim Caviezel gives an extraordinary performance, quite possibly the best of the year. I am grateful for the film if only because it has thrust his talent into the coveted Hollywood spotlight.

I cannot deny that Gibson has an eye for filmmaking. While his many mistakes make his production choices seem juvenile, he has a brilliant grasp of the effects of camera angles. He provides shots most directors wouldn’t think of attempting. His proficiency in this regard – and various other directorial decisions involving lighting, blocking, and close-ups – makes up for his poor decision in the ridiculously frequent use of slow motion.

It is a technique for emphasis. Gibson does not need to use slow motion every time Jesus falls down or is hit. We get the idea. Were these numerous instances shot in real time, the film would be at least half an hour shorter.

If you are one of the few who have yet to see “Passion,” save yourself eight dollars: record one of the many made-for-TV Jesus movies on network television and play it back in slow motion. Aside from the gore, it’s pretty much the same thing. C+.

Carrie Cleaveland Jim Caviezel stars as Jesus in Mel GibsonÂ´s blockbuster. Unless you want to see such a rising star (Caviezal, that is), Cleaveland suggests that you save eight bucks and catch a made-for-TV movie. It may be a month and millions of dollars later, but how could I allow the end of the term…