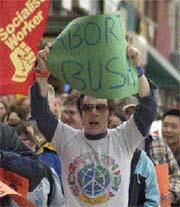 Rob Ryan, a Lawrence Junior SLA member, marches downtown in protest of President Bush. A group of Lawrence students joined over one thousand community members to protest during BushÂ´s visit to (Isaacson, Jonathan)

Palestinian flag in hand, Saleh Hijazi argued his case outside the NBC TV station downtown. Hijazi and a local Bush supporter engaged in some verbal sparring after the Bush supporter, watching the live broadcast of the president’s speech Tuesday during the lunch hour, had commented that Bush was protecting America from the Islamic people.A small crowd gathered with several Lawrence students and a few “townies” supporting Hijazi as he argued with a small contingent of Bush supporters watching the speech on their lunch break.

Hijazi had marched downtown earlier, Palestinian Flag fluttering in the breeze, at the head of a sizable contingent of fellow Lawrentians who set out to join the protesters who had converged on Appleton in advance of George W. Bush’s arrival.

Shortly after morning classes let out, Lawrence students and faculty met in front of Memorial Chapel and began their march downtown to join the other, already assembled, protesters.

Hijazi, a Palestinian international student, was not surprised by the argument. “I kind of expected to have that kind of clash,” he said. He also noted that for him, this protest, against Bush was different than the protests at home where Palestinians, living with Israeli occupation, are very limited in their movements and protests revolve around Israeli occupation.

Other international students came out with messages emblazoned on placards and signs, including one that read, “International Students Are Not Terrorists,” a slogan applauded by many of those at the protest who opposed Bush.

Lawrence students were joined by several faculty members as well, including several members of the English department.

Hollis was glad to see as many people out as there were. “It’s important to stand up and be counted,” she said.

By no means were all Lawrentians protesting against Bush and his policies. Members of the Lawrence University College Republicans (LUCR) volunteered to work at the Performing Arts Center during the speech and came away from the day’s events with a very different perspective.

Jon Horne felt that the protests were typical of this year’s election, pitting those who approve of Bush against those who oppose him. “No one seems genuinely excited about [John] Kerry,” he said.

Other members of LUCR felt that the protest was largely ineffective. Rob Boeckman expressed his opinion that protests are rarely effective. “[Protests] never sway anybody, they just show your presence,” he said.

Sarah Leet also expressed her skepticism towards the protest. “If you are going to protest, have an issue to protest,” she said.

Nevertheless, Tim Spurgin, chair of the Lawrence English faculty and a member of the Lawrence protesters, was pleased by the turnout. “The assumption is that Appleton is a really conservative town. It’s nice to remind people there are liberal folks in the community,” he said.