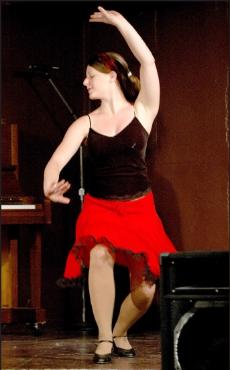 The feel of the LU coffeehouse, usually resonating with jazz or acoustic band rhythms, transformed last Tuesday evening when an invasion of Spanish students brought back the “literary caf.”
The literary caf is a tradition that calls to mind images of rooms hazy with cigar smoke, filled with avant-garde intellectual discourse and artistic collaboration. Without breaking fire codes, ­VIVA! made its “Noche de Poesia” such an artistic success.
­VIVA! arranged the Noche de Poesia, their third annual, so that Spanish students at Lawrence could share their personal favorite aspects of Spanish-speaking culture with each other and the Lawrence community.
This year, a number of well-dressed students and their professors read a wide variety of poetry, celebrating the artistic traditions of Latino, Hispanic, and Spanish cultures.
The diversity of the readings included such greats as Pablo Neruda, Gabriela Mistral, and even the monotheistic Aztec Nezahualcoyotl, who wrote in free verse during the 15th century.
In addition to poetry, Tuesday’s event included musical and dance performances. According to co-president of ­VIVA! Teresa Hardison, Noche de Poesia was strictly limited to poetry in previous years, but expanded this year due to the diverse interests of students.
Dario LaPoma, a freshman pianist at Lawrence, opened the night with a piece called “Quiet Nights by Quiet Stars,” characterized by soft and sultry melodies. The next piece he played included the famous “Girl from Ipanema” tune, rendered contemplative by LaPoma.
The next six performers read pieces of poetry or prose from the authors of their choice. Sara Novak and Emily Palmer read excerpts from short stories that deal with issues of identity, especially the conflict of identity from the perspective of a Latina living in America.
These pieces evoked the strength of women who persevered despite the double confinements of family and a male-dominated society.
Assistant Professor of History Jake Frederick, who specializes in Latin American history, read a series of poems by Nezahualcoyotl.
Nezahualcoyotl is unusual both because of his poetry and his own peaceful brand of monotheism in a culture strongly dominated by violent polytheistic traditions.
The poem, “Cuicatli quicaqui” or “My heart hears a song,” is comprised of sounds that differed strongly from the previously recited Spanish, providing a sharp image of how Spanish culture had effectively crushed indigenous culture since their conquest of South America. Frederick noted, “No one would be able to correct me even if I mispronounced a word.”
Senior Megan Allen recited a poem that she has been studying since she’s been a student at Lawrence. “Every time I translate it, I get a new sense of the poem,” Allen said. “The lines ‘You are like the night / Quiet and constellated / Your silence is of the stars’ especially give me a sense of peacefulness and space.”
To end the program with a blaze of power and sound, Valeria Rojas and Jamie Gajewski performed a flamenco, which incorporated rhythmic stomping and elegant arm and hand gestures as if they were sweeping away hordes of adoring fans. 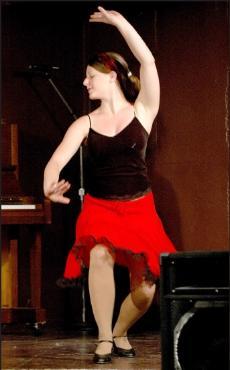