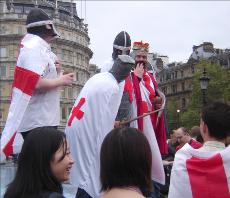 King Arthur, St. George, John Cleese and Ken Livingstone. Most likely, only two of these names hold any significance for you guys on the west side of the pond. King Arthur because he’s the mythologized first king of England – and, has anyone seen Disney’s animated tale of Arthur, “The Sword in the Stone”?
John Cleese is obvious. He and his crew (best known as Monty Python’s Flying Circus, for those of you who may have resided under a rock growing up) made the other film tribute to the great first monarch of jolly old England.
This past Monday, one event brought the four men together. April 23 is St. George’s day, England’s (not Great Britain’s, the difference is quite big) national day, which is kind of like the 4th of July but is more just a nominal celebration of the patron saint of England, St. George. It’s not even a holiday.
The day has its roots in the 12th century when Richard the Lionheart adopted St. George and the flag of St. George, a red cross on a white background, as England’s.
It seems like this day has never had much recognition, however. This year London’s Mayor Ken Livingstone (whose little signature is Mayor of London) decided to make a weekend out of the day. The weekend’s events celebrated the history of prolific English humor (sort of apt for a day which is never taken seriously anyway), starting with a daylong showcase of various film shorts and clips from many decades of humorists and culminating on Monday night with a large-screen showing of “Monty Python and the Holy Grail” in Trafalgar Square.
Monday’s activities started with over 4,000 people showing up to break the world record for coconut orchestras (they did, by quite a lot), led by the cast of Terry Gilliam’s and Terry Jones’ “Spamalot,” the musical based on the Holy Grail. One of the many free London newspapers, the London Lite, has a little blurb and photo showing that Gilliam and Jones were actually there (I didn’t see them unfortunately), leading the orchestra and doing their part for good old George.
It was, I think, a very appropriately English event (Way to go Mr. Livingstone!). It was the first time since arriving here that I have not been surrounded by immigrants or tourists. Everyone that I heard was very English. Folks sipped cans of beer, pre-mixed gin and tonics, and Pimm’s (Google it), smoked a lot, and quoted along with the film. Some wore the English flag of St. George on their backs like capes. A couple of blokes got up and danced, unabashedly, with the song “Knights of the Round Table.”
Even the choice of movies was absolutely right. Besides the fact that Monty Python is the biggest and most recognized name in English humor (Ricky Gervais is getting up there, though), the actual subject matter was perfect. It’s ridiculously silly, but the film does show Arthur as a pretty serious guy. He predates the adoption of St. George by a few hundred years and he is even more important a marker for the beginning of the great monarchy.
The 20th-century equivalent to King A. and St. G. seem to be the comedians that are so present and so well known. As I said, Ricky Gervais is the new name synonymous with English humor (if you don’t know him yet, you will soon). He might as well be the new PM; the world would be better. But, of course, John Cleese, Terry Gilliam, Terry Jones, Eric Idle, etc. (the rest are less famous, sorry!) virtually invented English humor, or at least made it internationally known. What great guys to celebrate on a day which celebrates England.
St. George’s day is not well known, but Ken Livingstone certainly made it good fun. 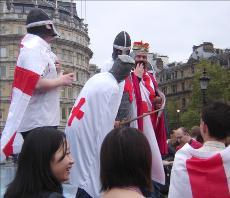