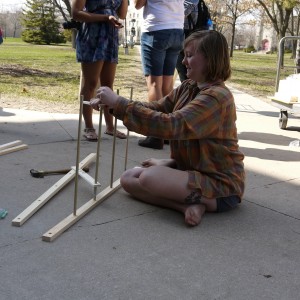 In celebration of Earth Day and as a conclusion to Earth Week, Greenfire hosted the 23rd annual Greenfire Earth Week: Thought to Action Festival on Saturday, April 27, from 1 p.m. to 3 p.m. The festival took place on the green in front of Main Hall on a warm day with a blue sky. The festival was made up of many tables from different campus organizations. Each organization provided information or an activity related to an earth-relevant topic.

Junior and Greenfire president Chelsea Johnson commented, “Earth Day has become unfortunately kitschy at a time when it needs to be more inspirational and educational than ever.”

With this in mind, members of Greenfire attempted to plan the Festival as well as two weeks of Earth Day activities around this year’s convocation theme: “Thought to Action.” This was done by planning events that could inspire environmental action beyond admiring the earth.

Event planning began in the middle of Winter Term and continued through Spring Term. The entire club took part in the planning of the week by contacting speakers and clubs while others made food.

During the festival, as on-campus musicians provided music, Lawrentians circulated amongst the tables as they learned about issues being promoted and did activities related to those issues. People for Animal Welfare (PAW) facilitated the recycling of glass bottles by using them as planters, while Geology Club used local rocks to make jewelry. Magpie recycled T-shirts into headbands, while The Lawrentian made old newspapers into hats. Kappa Kappa Gamma connected Earth Day to their national philanthropy of “Reading is Fundamental” by making old cardboard into bookmarks. Several students ran an informational session on Veggie Mondays. Greenfire provided food and had a station at which people could build their own drying racks, which help conserve the energy used by drying machines.

Those who attended were impressed with the variety of activities present as well as the ‘interesting’ information that they gained.

Earlier in the week, a series of events took place that included a forum on radical environmental activism, the movie “Chasing Ice” and a speech by activist and author Winona LaDuke.

Currently, Greenfire is working on a variety of projects for the rest of this year, as well as some long-term plans. These plans include a divestment campaign, which involves encouraging Lawrence to divest from dirty energy investments. They also include dealing with the Wisconsin SB1/AB1 bill that was enacted into law earlier this year and which relates to iron mining regulation. Some on-campus projects include facilitating battery recycling and installing bee hives.