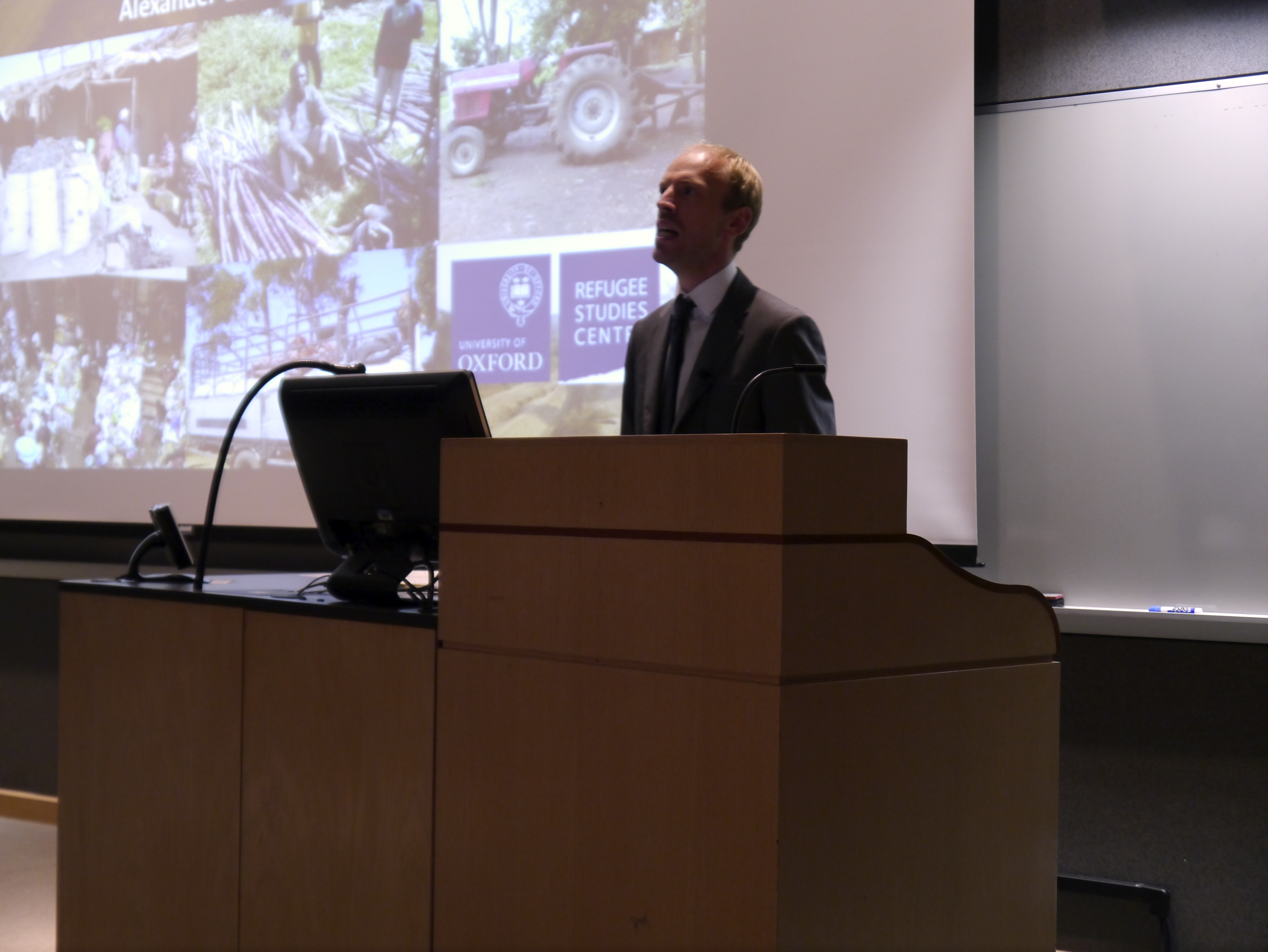 The entrance of the private sector into the field of humanitarianism was explored during a lecture given on Tuesday, Oct. 1 by Alexander Betts, Ph.D., a lecturer in Refugees and Forced Migration for the Humanitarian Innovation Project at the University of Oxford. Dr. Betts’ lecture, titled “Humanitarian Innovation: Refugees, Technology and the Private Sector,” was the first in this year’s Mojmir Povolny Lecture Series in International Studies.

The lecture gave an overview of research currently being conducted in refugee communities by Dr. Betts, who also holds the title of Hedley Burch Research Fellow in International Relations at Oxford. The Wriston Auditorium was full of students and professors from a variety of departments, including government, economics, history, mathematics and physics.

Dr. Betts’ research takes place largely in Uganda, where he and his team have made observations of how technology plays a role in the daily lives of refugees. Most importantly, their research has tried to describe how the private sector might have a bigger hand in facilitating the entrepreneurial ambitions of the refugees, who want to start businesses in their temporary communities but are not given the resources.

Dr. Betts was initially moved to do research on refugee issues during an internship as an undergraduate. For a summer, he had the opportunity to work at a reception center for asylum seekers and refugees in the Netherlands.

“What struck me most,” he said of his experience, “was that there were extremely talented people—doctors, lawyers, nurses—who, because of the circumstances in the Netherlands where they were hosted, had no right to work and no freedom of movement. That was one of the things that inspired me […] not pity, but the sense of opportunity—the sense of currently lost opportunity. That if we could empower such people, the response to refugees and displaced communities could be very different from how it is today.”

Some years later, Dr. Betts spent some time at Stanford University, “surrounded by entrepreneurs and technos.” It was here that he realized that the private sector could actually be very useful in helping refugees reach their goals of being self-reliant.His time at Stanford became a stepping-stone to the research he and his colleagues are now conducting in Uganda.

Dr. Betts’s preliminary findings show that the economies of refugee communities must not be looked at as isolated systems, but instead as economies that partake in international trade. Additionally, not all refugee communities are completely supported by governments—the private sector already plays a hand in some places.

As an example, Dr. Betts described IKEA’s philanthropic efforts to help refugees. The company spent time developing a pop-up shelter for refugees that is more durable than traditional refugee shelters, which are closer to tents.

Dr. Betts argued that aid from the private sector could be taken one step further—that instead of just making donations of products to refugee communities, private companies could also look at innovation in the form of business models and processes that involve the refugees and give them valuable skills. These companies could provide a valuable and empowering education for refugees.

Students gave an overwhelmingly positive response to the lecture.

Senior Helina Asefa agreed with Kulee. She added, “He made me see a different side of the refugees’ situation. I always thought of refugees as the population that needs to be helped. He reminded me that these are people with capabilities. They are capable, and they are educated people, but we don’t notice that.”

Senior Armelle Otou Minkala said Dr. Betts’s findings had longstanding implications because they showed that “innovative ways to look at problems involving refugees work better, especially in recent years.” She added, “He had a lot of evidence to support that point.”

For Otou Minkala, the most significant part of Dr. Betts’s research was his effort to integrate his team into the community by making the community his team, thereby giving Ugandans valuable work experience and providing an example for private sector companies.

According to Lawrence’s website, the purpose of the Povolny Lecture Series is to “promote interest and discussion on issues of moral significance and ethical dimensions.” The theme for this year’s lecture series is “Social Entrepreneurship, Human Rights and Sustainable Development.” The next lecture will be given by Tal Dehtiar, founder of Oliberte Footwear, on Wednesday, Nov. 6.