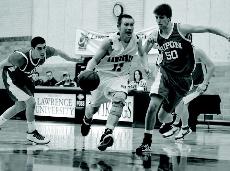 Lawrence University Men’s
Basketball took on Ripon College
in its last game of the season
last Saturday. It was an emotional
day for the seniors, who donned
the Lawrence jersey for the last
time and were honored before the
game.
This would also be the first
year for the current class of seniors
in which they did not progress into
the postseason.
In the game, the team finally
found the shooting rhythm
they had searched for all year.
Despite launching up 27 threepoint
attempts, the Vikings shot
an impressive 63 percent from
beyond the arc. The Vikings’ 17
three-pointers made in the game
fell one short of the Lawrence
record, which was set in 1996 and
tied in a game against Lake Forest
in 2009.
Injured senior Jamie
DeMatthew got the start for the
Vikings, though, as he was unable
to play, he was subbed out immediately
for fellow senior Yui Ueno.
The game remained close for
the first 11 minutes, after which
Ripon led 24-23. Then the Vikings
heated up, sinking six of their next
seven shots to grab the lead and
run the score to 40-30. The Vikings
never led by fewer than 10 points
after that point.
They took a 23-point lead into
halftime, and the second half was
full of more run-and-gun shooting
from the Vikings. The final score
was 104-90 – a season-high in
points scored and the second-most
for the season in points allowed –
in favor of the Vikings.
Senior John Dekker led all scorers
with 26 points, shooting 50
percent from the floor in the game.
Fellow senior Dustin Lee added
a terrific performance, going 5-6
from the field and netting with a
total of 17 points.
Ueno impressed with a career
high of 11 points on 3-4 shooting.
Juniors Jon Mays and Erik
Borresen showed promise for
next season, chipping in 16 and
10 points respectively. The team
will look to add a strong recruiting
class this year to replace this
year’s seniors and complement the
team’s returning players. 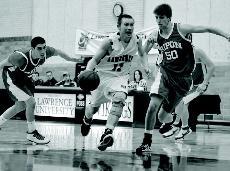