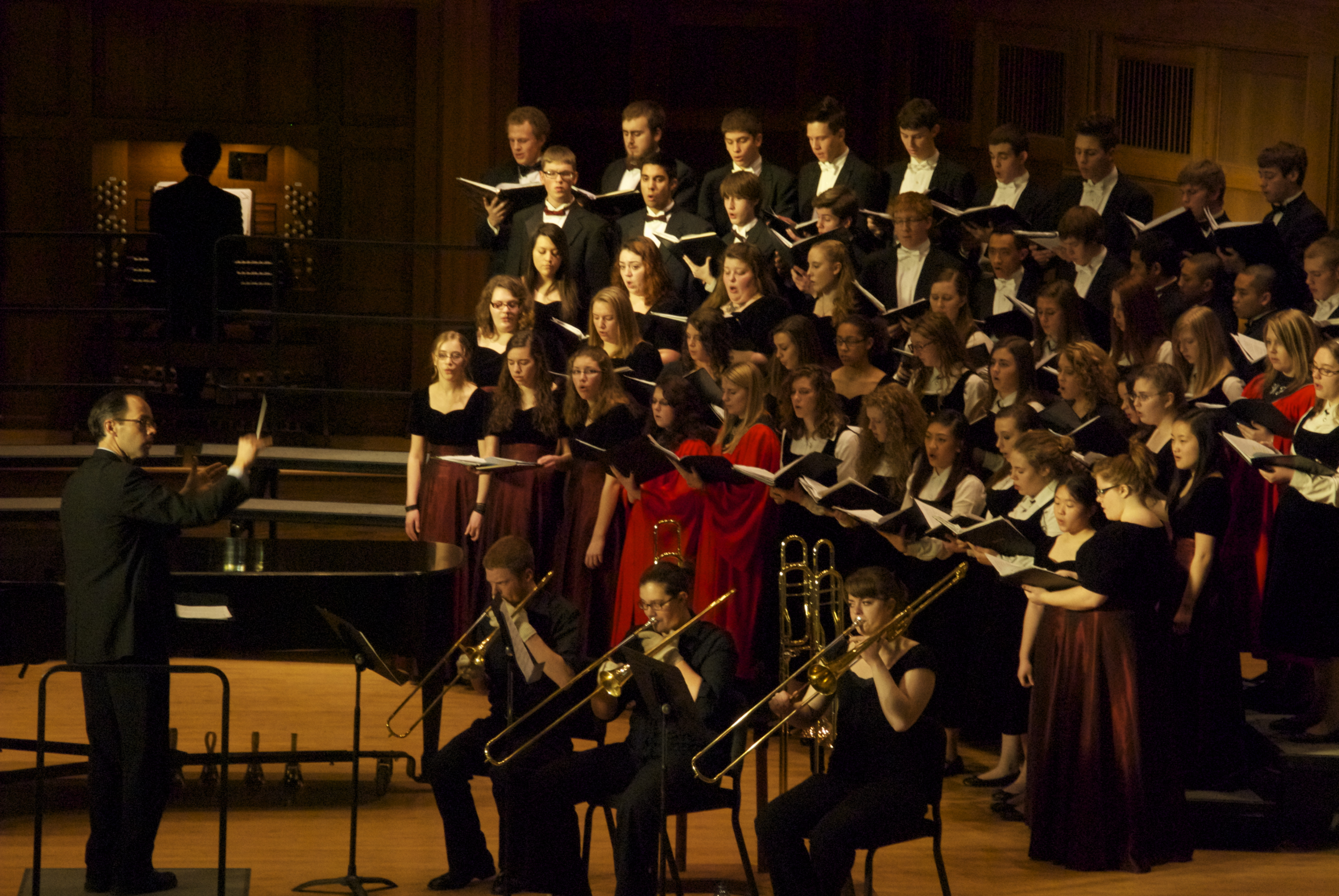 On Friday, Feb. 24, the Lawrence University choirs graced the Memorial Chapel stage with a three-part concert under the direction of Co-Directors of Choral Studies Associate Professor of Music Philip A. Swan and Assistant Professor of Music Stephen M. Sieck. An uplifting affair, the performance was colored by Cantala, Viking Chorale and Concert Choir’s unique ensemble styles as the concert traversed a realm of rhythmically dense, emotionally transformative and at times downright funky music.

The night began with Cantala bursting out of the gates with Libby Larsen’s “The Womanly Song of God.” An exercise in rhythmic precision, Larson’s piece married language-less chanting with sweeping melodies to create a lively tableau of joy. Originally commissioned by the San Francisco Girls Chorus, the piece was written to “celebrate the boundaries of young women’s voices” and was a definite highlight of Cantala’s performance.

With celebration on the mind, Cantala welcomed one of its own back to the stage, as Paris Brown ‘08 assisted the ensemble on the world premeire Sydney Guillaume’s “Chapo pou famm” (Hats off to women) as a soprano soloist. With Louis Marie Celestin’s text rendering lines such as “We will fight until the end/ To spread around justice, To bring a change to all countries,” Cantala’s performance continued to embrace women’s triumphs as Brown’s fruitful pipes accentuated such an ideal.

Next on the stage was Viking Chorale who opened with the holy incantations of Anton Bruckner’s “Locus Iste.” Known for his “Cathedrals of Sound,” Bruckner’s piece proved to be a rich, full-bodied dedication to houses of God, as Viking Chorale’s powerfully large ensemble marked a dynamic shift in the program.

Paring things down for a bit, Viking Chorale’s Schola Cantorum additionally performed Jules Massenet’s “En fermant les yeux” from his opera “Manon.” Comprised mainly of baritones, the Schola performed Massenet’s aria, which was written for a tenor, a few steps lower than the original. Singing in unison, the piece’s static intensity highlighted some of the many excellent voices within Lawrence’s largest choir.

To conclude, Viking Chorale strutted their vocal stuff on the soulful “Walk in Jerusalem” arranged by Paul Rardin. Anchored by the rhythm section of sophomores Joram and Kelson Zbichorski and soloist Christian Clark, the piece’s hymn grooves allowed the ensemble to belt out and gain some serious applause from the packed chapel crowd.

Another highlight from Concert Choir’s performance was senior Alex Johnson’s “Amore Aeger,” a selection that coupled the choir — which Johnson is a part of — with a string quartet. With a burgeoning, hallowing presence, Concert Choir did Johnson proud, displaying a tastefully blended palette of vocal and string swells, topped off by soloists Katy Harth and Tyler Kundinger.

Concert Choir finished the night off with the last hallelujah of Adolphus Hailstork’s “The Lord is My Shepherd.” A boisterous selection channeling religious cries, Lawrence’s prime vocal ensemble finished out the energizing night of choral singing on a high note with soloist Gabriella Guilfoil leading the way.