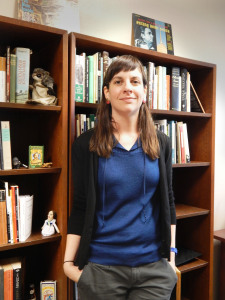 Professor Range was born in Elizabethon, Tenn. yet she has not lived there for 20 years. Her favorite thing about her birthplace is the Appalachian Mountains. “You get used to having mountains around even when you move to a flatter place like [Appleton],” Range said.

As for her love of animals, Range does not have any pets but she owns a stuffed animal in her office: “I do have a stuffed chicken for my door stop. Anyone can come visit me and see the stuffed chicken at any time here in my office,” she said.

As an English professor, Range finds it hard to choose a favorite writer and a favorite book, although she has it clear about her favorite poets, which are Emily Dickinson and Gerard Manley Hopkins.

Range tells us about her undergraduate experience at the University of Tennessee, which according to her was: “exciting … because there were so many people to meet.” Moreover, she remembers it to be really entertaining: “It was just like every term you just met new people and I really liked that… I did think it was fun to each term meet a bunch of new people to hang out with.”

Born in Milwaukee, Lhost first moved to Appleton at the very end of June. Part of the reason why he likes Lawrence is because of its closeness to the Fox River, which makes him think of home, Lake Michigan. “I really like being near bodies of water, which is something that I like about Lawrence. Being here on the river is a great feature of campus,” Lhost said.

Although the Lawrence Vikings’ official color is blue, Lhost admits that his favorite one is “deep royal purple.”

Lhost’s love for economics and technology puts him in an easy spot if he has to choose between Apple and Windows products: “I’m definitely a PC person…I like to be able to play around with it myself and you can do that a lot more with PCs.” Consequently, Lhost considers that Bill Gates is a better entrepreneur than Steve Jobs.

Going back to Lhost’s college days as an undergraduate student, he misses being surrounded by smart and intellectual people, both students and professors, who were passionate about something. “That’s a big reason why I wanted to return to a residential liberal arts college environment,” Lhost said.

Originally from Bethlehem, Pa., Ongiri first arrived to campus in July to become the first director of Lawrence University’s Film Studies interdisciniplinary area. “We are moving towards creating a minor and then a major,” she said. Although currently students can self-design their Film Studies major, Ongiri thinks that in a couple of years it will be a part of Lawrence’s academic offers to new incoming students.

Ongiri shares her love for the local foods in her hometown, which she describes as “a weird mix… about 35% Puerto Rican and [the food] has a long heritage as Pennsylvanian Dutch, which are actually German people.” Moreover, she calls upon everybody to visit her favorite restaurant called “Stahley” when visiting Bethlehem.

As the new Director of Film Studies, Ongiri has a hard time finding her favorite color since she thinks there is something beautiful about the entire color scheme, “I like the way colors work together to create a visual impression, so I couldn’t isolate a favorite color,” Ongiri said. Ongiri is the owner of two pets, a cat, named “Miss Priscilla Cat” and a tortoise, named “Tortie Taco.”

Ongiri seems very thoughtful when trying to choose her favorite movie because “that’s a hard question for people who love film as I do because it’s like a parent asking to pick their favorite child,” she explained. “If I could only watch one movie it would be a martial arts one from Thailand called ‘Beautiful Boxer,’” she pointed out.

As an undergraduate student, Ongiri really liked the comradery developed with other students and the “feeling of learning together.”

Proctor was born in New Delhi, India and first arrived to Lawrence in the summer of 2010 as to fill a one-year replacement position for Assistant Professor of Anthropology Carla Daughtry. As an international anthropologist in the U.S., Proctor tells us what she loves the most about her hometown:

“The markets…you don’t see markets like that in the U.S…Everything is colorful out there and is in the streets. There’s a lot of interaction. I miss the local markets because you get things that you don’t see anywhere else.”

She likes to buy plastics and is fascinated with the market’s colorfulness. Inquiring about what her favorite color is, Proctor said: “I like bright colors. I don’t know that I have a favorite color… More like Indian bright colors: red, orange, green, those kinds of things.”

Although a fan of Indian markets, she also loves animals: “I have a cat and also like dogs … [I’m] not a fan of rodents,” Proctor explained.

As an anthropologist, Proctor shares her fascination with the Indus Valley Civilization, “It’s something I grew up reading about and it’s part of our [Indian] history … something we learned in school,” she said.

Proctor obtained her B.A. in Sociology, which in her country is a lot like social anthropology in the U.S. She misses learning about human social life, a pursuit she enjoyed while getting her undergraduate degree.