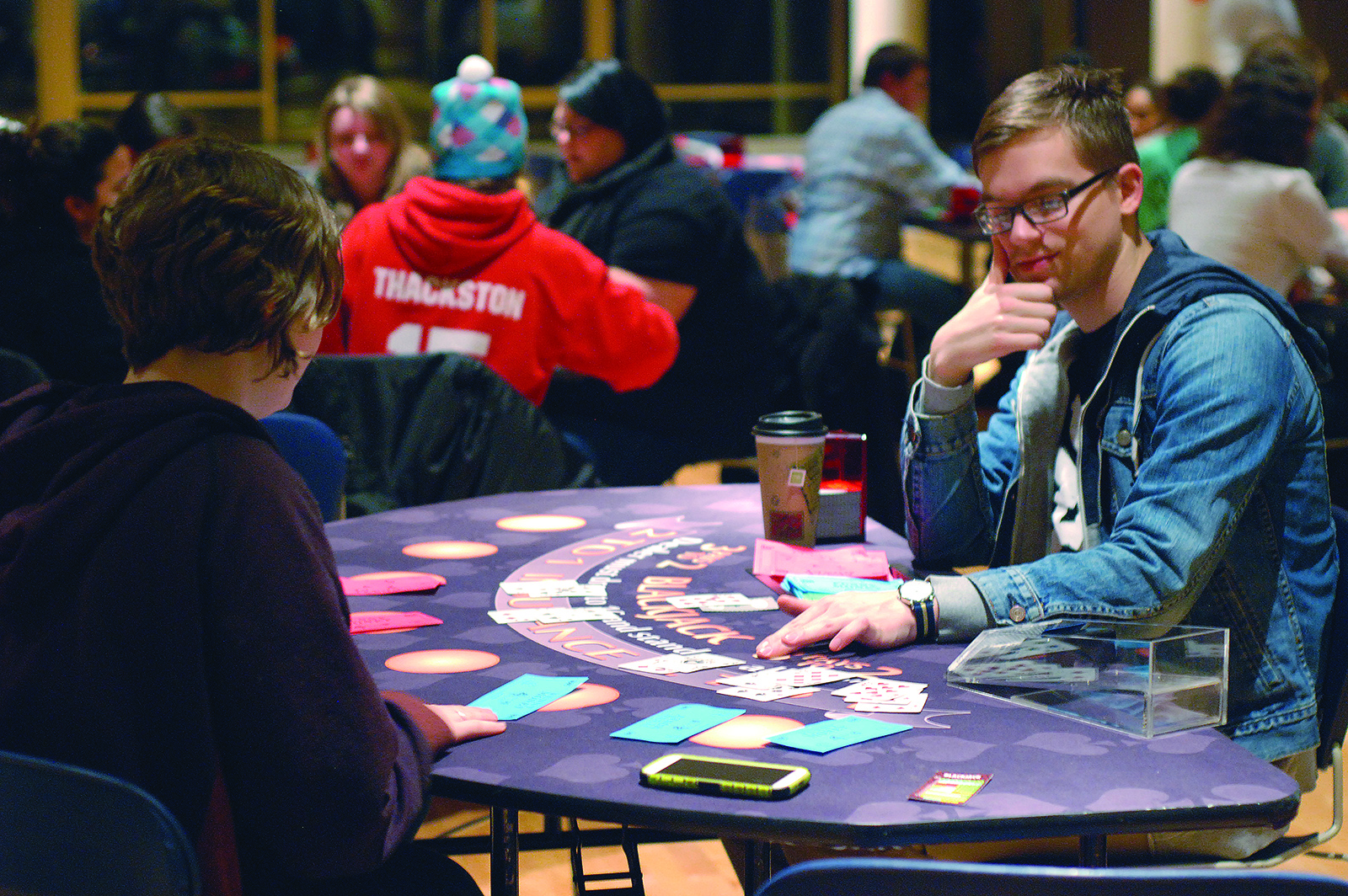 On the evening of Saturday, Jan. 23, Lawrence University Campus Life hosted the first ever Casino Night. Many students attended the four-hour long event in the Esch Hurvis rooms of the Warch Campus Center, playing traditional casino games such as blackjack to Texas Hold’em.

Colman/Brokaw Hall Director and Campus Life Events Coordinator Lindsay Borkin took the lead in organizing the event. She described it as “a casino night with fun games, a sort of Vegas-style casino party.” Students could visit a number of tables and try their hand at gambling with pretend money, known as “Funny Money,” or hang back and munch on Bon Appétit-catered snacks.

Students’ Funny Money winnings were not just for fun, though: they offered a chance to win big. Throughout the night, organizers raffled off a variety of items that might appeal to a Lawrence audience. The four grand prizes consisted of an Apple watch, an iPad mini, Bose headphones, and a Wii U console.

In addition, students could enter to win smaller prizes, such as tickets to the Fox Cities Performing Arts Center’s “Cinderella,” books by author Gillian Flynn, a ‘90s-themed gift basket or a stress-relief bundle featuring kinetic sand. Students rushed to invest their winnings in lottery tickets, many hoping to win big.

Junior Hugo Espinosa invested most of his winnings in tickets for the Bose headphones and was excited at the prospect. “There’s a chance to actually win something I want,” he said. “I could really use some headphones right now, so the raffle makes things a lot more real and competitive.”

Although this was the first official Casino Night, Campus Life has held a similar Vegas-style event on Mardi Gras in past years. “We eventually realized that attendance wasn’t as high as it should be—it’s a weeknight, during a high-stress time at Lawrence,” Borkin acknowledged.

Campus Life teamed up with other Lawrence staff and faculty, including Director of International Student Services Leah McSorley, Dean of Students Curt Lauderdale ‘01, and Director of the Volunteer and Community Service Programs Kristi Hill. They reformed the idea and eventually decided to hold a weekend activity a bit earlier in the term to allow more students to attend.

Students packed the Esch Hurvis room, excitedly trying out the many different games while professional casino dealers taught them how to play. “The attendance was much higher than we expected, which was a great thing,” expressed Borkin. “Obviously, on the weekends, we compete with parties and there’s so many other things going on on campus, but I was really pleased to see a lot of students, a really diverse group of students, show up and have some fun,” she said.

Attendees seemed happy with the experience as well, frequently exclaiming in surprise or exaggerated anguish as their fortunes changed. “It’s fun,” exclaimed junior Monica Paniagua, “because you really feel like you can win something!”

Several students who had attended the previous Mardi Gras events expressed some confusion over the date change. A fair amount were disappointed at the conspicuous lack of catered cheese curds, but still enjoyed the night. “There’s no cheese curds! That’s what I was looking for,” laughed senior Araceli Mena. “But I still love this game.”