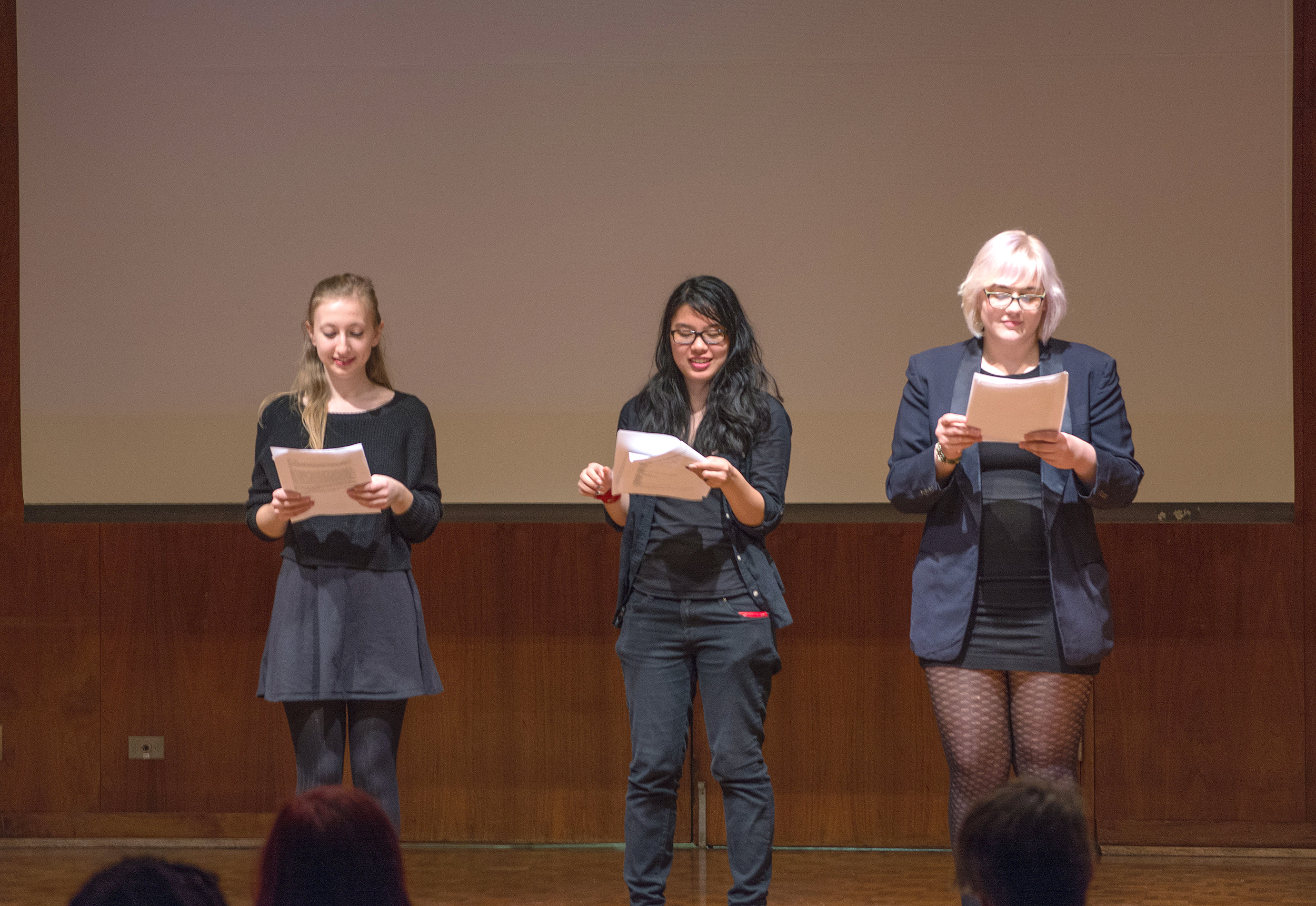 Last Friday evening, Feb. 19, students gathered in Harper Hall for the Downer Feminist Council’s (DFC) annual production of “The Vagina Monologues.” Originally written by Eve Ensler and first performed in 1996, this episodic play has been reenacted and presented at many different college campuses in the United States.

The first piece titled “Worried” began by confessing to the audience that almost every woman is worried about her vagina. Like the Bermuda Triangle, the vagina is a black hole with “darkness and secrecy” surrounding it. In the monologues, over 200 women were interviewed, older women, younger women, married women, single women, lesbians, college professors, actors, sex workers and women of all ethnicities and backgrounds. At first women were reluctant to talk about their vaginas because they were shy. The word vagina is a “totally ridiculous, completely unsexy word.” However, once the women started talking, they could not stop. Women secretly love to talk about their vaginas. The main reason being that no one had ever asked them about it before. A list of common, even derogatory names for vagina were named. The nicknames ranging from words like “poochi, toadie, coochi” to “monkey box” brought laughter to the room and lessened any tension or initial discomfort from audience members.

In another piece, the question, “If your vagina got dressed what would it wear?” was asked. From answers such as a leopard hat to emeralds to a taffeta ball gown, another list of comical and absurd clothing options was presented. This followed with what the vagina would say if it could speak. “Is that you?” to a sexual “Oh yeah” and “Enter at your own risk” brought more laughter to the audience. The cast’s ease in talking about vaginas and not being afraid to read in a sensual tone gave the performance a relaxed and comfortable vibe. The confidence of the speakers was empowering and helped audience members relate to some of the experiences and thoughts that were shared in the monologues.

Many of the monologues focused on the vagina as a foreign and unknown part of the body. However, throughout the telling of different stories, women began to realize their unique beauty and were able to come to terms with their bodies. In “The Flood,” a 72-year-old woman was interviewed and told her story of never having an orgasm. She described her vagina as a cellar, “A place you don’t go. It’s closed up, under the house. It’s down there.” In another piece, “The Vagina Workshop” a woman tells her story of her vagina being an “anatomical vacuum,” a practical and solely biological form. However, upon realizing that everyone has their own “unique beautiful, fabulous vagina” and being able to see it up close for the first time, she was able to appreciate herself and be empowered. This monologue ended with an enlightened message to all women. “My vagina is a shell, a tulip, and a destiny. I am arriving as I am beginning to leave. My vagina, my vagina, me.”

Shifting to a more serious topic, stories of rape and female genital mutilation were shared. The monologue “My Vagina Was My Village” was told from the point of view of a rape survivor. The story was to represent 20,000 to 25,000 women and girls who were raped during wartime in Bosnia. To women, rape is another kind of war. The narration caused some movement in the audience because of the graphic details, horrific imagery and strong language. The monologue compared her vagina to her hometown; a river of poison where everything had been invaded and died—somewhere she did not want to touch or visit.

One of the last pieces shared was titled “I Was in the Room” and recounted the birth of Ensler’s granddaughter. Described as a “sacred vessel the vagina, like an operatic mouth” sang with all of its strength to bring a new being in the world. The monologue shared this special moment of awe and reverence.

Though all of the monologues held different meanings and shared unique perspectives into individual women’s lives, the performance as a whole was empowering and awe-inspiring. In our society today vaginas are objectified and viewed as a pejorative part of the woman. However, in sharing these stories of women from all backgrounds, “The Vagina Monologues” is able to break these stereotypes and bring awareness to the challenges in loving the human body and understanding its beauty and value.

Last Friday evening, Feb. 19, students gathered in Harper Hall for the Downer Feminist Council’s (DFC) annual production of “The Vagina Monologues.” Originally written by Eve Ensler and first performed in 1996, this episodic play has been reenacted and presented at many different college campuses in the United States. The show opened with a general…