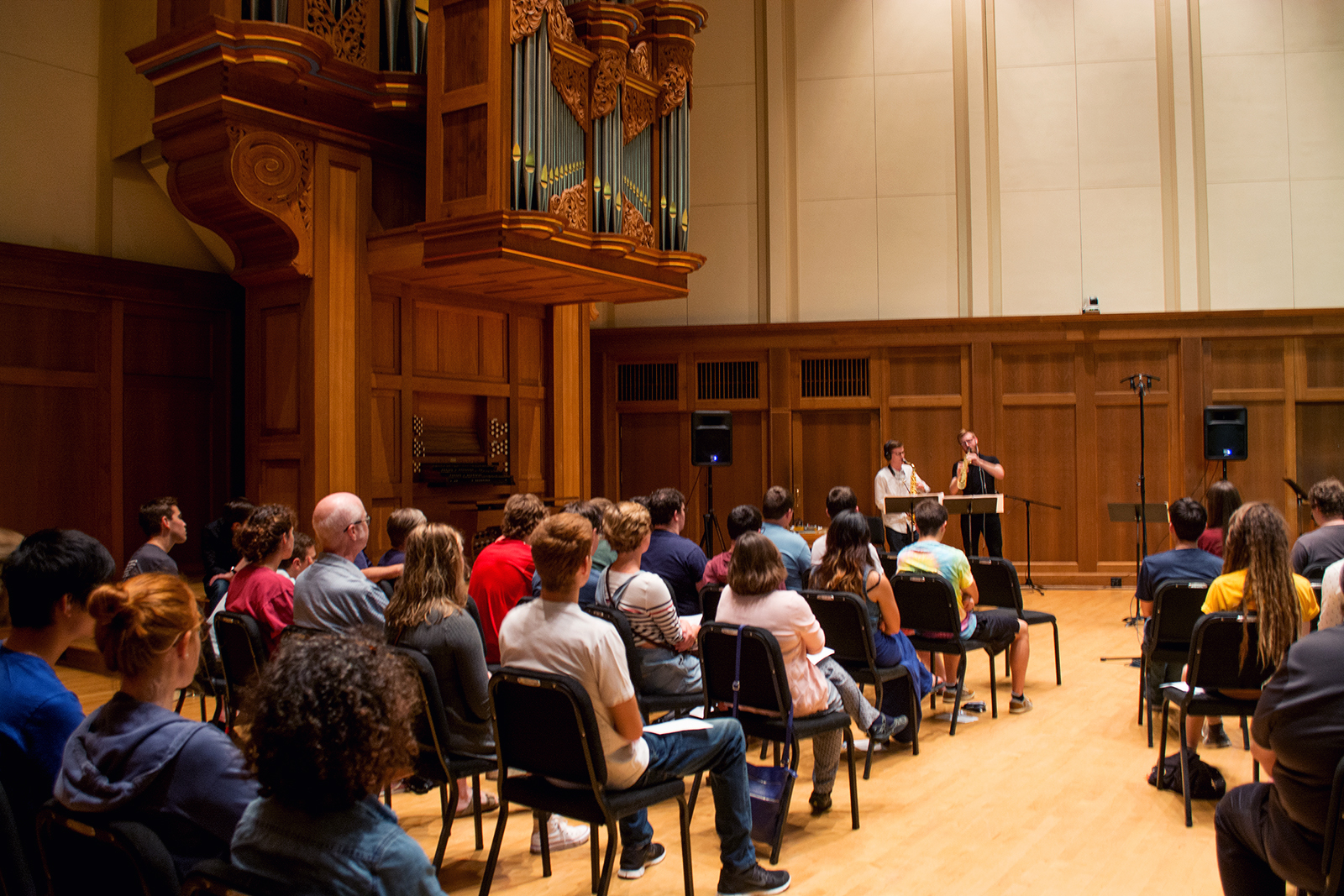 This past Saturday, Sept. 17, faculty, staff and students gathered in the Lawrence Memorial Chapel for the first faculty recital of the term. Chairs were set up on the stage, inviting the audience to engage with the music as well as participate in the program. Soprano saxophonist, Chicagoan soloist, chamber musician and Instructor of Music Sumner Truax started out the program with Fuminori Tanada’s “Mysterious Morning III.” Constructed of both atonal and flurrying notes, the piece resonated an unsettling though intriguing sound throughout the chapel.

Associate Professor of Music Asha Srinivasan introduced the second piece, “Keerthanata,” which she composed in 2012. Srinivasan described “Keerthanata” as an exploratory piece of Indian music form. Inspired by the “keerthan” form in her composition, Srinivasan’s piece guides the listener in hearing different parts of the work and a distinct melody that gradually adds on variation. She described her pieces as employing different saxophone techniques, and saxophone and ethereal-sounding recordings aided the performance. Truax alongside senior and alto saxophonist Joe Connor performed Srinivasan’s piece, emphasizing the effect of the two different parts complementing each other with the variation in melody. They both wore headphones and played with the recordings, and as the piece went on, the audience could feel the build up and intensity of both the players themselves and the notes they played.

Truax performed solo the next two pieces, “Sequenza VIIb” and “Wicker Park,” which each had a distinct meditative characteristic that complemented but also contrasted one another.

“Sequenza VIIb” was a fantastical piece, which followed the storyline of an obsessive musician who fixated on one pitch they could not perfect. In this part, the audience were asked to participate in the performance by humming a continuous note, which added to the meditative nature of the piece and let the listeners become part of the composition. The humming acted as a drone and added an “offstage” presence that worked with the description of the piece’s subject.

“Sequenza VIIb” then silently ended, and Truax moved right into the next piece, “Wicker Park.” This piece by contemporary classical music composer Marcos Balter had a different interpretation compared to “Sequenza VIIb”, holding a quieter but still meditative sense and also employing a soundscape quality. Some of the parts were almost inaudible and the notes were indistinguishable except for the breath of air on the saxophone. At the same time, the piece was whimsical and ethereal and nicely arranged next to the earlier pieces.

To conclude the recital, Iannis Xenakis’ piece “Dmaathen” was performed by Truax and Drumming Ensemble instructor Dan Reifsteck ‘15. Audience members were advised to wear earplugs, as the piece would be introducing a range of different pitches and sounds. Even to the musicians performing the piece, it was unclear exactly how one went about describing Xenakis’ work. There were two distinct sections of the piece—the first described like a folk dance while the second took on more of a circus-like march with carnival sounds. Both Truax and Reifsteck faced each other throughout the performance, and the audience could tell that they were in tune with each other and their music, making sure their parts were played in junction. The drumming of the percussion led to another drone-like atmosphere, and the saxophone’s varying pitches and tones gave a strong likeness to the earlier pieces’ atonal and sometimes unsettling nature. The second part of the piece changed drastically from the first, giving a light carnival-march feel, which could easily be imagined as a carousal ride.

Overall the audience greatly enjoyed the performance as the final number received a roaring applause. Though each piece was different, the different techniques and use of the Chapel space gave the audience a different approach to the music, allowing them to be up close with the performers and to become a part of the various works. The unique set up onstage also gave the listeners a better understanding of how the music was composed and added more mystical realism to the unique pieces.