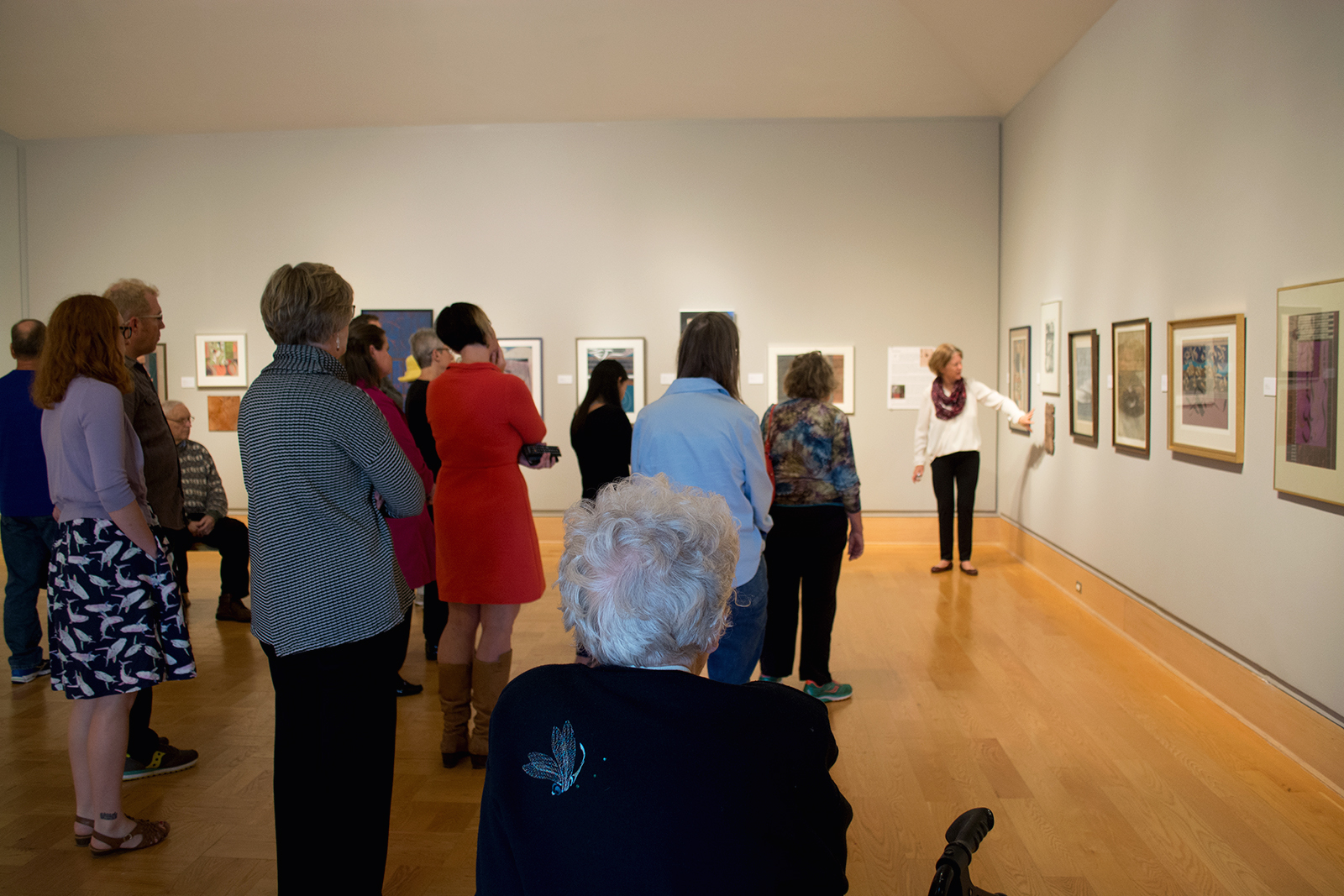 On Thursday, September 29, the Wriston Art Galleries hosted its first Art @ Noon exhibition of the 2016-2017 academic year in the Kohler Gallery. In this 20-minute lunchtime tour, the galleries welcomed Curator of Exhibitions at the Cedarburg Art Museum Mary Chemotti ’70 to present the exhibition “Arthur Thrall: Tribute to a Master Artist.”

The collection of artwork of the late Milwaukee painter and printmaker demonstrated the use of montages of façades, letter form and the combination of handwriting, calligraphy and the aesthetics of line. Chemotti, a past student of Thrall, described the artist’s earliest works in the 1950s as “figurative” and noted that some of his inspiration stemmed from Milwaukee’s urban renewal in 1956 through 1964. Having had the assistance and support of Thrall’s widow, Win, Chemotti was able to present many unique pieces of work in the gallery.

To the small audience, Chemotti guided the viewers to the different collection of prints which conceptualized Thrall’s three main themes and developments in his art: calligraphy, elegant line and musical notation.

Thrall’s fascination in graffiti and growing interest in fine handwriting and calligraphy led him to experiment with layering colors and giving texture to his work. It was not so much the message of the handwriting as it was the shape of lines and patterns that inspired Thrall. Middle Eastern forms and shapes, as well as Islamic and Arabic writing and illuminated manuscripts served as other pieces of influence for the artist’s earlier plates.

Expressive line, Chemotti explained, was developed for Thrall’s own elegant sake and is seen as supremely simple and concise. In these prints Thrall chose intaglio medium, which included an etching process on the surface of the cardboard or plate. The incised areas of the surface carried ink, and followed his experimentation of unique hand coloring and his production of several color renditions of the same original works. His earlier works were made on a large print press, but over the years he turned to a smaller press, so the different editions are smaller to scale.

From calligraphy and elegant line, Thrall introduced musical notation into his work. He was especially interested in German composer Johann Sebastian Bach and the musician’s own calligraphic embossed monogram. As seen in a couple of his works, Thrall has dedicated and paid homage to Bach in these pieces. The viewer is aware of this merging of calligraphy and musical notation techniques. Thrall experimented with a music engraver that allowed him to hammer stamps into the metal surface to create tiny notes and produce the fine and delicate print of musical composition. Thrall’s interest in infused geometrics, scientific notation and symbols found in maps, labyrinths and even hopscotch, formed his own communication device to viewers.

While all three techniques were inspired at separate times of the artist’s life, Chemotti showed the “confluence of [all] three themes” and the different mediums and styles Thrall used in some of his later work. After the tour, the group was encouraged to ask questions and visit the Quirk Print Gallery to see more of Thrall’s work.

Being at a small liberal arts college similar to Lawrence University, Thrall had the opportunity to communicate with different students and colleagues—musicians, biologists, scientists and historians alike—which inspired the different apparent themes in his work coming from different fields and inspiration. Through the use of etched plate on linoleum block, print relief, three-dimensional tetrahedron, gouache and watercolor, oil and acrylic on canvas, pastels, pencil drawing and intaglio mediums, Chemotti’s collection demonstrates a wide variety of experimentation and inspiration for the well-known Milwaukee artist. Kohler Gallery will house the “Arthur Thrall: Tribute to a Master Artist” collection throughout the term until Nov. 23.

Curator of Exhibitions at the Cedarburg Art Museum and Lawrence University alumna Mary Chemotti ‘70 presents the exhibition “Arthur Thrall: Tribute to a Master Artist.” Photo by Veronica Bella On Thursday, September 29, the Wriston Art Galleries hosted its first Art @ Noon exhibition of the 2016-2017 academic year in the Kohler Gallery. In this…