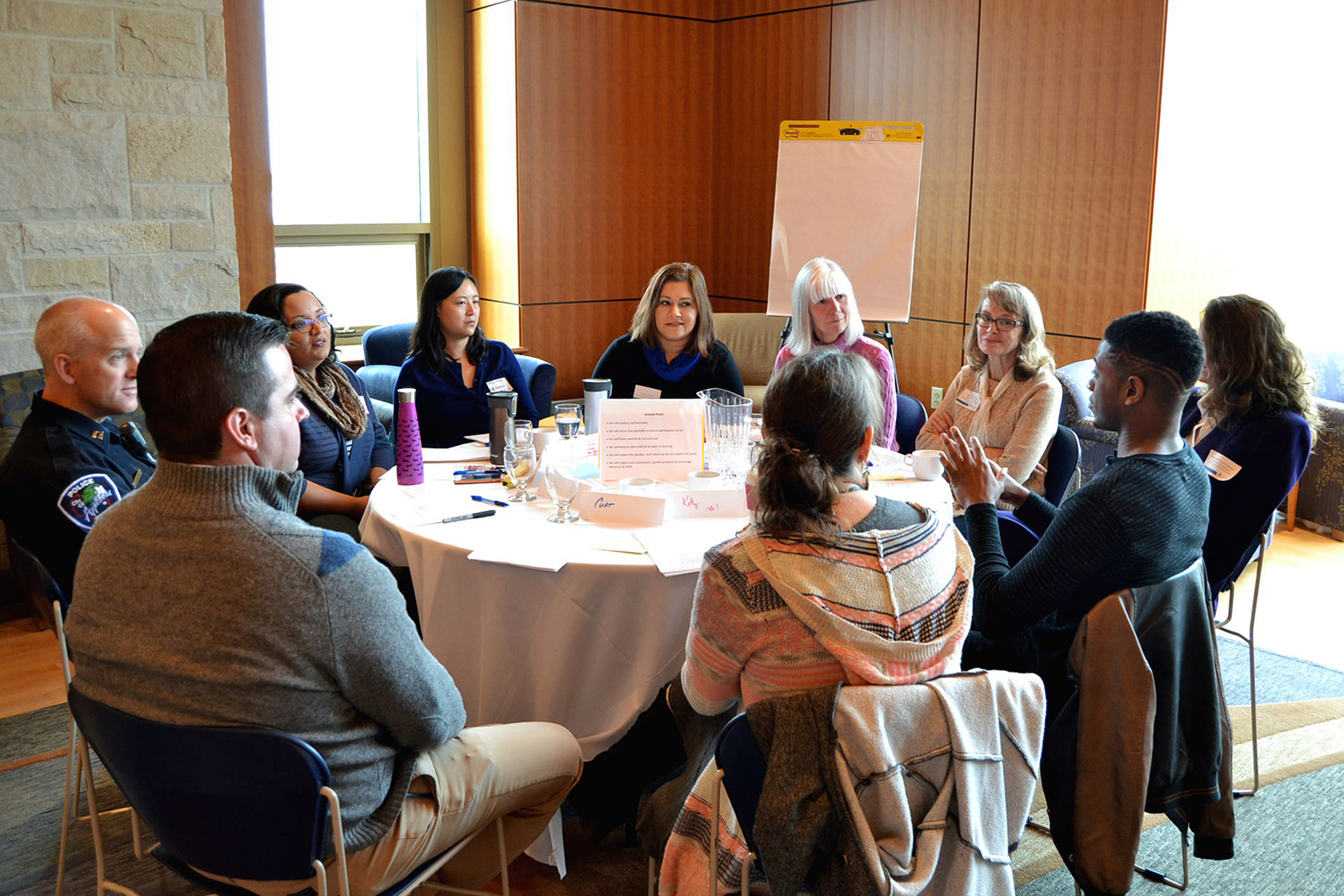 Faculty, staff and students of Lawrence University teamed up with members of the local police force to discuss pressing issues on diversity within the Appleton community.
Photo by Emily Midyette

On Friday, Oct. 21, the Office of Diversity and Inclusion at Lawrence University, along with the Appleton Police Department, hosted the Community Conversation on Safety. The event was the first in a series of discussions planned to promote dialogue between the campus community and the Appleton Police Department on issues regarding safety and inclusion on campus and in the Appleton community. It was open to all members of the community upon advanced registration. Attendees included students, faculty, alumni, community members, Campus Safety personnel and Appleton police. The event was held in the Nathan Marsh Pusey Room of the Warch Campus Center from 8:30 a.m. to noon.

Facilitators for the event were from Celebrate Diversity Fox Cities, a group whose mission includes celebrating diversity and providing education, dialogue and advocacy in the Fox Cities community. The group is composed entirely of volunteers and was created by the merging of the organizations Toward Community: Unity in Diversity and the Fox Cities Rotary Multicultural Center.

Kimberly Barrett, Ph.D., the Vice President for Diversity and Inclusion and Associate Dean of Faculty at Lawrence said, “I was inspired to organize the [Community Conversation on Safety] as a way to ensure that all of our campus community feels safe in Appleton. My decision to put on the event was based on the reports I have heard from faculty, staff and students related to concerns they had and the national climate related to police/community relations.” She continued, “It was also an opportunity for me and the Appleton Police to hear firsthand how people are experiencing the city.”

Chief of Police Todd Thomas of the Appleton Police Department noted, “We have been coming to the campus to have these discussions the last couple years. When Dr. Barrett came to LU she reached out. We discussed the possibility of doing more work in this area and she led organizing this event.”

Upon arrival at the event, participants were placed into small groups of approximately seven people at tables. Light refreshments including tea, coffee, scones and muffins were served. The event began with an introduction by Barrett and Thomas.

Small groups then began a two-part facilitated discussion with a ten-minute break in between parts. The first half of discussion included exercises focused on getting to know group members and their ethnic backgrounds. It also included dialogue on individual experience with police interactions.

The second phase of discussion concentrated on describing levels of comfort and safety for community members both on campus and in the Appleton community. It also included conversation about how individual community members and how police might face challenges related to race relations in the community.

A larger group discussion on summaries of topics brought up in each group followed the small group conversations. The event concluded with a debriefing and call to action by Barrett and Thomas.

Thomas said, “From a police perspective I hope everyone came away with an understanding of how much the Appleton Police Department truly cares about people and how much we fight for justice for all people. I know I learned more about how members of the community feel, both positive and negatively, and wish more people in our community had the opportunity to experience these types of event.”

Rose Wasielewski, Assistant Dean of Students for Campus Life, said, “One of the biggest takeaways for me was getting a renewed understanding that for many, Appleton is not actually safe for them.”

She went on to say, “It is extremely safe for the social norm—white, middle-class, heterosexual, cis-gendered individuals. For those outside that norm, Appleton, and our very campus, can be unwelcoming and unfriendly towards those who exist outside the social norm.”

When asked about topics for continued conversations in the future, Wasielewski noted, “I wanted to have a better understanding of what the Appleton Police Department is doing to not only diversify their team, but also what they are doing to ensure every member of the force has a cultural competency, as well as understands how power, privilege and oppression play a role in protecting and serving our community.”

When asked about pressing issues of safety on Lawrence campus and the city of Appleton, Wasielewski said, “I think the most pressing issues are students feeling as though their fellow Lawrentians aren’t looking out for them and their best interests.”

Of the Appleton community, she said, “There is so much work to be done to help our community embrace empathy towards each other and have civility amongst our differences. I hear stories from many Lawrence community members [students, faculty and staff] who do not feel safe walking down College Avenue.”

Barrett said, “I heard about some issues suggesting the need for more lighting on campus in certain areas.” She also mentioned the “hate speech being yelled from cars on College Avenue.” Barrett noted the possibility of working with the city of Appleton to purchase high-definition surveillance cameras for areas of College Avenue where reports of harassment have been noted.

The event was an opportunity for community members, students, faculty and police to share experiences and thoughts about safety in the community. Wasielewski said, “These events help to create a space for people to share and to hear, to expand their understanding of how our community looks and feels to different people. My hope is that this leads to actionable items that can move the safety of the campus for all forward.”

Thomas also added, “I think the event was a great start with some healthy and courageous conversations. Personal, face-to-face honest conversations are the best way to build trust and unify people. We are all in this together and this was a good, positive step in the right direction, but we all have a lot of work to do and a lot more we can learn from each other.”

Barrett noted, “We don’t all experience our community in the same way,” and hoped that attendees gained “firsthand information about the events that have influenced different people’s perception of safety in Appleton.” She went on to say, “I hope that [the event] also helped to establish greater trust between our campus community and the Appleton police.”

Faculty, staff and students of Lawrence University teamed up with members of the local police force to discuss pressing issues on diversity within the Appleton community. Photo by Emily Midyette On Friday, Oct. 21, the Office of Diversity and Inclusion at Lawrence University, along with the Appleton Police Department, hosted the Community Conversation on Safety.…