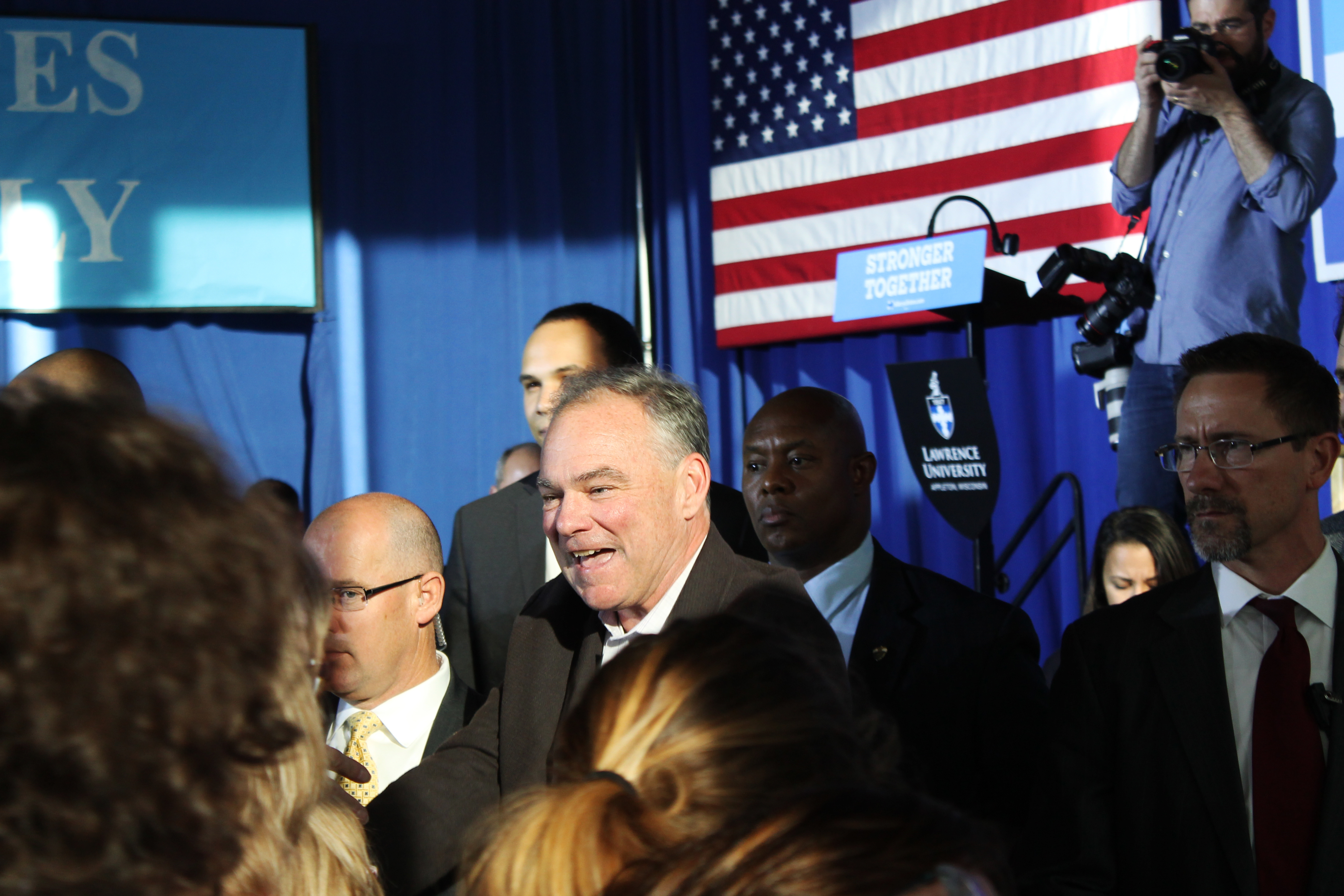 On Tuesday, Nov. 1 at 2 p.m., as Beta Theta Pi shoveled 14 tons of sand into their house in the wake of their annual Beach Bash, hundreds of students and citizens of the Fox Valley gathered in the Somerset Room of Warch Campus Center to hear speeches by Democratic nominees Russ Feingold and Senator Tim Kaine.

Senator Tammy Baldwin’s introduction focused on the importance of early voting, saying she voted early that morning for Secretary of State and Democratic nominee Hillary Clinton and Kaine, as well as Feingold for the Senate. She praised Clinton for her work on the Children’s Health Insurance Program (CHIP) as well as her dedication to improving the conditions of student debt through refinancing and debt forgiveness. She described Kaine as “focused like a laser on how to help Americans get ahead and realize the American dream.”

As the Nov. 5 early voting deadline rapidly approaches, Kaine and Feingold are traveling across Wisconsin to promote early voting. Feingold explains the importance of early voting by saying simply, “We can stop thinking about you.” Feingold also catered to the large proportion of Lawrence students in the room and enthusiastically discussed his connections to Lawrence. He holds an honorary degree, has close connections to alumni and has guest-taught classes for a foreign policy course.

Much of Kaine’s speech was in support of his running mate. “I’m am so proud to be a strong man supporting the first strong woman to be nominated by a major party to be president of this country.” He said, “Hillary doesn’t like to brag about herself, but I’ll brag about her.” He praised Clinton’s credentials and support of children and family throughout her career despite various hardships along the way.

Kaine also criticized Republican candidate, Donald Trump, making comparisons of character. He said he would rather see “a strong woman in the office” instead of “a man who offends women every time he opens his mouth.”

Junior Julian Cohen, like many students, has already voted via absentee ballot in his home state of Virginia. “I’m really proud that I’m from Virginia. He said a lot of things I agree with.” He said, “I feel like everyone I’ve talked to is really involved in this election and has voted or will vote.”

Elizabeth Bridgewater, a freshman, also voted early via a Colorado absentee ballot. She felt that it was important to her to vote in her home state, but also feels voting early will allow her to volunteer more in the last week of campaigning. “It was interesting to hear Senator Kaine talk and get to know him as a person and compare his public speaking to Hillary Clinton’s,” she said.