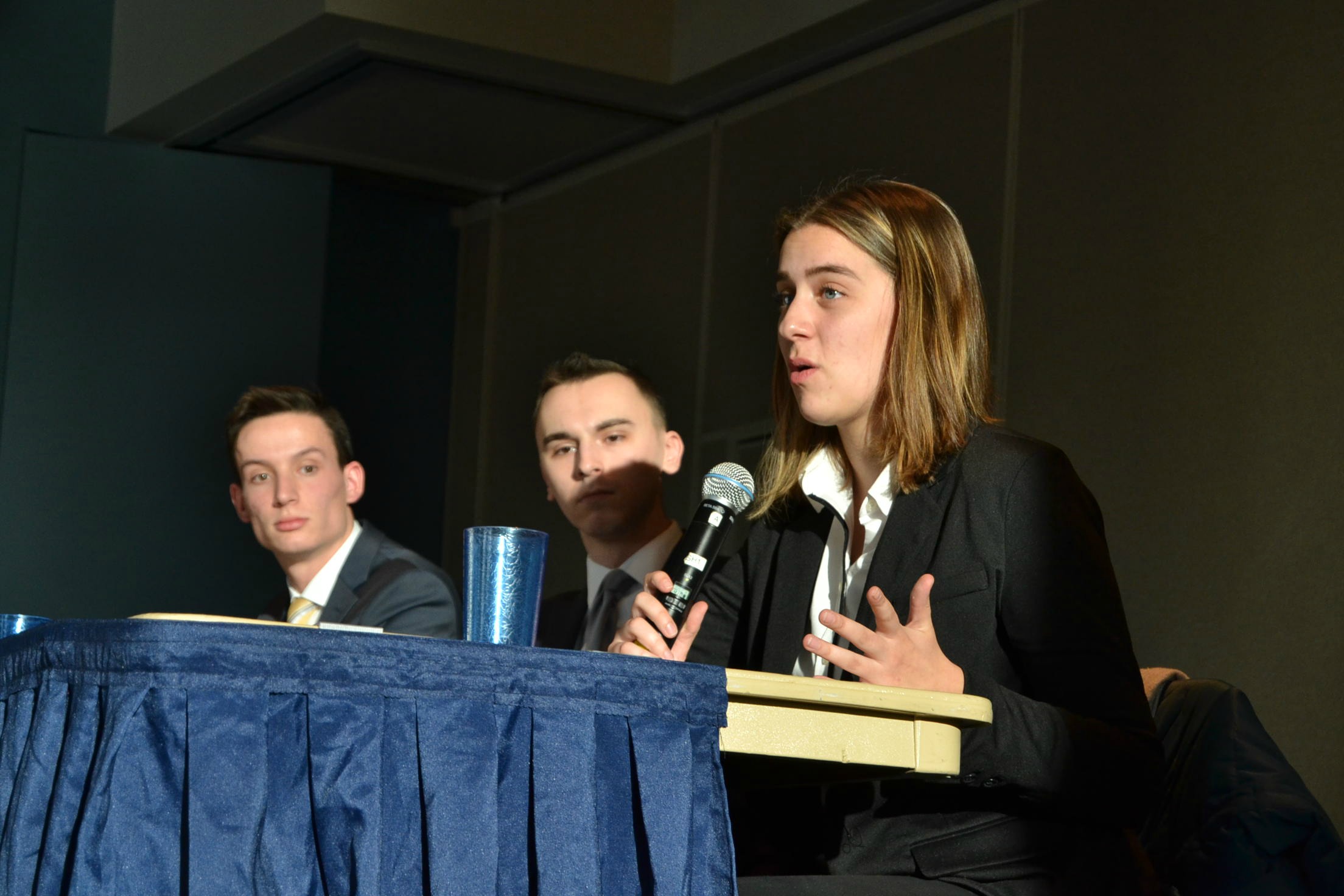 Shortly after 3 p.m. on Saturday, Jan. 14, candidates for President and Vice President of LUCC met in a room full of their peers to discuss issues pertinent to the positions they wish to fulfill.

Juniors Lewis Berger and Dan Thomas-Commins are opponents in the presidential race.

Berger studies economics and government. He plays on the men’s soccer team, is the co-chair of the LUCC Athletic and Conservatory Engagement Committee, is the student representative for the Class of 2018 as well as on the development committee both for the LUAA Board of Directors, is a MARS member, has helped be a CODA facilitator, and is the Fair Housing and Homelessness Program Coordinator at the volunteer center.

Thomas-Commins is a government major, is the Vice President of GLOW, is the chair of the LUCC Residence Life Committee, and is a member of the Student Welfare Committee as well as CODA. He is also involved in MARS and SAASHA.

Junior Naomi Oster is running for Vice President of LUCC. She is pursuing a mathematics major, gender studies minor and is in the Teacher Certification Program. She is the vice-chair of SAASHA, is a student representative on SHARE, is a MARS member, goes to CODA meetings and is a manager at the Warch Campus Center.

All three candidates wish to use their desired positions to elevate marginalized voices on campus, mostly through open conversation.

These three also have examples of working with both administration and the student body to make change happen. Berger helped to fundraise for the recent Diversity Center improvements, Thomas-Commins pushed Gender Neutral Housing changes and Oster has worked in her position on SHARE to revise the Sexual Misconduct Policy.

Perhaps the question with the most impact came last in Lilly asking, “What are five words that describe your mission?”

Oster answered, “Pushing Lawrence past our limit.” She went on to say that the administration at Lawrence is willing to work with and be pushed by students on pressing issues.

“Give voice to every student,” was Berger’s answer. He hopes to encourage change by including all members of the Lawrence community in meaningful conversation.

Thomas-Commins ended with the words, “Inclusion, consensus, dedication, meaningful change.” He wants to similarly make sure that every opinion on campus is heard and validated.

After questions from the moderator, junior Leif Olsen and freshman Eileen Bauer came forth with their own questions on raising dissenting opinions and mental health, respectively.

Candidates reiterated that dialogue and consensus were crucial to making a better campus where everyone’s voice is heard. They all also agreed that Lawrence should be better educated about the mental health resources available. Oster stated that “mental health is the biggest issue on campus” and is determined to make a change in that area. Berger agreed that resources are available, the right people need to be brought together to tweak the problems. Thomas-Commins suggested a counseling representative be added to the Student Welfare Committee to facilitate the coordination and improvement.

Reflecting on the debate, Berger and Oster are optimistic no matter which way the election turns out.

“All I have to say is that I am excited to work with either of them,” Oster commented.

“I was very happy with how positive the debate was. I was really encouraged,” Berger added. “I think, regardless of the outcome, all three of us are willing to work together.”

Thomas-Commins also had a positive experience.

Shortly after 3 p.m. on Saturday, Jan. 14, candidates for President and Vice President of LUCC met in a room full of their peers to discuss issues pertinent to the positions they wish to fulfill. Juniors Lewis Berger and Dan Thomas-Commins are opponents in the presidential race. Berger studies economics and government. He plays on…