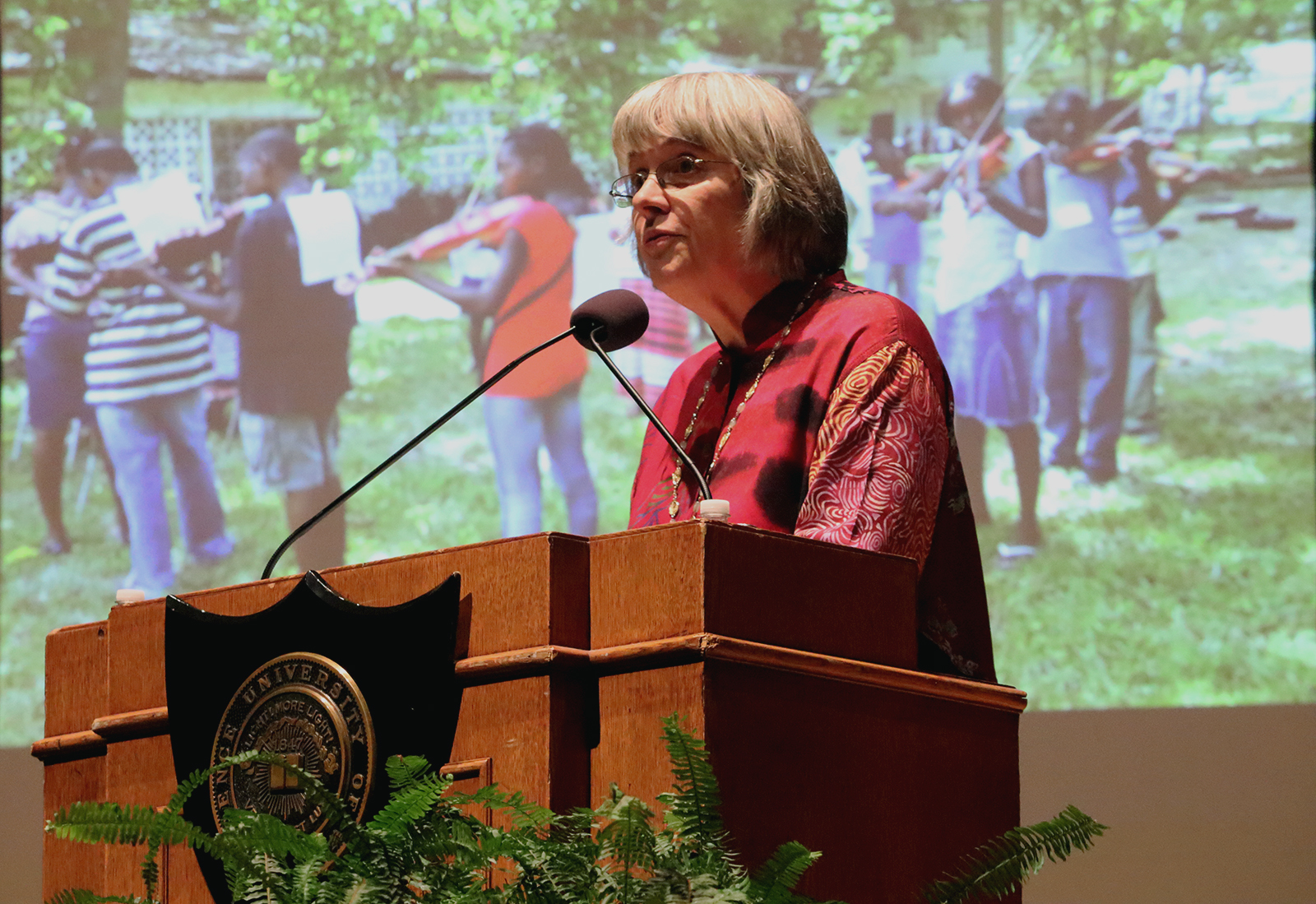 Anthony accompanied her talk with photos from her work abroad.
Photo by Luke Payne

On Friday, Jan. 6, Janet Anthony, Professor of Music and George and Marjorie Olsen Professor of Music and Teacher of Cello, presented “Adventures in Music Making: 20 Years of Cross-Cultural Exchange in Haiti,” at 7 p.m. in the Lawrence Memorial Chapel. This convocation featured performances of Haitian music, performed by the Lawrence University Cello Ensemble and the Lawrence Symphony Chamber Orchestra, and composed by students at Lawrence, as well as speakers senior Irene Durbak, alumna Carolyn Desrosiers ’10, Assistant Professor of Music and Director of Jazz Studies José Encarnación and journalist Friz Valescot. The convocation honored both Professor Anthony’s work in Haiti and promoted the nonprofit Building Leaders Using Music Education (BLUME) Haiti.

In describing her experience in working in Haiti, Professor Anthony said that she originally became involved in Haitian music life when reading the ads in Strings Magazine, which asked for a cellist performer in a music in Port au Prince, Haiti. Upon her arrival she said that “the wonderful people of this country immediately got under my skin,” and she was stunned at the “hunger to learn” that the students exhibited and the warm reception musicians received. “Music of one kind or another was the background of daily life,” Anthony said.

Durbak spoke of the effect that working in Haiti has had on her own education and life. Durbak taught band, percussion ensemble and orchestra in Haiti, and said that the experience made her a “better human and teacher,” and that she “learned more about kindness and personal confidence,” than she had previously learned in her life.

In concordance with Professor Anthony’s comments, Durbak said that the “passion in students pushed me to do my personal best,” and that she was inspired by the energy her students had for music. Durbak was impressed at the ways in which music could convey so much, despite the communication barriers between Creole and English.

Professor Encarnación echoed Durbak’s remarks, saying “the arts are the universal language, and it is our duty to support that.”

A common theme amongst the speakers was the poverty in Haiti. After 2010’s devastating earthquake, support from the Lawrence community led to a televised concert organized by local community leader Carolyn Desrosiers, as well as exchanges between the Holy Trinity Music School and Lawrence Conservatory, where the composers heard onstage attended.

Professor Encarnación said that the work there was “intense, but extremely refreshing. There was so much that they wanted to learn.” He went on to discuss how deeply the desire to learn allowed them to work around the conditions of the music school: one computer, few desks and instruments in need of repair.

However, in spite of these setbacks, Encarnación was surprised by the students’ kindness, generosity and desire to learn. “Talent shone right through the setbacks,” he said, and was reminded of “how lucky we are to have all that we need to learn here at Lawrence.”

Junior, cellist and performer Mikaela Marget was impressed by the speakers and the music played. “It was such a wonderful experience to play music from a part of the world that, ordinarily, I would not have been able to perform, or even [been] exposed to.” She also said that she was moved in honoring her teacher, who she will miss greatly.