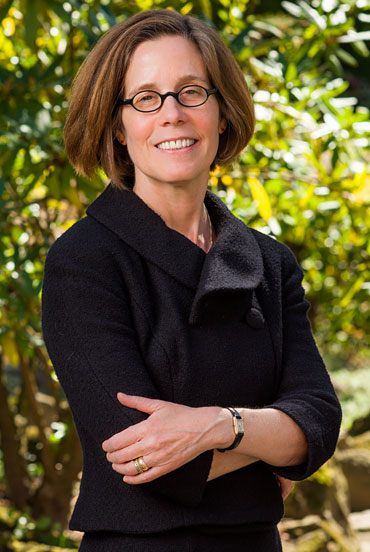 Photo courtesy of the Office of Communications

As Lawrentians celebrated the holidays over winter break, President Mark Burstein announced the selection of our future provost and dean of the faculty, Catherine Gunther Kodat. The selection committee was drawn to Kodat’s experience, temperament and love of the liberal arts. They believe these qualities make Kodat a worthy replacement of current Provost and Dean of the Faculty David Burrows, who announced his retirement from the position last spring.

Kodat has enjoyed a long career within the sphere of liberal arts institutions as a professor, program director and administrator. After serving as a professor of English and creative writing and as department chair during her 17 years at Hamilton College, Kodat began serving as dean of the division of liberal arts at the University of the Arts in Philadelphia in 2012. She is currently dean of the college of arts and sciences at Lewis & Clark College in Portland, Ore.

The following is an interview with Kodat in regard to her new position as provost.

The interactions of students with the provost often come at times when they are struggling academically. What were your greatest struggles as a student and how does that impact your interactions with students?

I have very vivid memories of very real struggles when I was an undergraduate. I actually started out in a conservatory; I was a piano performance major at what was then called the Peabody Conservatory of Music. I was very excited to go, but I was coming from Troy, New York, and I was the only musical person in my family. I was kind of the anomaly. I had no sight-singing training; I had no theory training. I had just played piano all those years. So when I got to the conservatory I found that classes with students whose parents were orchestra musicians, who had grown up surrounded by music, who had perfect pitch, who knew already how to sight-read. I was very intimidated and, frankly, sort of crashed after my freshman year and ended up taking a year off between my freshman and sophomore year. That was partly for financial reasons, but I also needed to take time off to get my head together. I had around a 2.0 average, I had problems with time management, [and] I had problems figuring out when to practice. I came back for my sophomore year, but then it became clear to me that this kind of very high intens[ity], focused musician life that the conservatory-trained people were for was really not the life for me. So it was a process of discovery for myself, figuring out exactly what I wanted to do. I’ve told this story to students before and their eyes bug out of their heads because it’s not a story of great success. The larger point of the story, I think, is that you kind of struggle and you learn from your struggle, you move forward, and you don’t give up. This is one of my stories that I know informs my conversations when I meet with students.

As our future chief academic officer, are there changes you would like to see in how we’re currently doing things?

I really need to be at Lawrence for a while before I have any sense of what needs to be changed. When I was meeting with the search committee and talking with President Burstein, Provost Burrows and also Dean Pertl of the Conservatory, I got a sense of ideas people have of things that we can sort of think about together. A great interest, for instance, is in building an inclusive community across all spectra of the university, faculty, staff, students, everybody that I spoke to. That was a major commitment and that’s a major commitment for me, too.

So they’re fighting [for Lawrence] to be a place where everyone is working together on that issue, and they see it, correctly, as a long-term commitment for the college. Then generally on the academic side I sense that there is a lot of excitement for interdisciplinary work, and people are wanting to think about ways in which aspects of majors can be combined. There’s a lot of excitement about continuing to explore ways in which the Conservatory and liberal arts college can partner together. Those are the kinds of things I’ll have conversations with people about and hear folks’ ideas and see what kind of things bubble to the surface.

As far as increasing diversity and inclusion on campus, have you had experiences at other colleges that give you insights into those things?

Yes! Last year at Lewis & Clark, as what was the case at many campuses and I think a little bit also at Lawrence, there was a lot of student activism. There were some campus protests and a lot of discussion about a lot of issues having to do with diversity and inclusion on campus. Some of it was a little more student life issues and then some of them more academic issues. The academic issues that I was, and still am, working on with students and faculty at Lewis & Clark center around hiring faculty, trying to make for a more diverse faculty, teaching about our courses and curriculum. Lewis & Clark has a general education requirement, and there are still discussions happening on this campus right now among the curriculum community and the faculty about ways in which that requirement may be changed or modified with particular attention to increasing diversity in the curriculum.

Also pedagogical practices, the way faculty teach their courses, it’s often the case that things will bubble up in the classroom, sometimes unexpectedly, and faculty can have all the goodwill in the world, but still be uncertain about what is the best way for them to help guide this conversation so that it’s productive and educational and useful. There are techniques and ways for people to learn some skills and also listen to each other, and that’s some of the work I’ve been doing at Lewis & Clark.

At Hamilton, from what was actually a student initiative, they have passed a sort of resolution to begin to address diversity issues by requiring each major at the college to have a course or set of courses that are particularly required to target diversity and inclusion in that major, which is an interesting approach to having a diversity requirement. I’m not saying that’s necessarily something Lawrence should do, but it’s an example of something I know other campuses are doing.

How would you describe your leadership style, and how do you think that will influence your tenure as provost?

I would describe my style as highly collaborative. I love conversations; I love hearing other people’s ideas. Something I learned about myself, actually, when I was at the conservatory, was that I was much better as part of an ensemble than as a soloist. I really loved being involved in endeavors that brought a lot of other voices together to create something bigger than what any one person could do. It’s absolutely something that characterizes my leadership style as department chair, then dean, and now as I’m about to become a provost. It’s just more fun to have lots of people in the room and hear lots of different ideas and then work together to come to a solution for a particular problem or to create some sort of new endeavor that people get excited about.

Kodat will officially assume the position of provost on July 1, 2017. Thereafter, Burrows will be lecturing full time in the Department of Psychology.

Photo courtesy of the Office of Communications   As Lawrentians celebrated the holidays over winter break, President Mark Burstein announced the selection of our future provost and dean of the faculty, Catherine Gunther Kodat. The selection committee was drawn to Kodat’s experience, temperament and love of the liberal arts. They believe these qualities make Kodat…