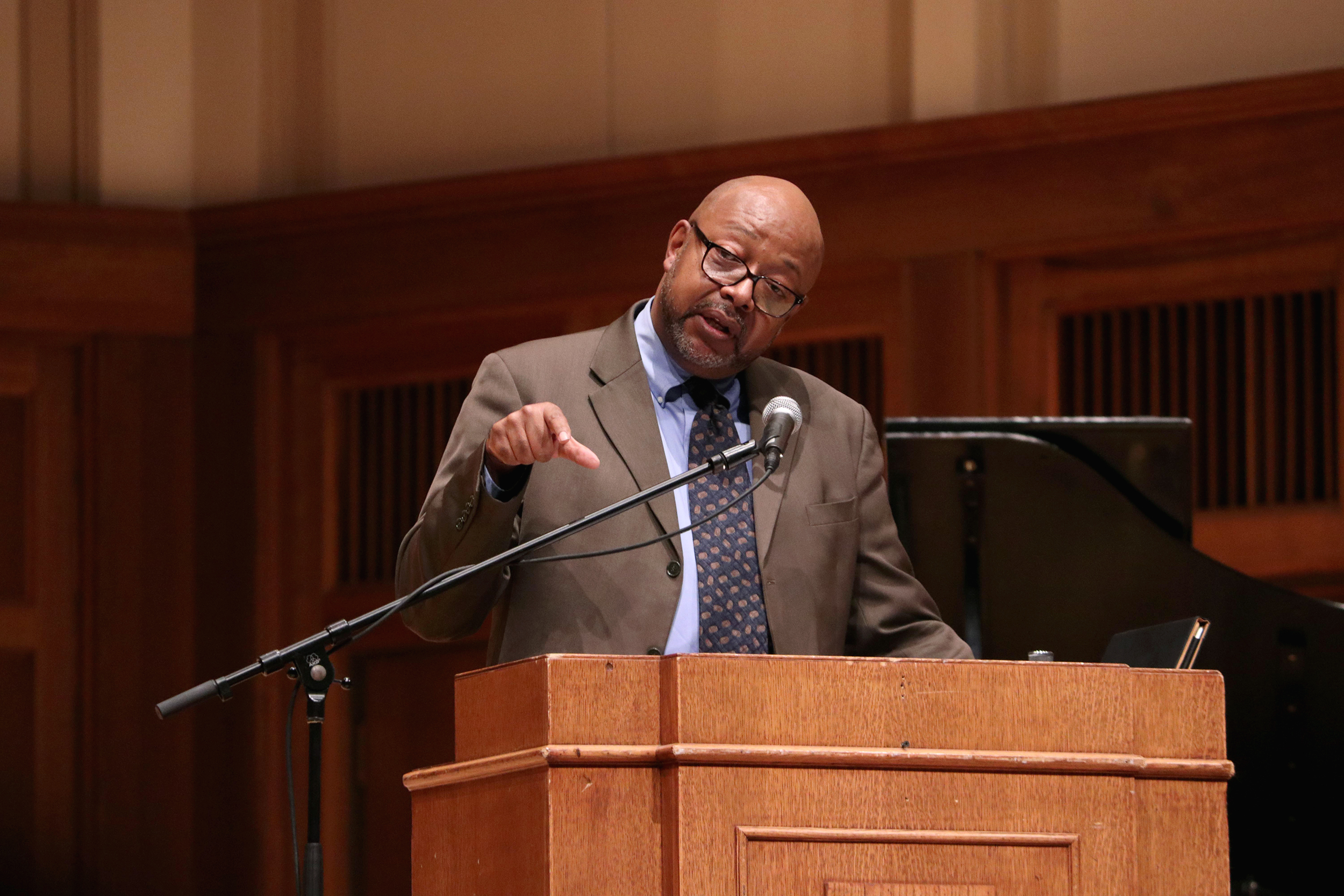 Last Monday, Lawrence partnered with the nonprofit Celebrate Diversity Fox Cities to hold a service in honor of Martin Luther King Jr. Day. The two-hour long celebration, titled “Refusing to be a Bystander to Racism and Injustice,” featured several speakers from Lawrence and the Appleton community. The keynote address was given by Pulitzer Prize-winning journalist Leonard Pitts. Many local leaders attended the event, including Mayor Tim Hanna, Representative Amanda Stuck and Outagamie County Executive Tom Nelson.

Ongiri shared a few words on the recent presidential election and the future of the country. “In an era where our incoming president is intent on building walls to separate us it is worth repeating that this country was built by immigrants and slaves, and the children of those immigrants and slaves,” she said.

Next on the program was the presentation of the 2017 Jane LaChapelle McCarty MLK Award. It was awarded to Sarah Long-Radloff. As a board member of Loaves and Fishes, the Salvation Army and Rawhide, Long-Radloff is an active member of the Fox Cities community and has been for the past 40 years.

In her speech, she spoke about the importance of active involvement in the fight for equality. “You don’t have to search for an opportunity; opportunities abound,” she said. “By refusing to be a bystander to racism and injustice, you can make a difference in the world.”

To introduce the winners of the 2017 MLK Essay Contest, St. Norbert Associate Professor of Education and Director of Student Teaching Abroad Bola Delano-Oriara, Ph.D., was welcomed to the stage. The essay contest winners, four elementary and high school students from local schools, read their essays on the topics of racism and injustice.

“A fire had started deep down in my core that I was not about to put out. The only way to stop racism along with ignorance is to educate people,” Appleton North High School freshman Kala Lones spoke. “Unfortunately, most people seem to be deaf when it comes to the voices of the oppressed.” At the end of the last essay, the students were rewarded with an enthusiastic standing ovation.

“Good evening, Appleton. I’d like to thank you all for sliding by tonight,” Pitts began with a quip about the icy weather. He quickly turned to the serious matter of how to combat racism and injustice. In a fitting tribute for Martin Luther King Jr. Day, Pitts’ address was punctuated with King’s own words. One specific phrase used by King in many of his speeches was “the fierce urgency of now.”

“Martin Luther King was not a man of infinite patience,” Pitts reminded. “[King] had come to remind America of the fierce urgency of now.” Pitts emphasized the fact that King’s dream from his most famous speech was not something that would come about by itself in the far future, but relied on real change made by real people.

“While we have been ‘I have a dream’-ing, the American justice system has created a new Jim Crow,” Pitts said. “If you want to make the spirit of Martin Luther King smile, you realize that ‘I have a dream’ is not about what might happen in the sweet by-and-by but about what we have to make happen here and now.”

Pitts also spoke of the dangers of historical erasure, calling the modern U.S. a “post-factual America.” He criticized the recent instances of states watering down history books to paint America in a more positive light. “African American history is a story of kidnap, chains, rape, work and the selling of human beings. We teach this history because this is what made us who we are. Without understanding what happened back then you cannot understand what’s happening right now.”

Pitts brought the speech to a close with a direct call to action. “Advocate, educate, participate,” he said. He pointed out that activists today have much better tools for communication than they did back in King’s day. “Offer your time, talent or treasure to those organizations fighting for what you believe. We’re called upon to go to work.”

Pitts also commented on what he believes to be the most significant thing people can learn from King’s legacy, being “the fact that they can protest.” He continued by stating, “I think that one of the things that’s happened with the millennial generation is that they have been made to feel powerless. I think people need to understand that change is possible and revolution is possible. There needs to be a mass movement of people who are sick and tired of the blatant and brazen disregard for the human rights of some of us in this country.”