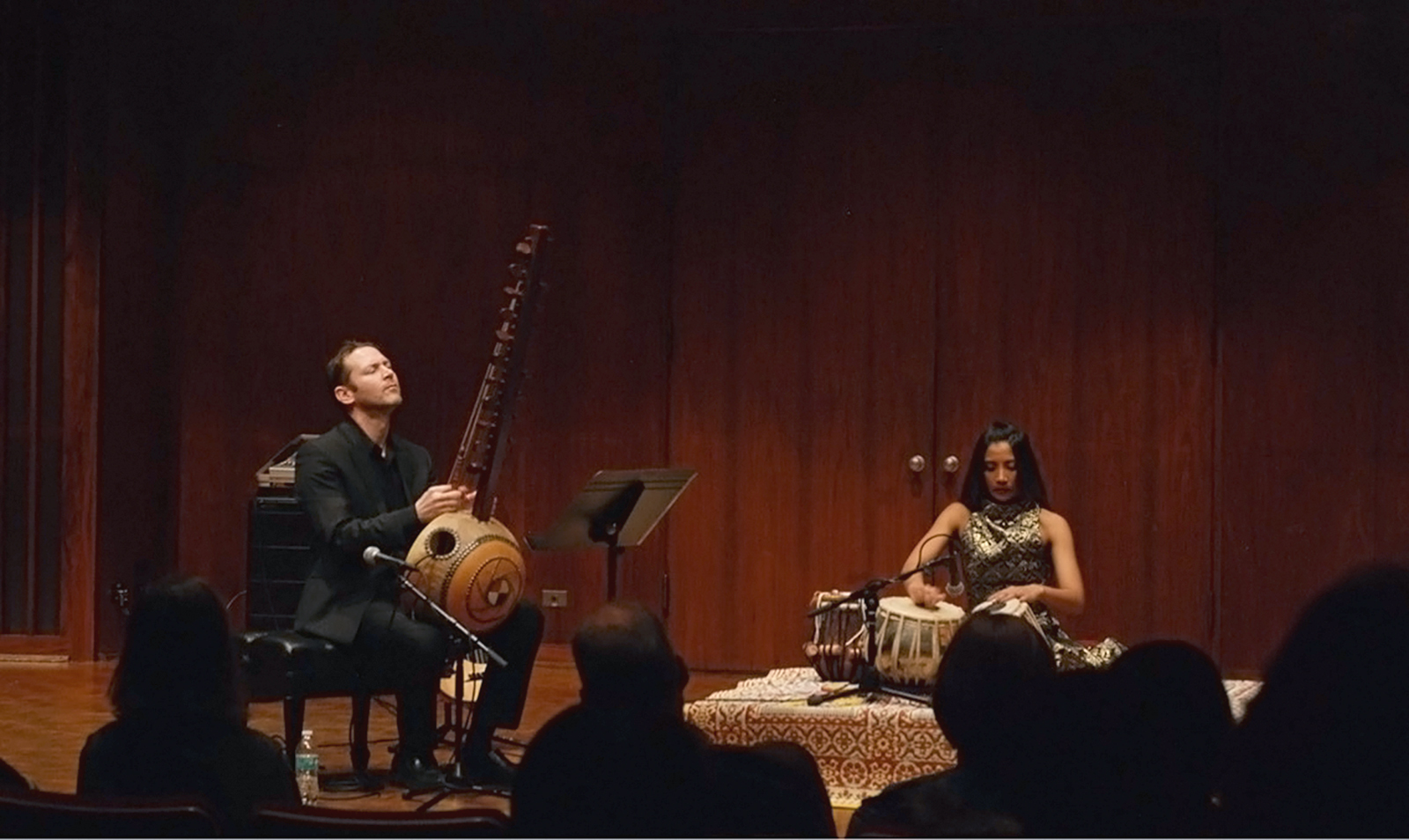 There is nothing quite like starting off Midterm Reading Period with two hours of relaxing world music. On Wednesday, Feb. 8, I, along with many other students and a handful of Appletonians, were able to kick back and relish in an impressive performance from Kane Mathis accompanied by Roshni Samlal. Mathis, who was a student at Lawrence for two years, is known throughout the world for his kora and oud expertise, despite being from the West.

As a student at Lawrence, Mathis studied jazz and classical guitar, but after learning of so much world music in high school, he realized that was what he wanted to devote his life to. When not studying at Lawrence, he used his breaks to travel to the Gambia and Istanbul, learning the kora and oud, respectively, from masters of the instruments. Flash forward to 2011 and—as stated in the program—“Mathis [is now] the first non-African to be endorsed by [The Gambia’s] National Center for Arts and Culture.”

The show opened with Mathis playing a solo kora piece, showcasing his talent on the instrument. The kora is made up of a resonating gourd with a long neck and two planes of strings—over twenty total. The complex style has the player produce basslines, chords, melody and contrapuntal figures simultaneously. I was quickly transitioned to a tranquil state as high textures flurried above me and bass twanged underneath, both voices swooping up and down. With eyes closed, it was hard to believe this sound came from two thumbs and two fingers. With eyes open, the four digits blurred across the strings, but Mathis’ otherwise stillness struck me.

For the rest of the six pieces—some of which had Mathis playing oud—Samlal joined him on tabla. As my ears adjusted to the kora in context of this new percussive and sometimes melodic voice, I realized how smoothly the many strings bled from one to another, ringing out over themselves lushly. But at the same time, the tabla’s sound was punctuated and precise, creating monolithic rhythmic figures with the tablas. While they interacted by locking into patterns together, it was harder to see how else they played off each other, as both instruments were highly active and virtuosic. The nuances of the instruments and respective music they are rooted in also made it tough to perceive the intricacies of their interplay, as knowledge of the traditions is important to connecting to the music as a whole.

Despite the disconnect I had with understanding and firmly grasping the performance, the two did a nice job of explaining the rhythms and other elements to the audience, making what they did on stage more accessible and digestible. This effort was appreciated, as it gave everyone something to grab onto other than just the sheer technique and meditative feeling so present throughout.

At some points, though, I found it beneficial and more moving to close my eyes and simply listen, not considering the complexities and specifics. More often than not, when covering a show, I can sometimes take too many notes or think too much when the best experience can come from purely listening. Lulled into a half-sleep, relishing the rich sounds, not thinking of the challenge of writing this column nor the work I had before or after, I bonded to Mathis and Samlal’s playing, moved by its illusionary duality—droning and active, calming and exciting.

A performance of music from a genre you are unfamiliar with has a pretty good chance of sounding all the same. This concert of West African, Indian and Ottoman music certainly did for me. But the ways we as listeners can try to understand it, love it and allow ourselves to be moved and inspired by it is where the music becomes interesting. To shun arts because you do not understand them—even if you try to and fail—is a mistake. More than just a surface-level understanding of what is happening can be gleaned, and as a listener, that is something I strive for and hope you do too. There is something beyond, often abstracted by our desire to critique and learn from the music rather than just listen.