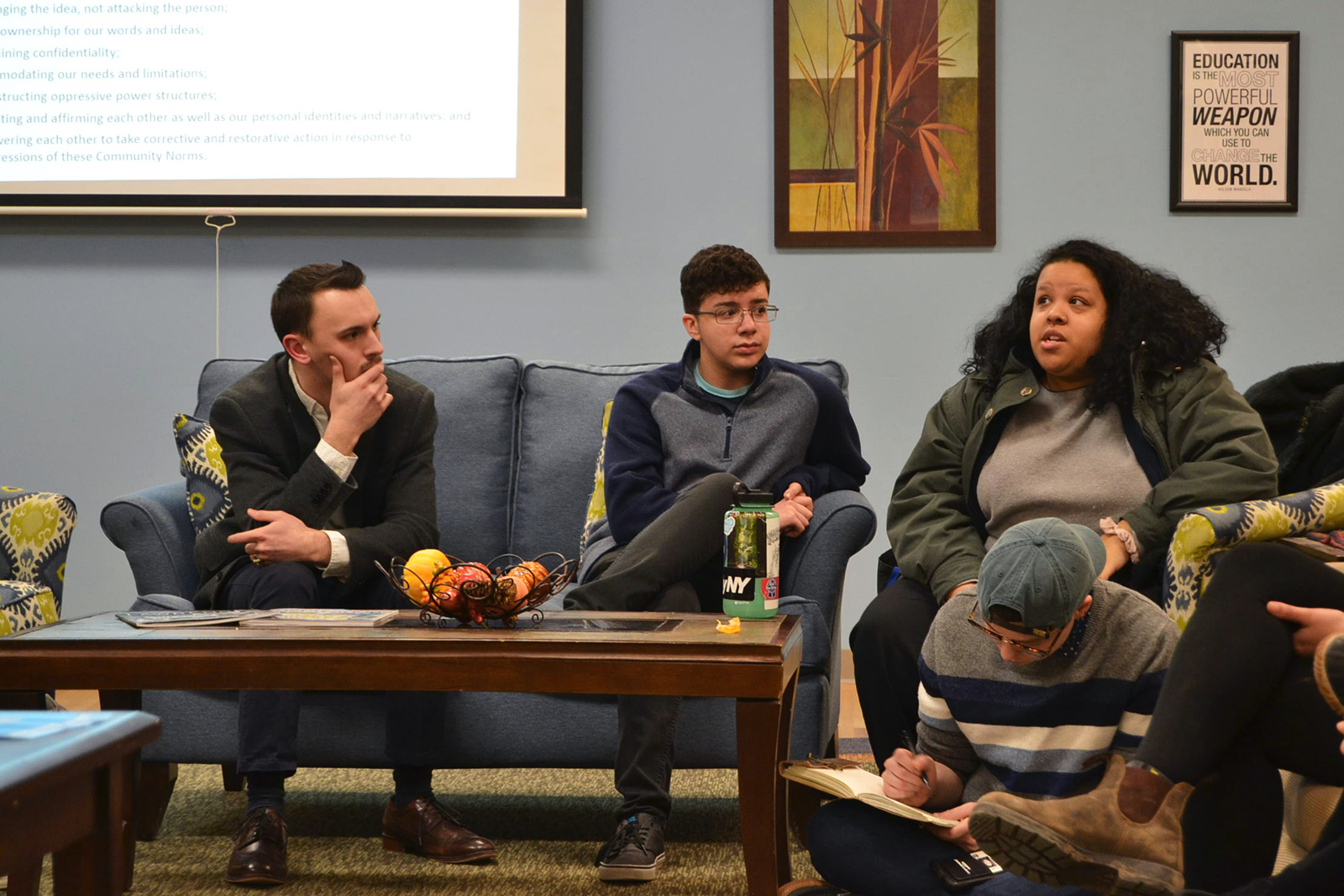 For many Lawrence students, having an LGBTQ+ organization on campus is very important because it provides a safe space as well as a voice for the queer community.

So when GLOW (Gay, Lesbian or Whatever), Lawrence’s LGBTQ+ student union, held a discussion on Feb. 16 about possibly disbanding, around twenty students attended to voice their opinions and emphasize the importance of having an LGBTQ+ organization on campus.

Vice President of GLOW and junior Dan Thomas-Commins said that the possibility of disbanding came up because there are not enough people involved in the group, explaining, “We get very little attendance at our meetings and it’s mostly the current board and then the previous board.”

The board consists of five people and with few people involved, it can be hard to do all of the work themselves. In addition, because attendance is low, it is harder for GLOW to be the voice for the LGBTQ+ community at Lawrence.

“I don’t know that we have the ability to speak for the queer community at this point, ” Thomas-Commins said.

While most students attending the discussion were opposed to disbanding the club, the discussion spurred a larger dialogue about how GLOW is perceived by the community, and the desire for change.

One of the big issues discussed was the name GLOW. Several students mentioned that they felt like the name was erasing non-gay/lesbian identities.

“The ‘or whatever’ insults people,” Kramer said. “When it was originally adopted, it was kind of considered a little campy. It was supposed to be playful, but I think that’s old and it’s out of date and it needs to change.”

As one student put it, “I’m not a whatever.” Since the meeting, it has been decided that the name will be changed to something more inclusive of all identities.

This conversation also brought up the issue that the group is often perceived as a place that is just for gays and lesbians, creating a sense of alienation for other queer students. GLOW tried to represent a broader range of identities in the past with the caucus system, which allowed for smaller sub-groups under GLOW’s purview dedicated to pansexuality, asexuality and so on.. However, “I don’t think it [worked] because it required people to, first, be into GLOW,” Thomas-Commins said.

Students also voiced interest in a transgender alliance on campus, since being transgender is related to gender identity rather than sexuality. There was also a discussion about how some students of color do not feel comfortable in the group because there is a majority of white students. Both issues are pervasive among LGBTQ+ groups and need to be addressed to create a safer, more inclusive community in any organization.

“I hate to say it, but LGBTQ+ politics in general skews toward white, middle class-ness. There’s a reason that bi and trans invisibility is common and people of color are not seen as much on the boards of even major LGBTQ+ organizations,” Kramer explained.

Another issue is the differing motivations for joining the group. “There are people who want to be radically queer and political and other people who are just looking for a support, a safe space,” Kramer added.

Students voiced concerns about feeling uncomfortable in GLOW in the past because of these differences.

“Most underlined by the end of the meeting was ‘we really do need a queer support space here,” Kramer said in summary of the conversation.

Since the discussion, the group has released a statement saying, “GLOW, as an official entity, can no longer exist.” However, the former board “will be working, more united now than ever before, toward building the space where all of us can find a home and a community” and “to form a working group that includes folks from all corners of the campus LGBTQ+ community, as well as some of the current board members.”

The group will move away from the weekly discussion format to having a place on campus where LGBTQ+ students can go to hang out and do work in a more informal setting.

The message placed an emphasis on an intersectional approach to be more welcoming to trans students and students of color and highlighted the importance of spending more time volunteering and engaging with the Appleton community. The first meeting of the working group will be announced at an unstated time to elect a president and treasurer pro tempore to hold LUCC recognition, while GLOW will not hold elections for a new board and the current board will step down once new leaders are chosen.

Although the future of the group is not completely solidified at this point, things seem to be moving in a more positive and progressive direction.

From left to right: junior Daniel Thomas-Commins, freshman Evan Rosado and junior Ashley Lagrange discuss the implications of disbanning GLOW. Photo by Emily Midyette   For many Lawrence students, having an LGBTQ+ organization on campus is very important because it provides a safe space as well as a voice for the queer community. So when…