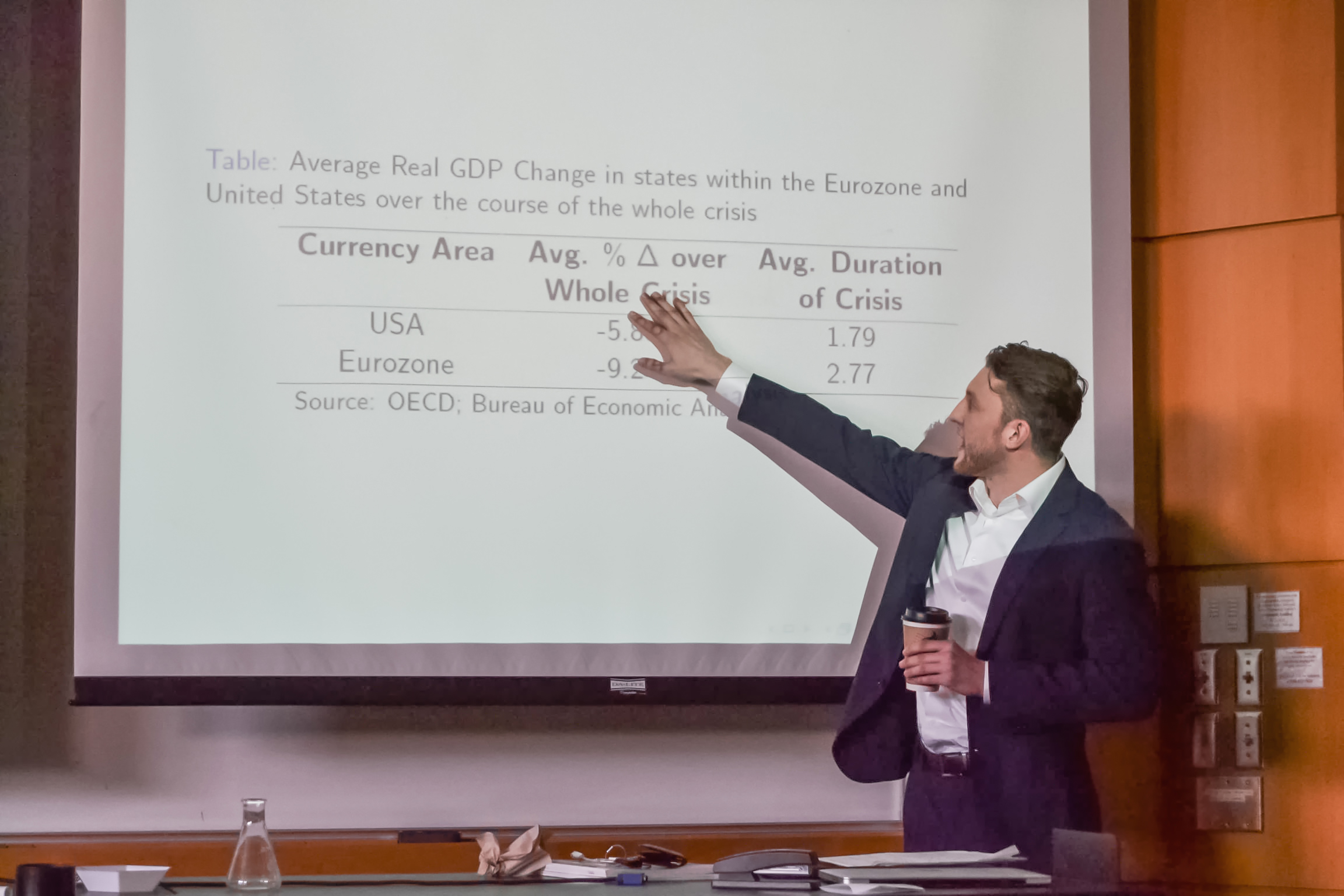 In the lecture, Aslett explained why countries don’t leave the Eurozone.

On Wednesday, April 4, Kevin Aslett ‘13 gave a lecture titled “Breaking Up is Hard to Do: Why the Eurozone will Survive.” Aslett was visiting from the University of Washington, where he is pursuing a Ph.D. degree in political science.

The colloquium took place on the first floor of the Thomas A. Steitz Hall of Science. In his lecture, Aslett summarized his paper by the title of his lecture, which he published in the journal Economies last year. In his paper he compares the Eurozone to a relationship, which gets harder and harder to end as time passes.

The Eurozone is the set of European Union countries that use the euro as their national currency. Aslett’s argument was that, although there are certainly economic drawbacks for many countries to be part of the Eurozone, they will not leave. He grouped the economic issues into four main points: differences in the economic structures of member countries, weak labor mobility, a weak fiscal center and a lack of a last-resort lender.

Aslett explained that there are two general types of economic structures: those with export-led growth and huge foreign market power and those with demand-led growth and less foreign market power. The export-led economies, which tend to be Northern European countries, shut demand-led economies out of international trade and so ended up with more money.

“The lack of labor mobility between countries in the Eurozone presents another economic challenge,” explained Aslett. In the US, if one state suffers an economic shock, workers move to another state and spread the weight of unemployment across the country. In Europe, workers cannot migrate easily. “This causes the shocks that occur to stay in their country, and not even out,” Aslett explained. “So there is a 20% unemployment gap between Spain and Germany.”

The U.S. has the executive branch as its fiscal center. The Eurozone does not have as strong a fiscal center as U.S. does, but relies on the European Union (EU) to collect and distribute monetary assistance when needed. “In Northern Europe, there is an image of Southern European countries as lazy and inefficient,” Aslett explained. “So, in the media, there is rhetoric around not redistributing wealth to them.” This means that the Southern European countries that need assistance cannot get it.

Furthermore, because all of the countries use the euro, they do not have their own last-resort lending banks, and have to rely on European Central Bank, which is wary about lending to countries that seem unable to repay the debt.

However, Aslett explained that these economic hardships pale in comparison to the damage that leaving the Eurozone would inflict. Leaving would mean creating an entirely new currency and renegotiating all existing economic deals in this new currency, while also continuing the vast number of daily transactions during transition.

“Countries would also lose their credit standing if they were to leave the Eurozone,” Aslett said. Using a common currency gives some measure of reliability, and this would be lost if the countries switched to their own currency. “And these countries need this credit,” said Aslett. Leaving the Eurozone also means losing the shared infrastructure and networks of lawyers, bankers and accountants that all member countries share because of their common currency. Considering all these results, leaving is a very harmful course of action.

“Then there are the large immediate costs of leaving” continued Aslett, “like the costs of printing new money, building new ATMs and fixing an exchange rate.”

Aslett acknowledged that the EU and the Eurozone are incomplete projects that still have some problems. But he explained that “we expect, over time, these problems will be fixed.” Among other changes, he predicted that “institutions will be developed to distribute wealth in times of shocks.” Aslett said, “the US currency situation took a long time to get right. We’ve had around 200 years to work it through.”

The fact that the Eurozone is a work in progress suggests the political benefits of remaining within the Eurozone. As a work in progress, reforms are continually being made. According to Aslett, the member countries “are in a privileged position to influence reforms as time goes on.” If they left, “they would lose this ability to get financial help and influence reforms.”

Aslett ended by reaffirming his stance that the Eurozone functioned like a relationship and member countries were already too well integrated to find it worth leaving.

In the lecture, Aslett explained why countries don’t leave the Eurozone. Photo by Emily Midyette. On Wednesday, April 4, Kevin Aslett ‘13 gave a lecture titled “Breaking Up is Hard to Do: Why the Eurozone will Survive.” Aslett was visiting from the University of Washington, where he is pursuing a Ph.D. degree in political…