“Peter and the Wolf” delights community 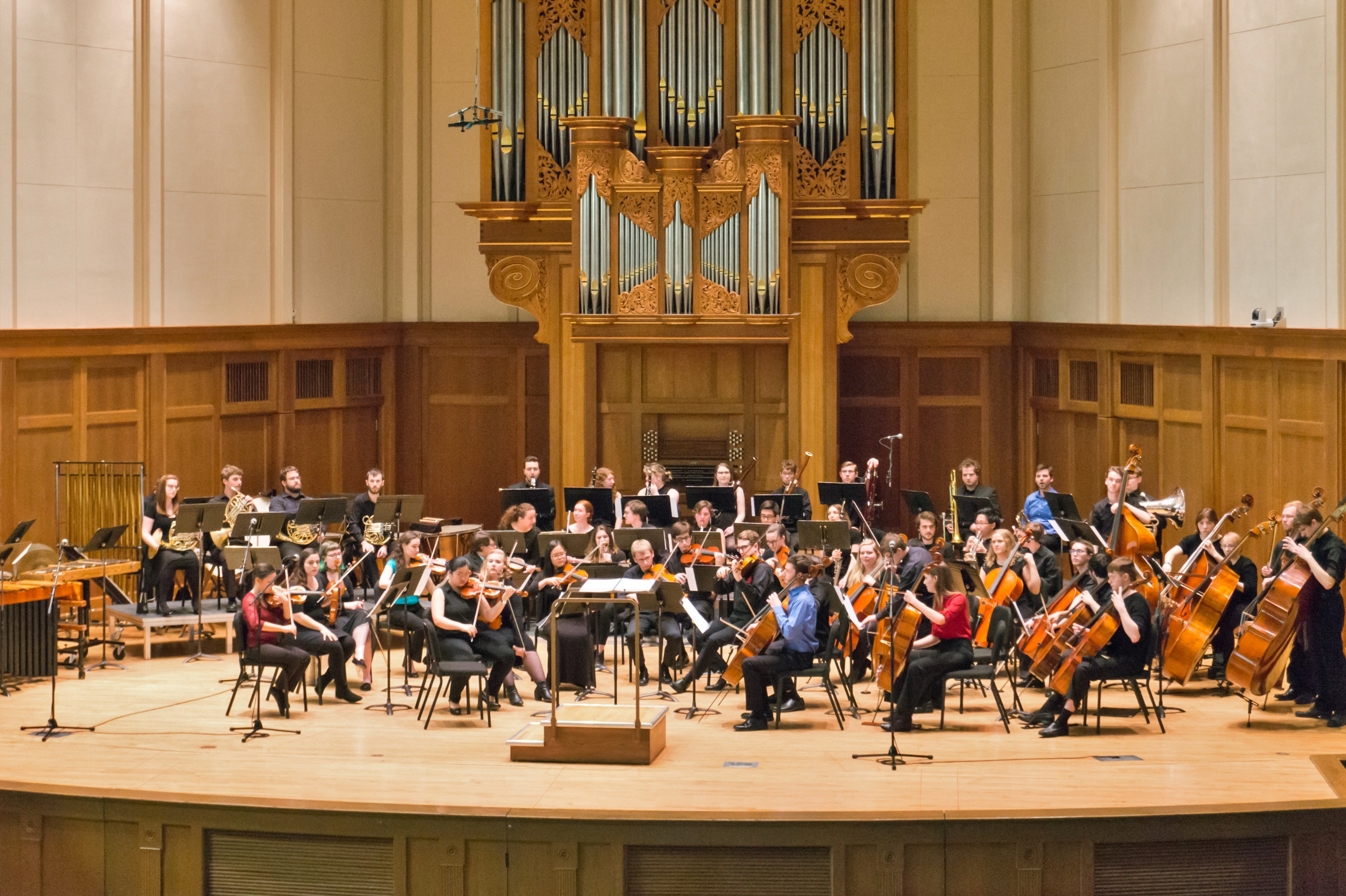 On Sunday April 23, the Lawrence University Symphony Orchestra performed a concert featuring Stephanie Sundberg’s “Curiously Deliberate” and Sergei Prokofiev’s “Peter and the Wolf.” The orchestra aimed to attract children and families with kid-friendly repertoire selections and an afternoon concert time.

The concert was conducted by Assistant Professor of Music Education and Associate Director of Bands Matthew Arau. The Lawrence University Symphony Orchestra split into two halves for this concert cycle. The other half of the ensemble performed Handel’s “Messiah” with their usual conductor Director of Orchestral Studies Mark Dupere on Friday night. Breaking into smaller units gave the conductors more artistic freedom and gave the musicians the chance to work in smaller sectional groups. Students from each group went to support each other at both concerts.

“Curiously Deliberate” was the first piece on the program. Composer Sundberg wrote this piece before she graduated from Lawrence in 2016. After an introduction by Arau, she spoke to the audience, saying that the piece represents “the pure joy of music” and the happiness she finds in composition.

The piece began with a dramatic three-note motivic call played by most of the instruments in unison. It worked its way into what felt like a warm spring scene and, later, a quick dance in uneven time. Sundberg’s composition brought out the whole spectrum of orchestral color. It was easy to hear her joy in the notes and see it reflected on the faces of the performers.

Prokofiev’s “Peter and the Wolf,” called a “symphonic fairy tale for children” by Prokofiev himself, was the focal point of the performance. Over the course of nearly half an hour, the piece tells the story of Peter’s dramatic venture into the meadow near his grandfather’s house. On his way, Peter encounters several animals who each play a unique role in his journey.

Traditionally, “Peter and the Wolf” is narrated by a single gifted storyteller who reads the plot aloud as the orchestra paints the scenes as they are described. For this performance, the orchestra decided to do something different. The narrator’s part was divided into seven separate roles (one for each character) to be taken by instrumentalists. The multiple narrators stood up from their seats to speak into microphones, sometimes acting out their characters comically as they read.

The narrators were freshman Rehanna Rexroat, sophomores Trace Hybertson and Liam McDonald, juniors Katie Weers and Sarah Ogden and seniors Justin Coyne and Adam Korber. The narrators were coached by Director of Opera Studies and Associate Professor of Music Copeland Woodruff. Woodruff, Arau, Dupere, the narrators and the performers collaborated to bring the show to life.

The performance was full of vigor and excitement; the orchestra brought all of the various scenes to life, whether charming or scary. Each character had a specific musical motif, such as a quick flute melody to represent the bird; this was designed to teach those unfamiliar with this type of concert orchestral music about one way it can be organized.

After the concert, the Lawrence chapter of Sigma Alpha Iota, a women’s Greek organization dedicated to supporting music, hosted an instrument petting zoo. Concert attendees were invited to come backstage and try out all different kinds of instruments. For many of the kids, it was their first time trying instruments like the trombone or violin.

The Lawrence University Symphony Orchestra’s next concert is on June 2. They will play Igor Stravinsky’s “The Firebird Suite,” and other works.