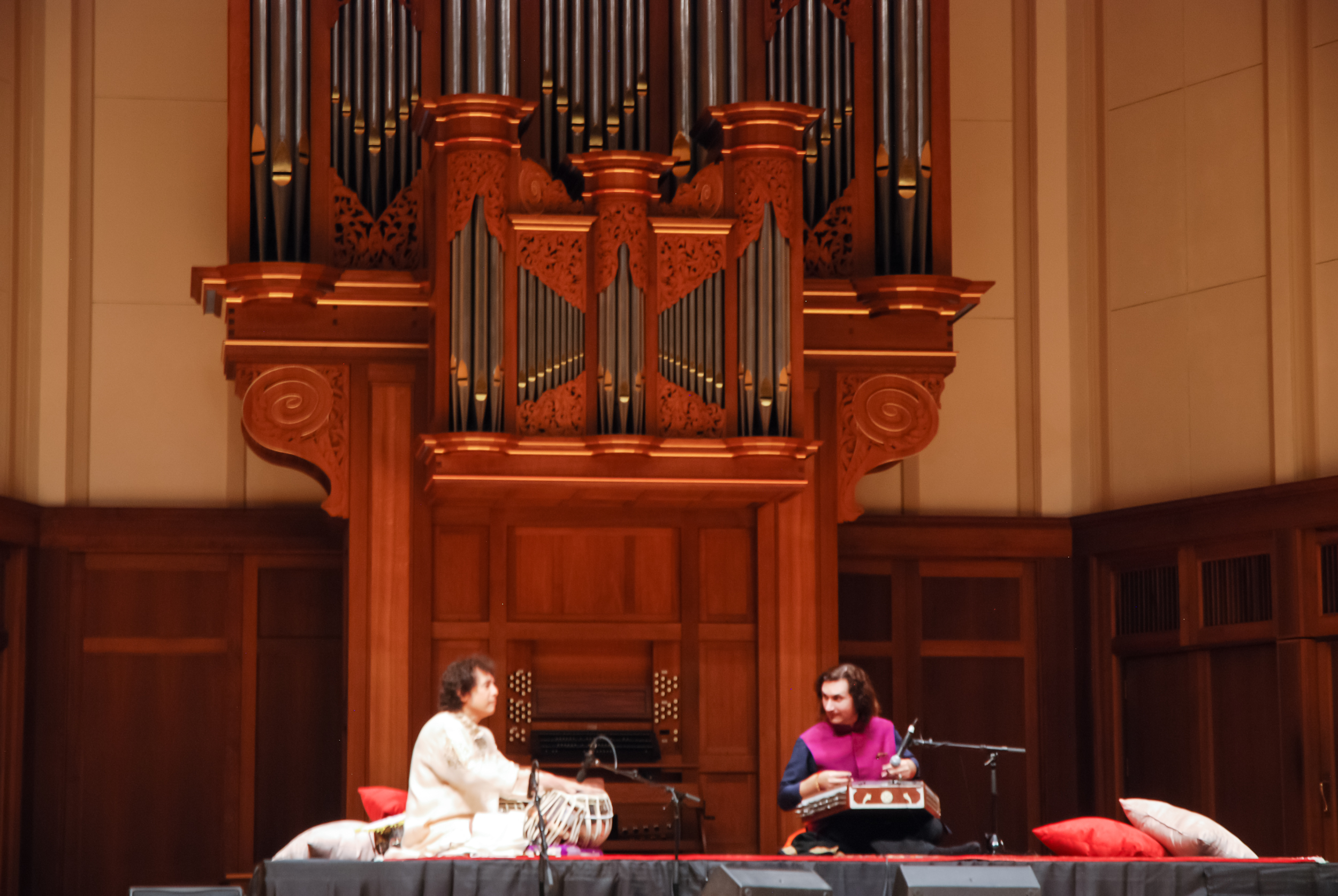 On Wednesday, April 26, members of the Lawrence University and Appleton communities gathered in the Lawrence Memorial Chapel for the fourth concert in the 2016-17 World Music Series. An internationally renowned duo, Zakir Hussain and Rahul Sharma, gave a concert featuring contemporary and classical Indian music.

Hussain—a “chief architect of the contemporary world music movement,” according to the program—is a virtuosic performer, a prolific composer and an inspiring educator. He has worked with musicians all over the world to put on performances that inspire audiences to learn more about world music.

Hussain’s main instrument is the tabla, a pair of membranophone drums that can produce all different kinds of sound. The drums are can be tuned to a wide range of pitches and are frequently re-tuned during performances. The player can press the heel of their hand against the drums’ heads to change their pitches.

Onstage next to Hussain was Rahul Sharma. Sharma—originally known by his association to his father, who is a santoor legend in India—has gained recognition of his own as a virtuosic santoor player. The santoor is a 72-string hammered dulcimer instrument played in one’s lap. Sharma is interested in playing all kind of music with it, including Indian classical, fusion and experimental music.

Before they began to play, Hussain made a brief announcement about the design of the night’s program. He called it a survey of Indian classical music from the past 2,000 years, including some more recent works, which would give “some sort of freshness” to the presentation. Hussain made several jokes with the audience, softening the atmosphere in the hall. He wanted the performance to seem casual and accessible, which it did.

While Hussain’s name was probably what drew most of the audience, he chose to let Sharma play alone for almost twenty minutes before eventually joining him. Traditionally, Indian concert performances unfold at a very slow pace over several hours. The first piece’s long santoor solo was an opportunity for Sharma to demonstrate the wide variety of techniques–plucking, rubbing, vibrating, strumming–he could use to make different sounds.

After a while, Hussain joined in on the tabla. Some of his fans, seated at the front, cheered when he began. He played many different kinds of patterns, sometimes accompanying the santoor and sometimes showing off by creating his own line. The tabla’s and Hussain’s ability to match the pitch of a melodic stringed instrument like the santoor was incredible. Beyond this, he also sometimes played impossibly quickly, subdividing the beat into smaller and smaller parts until he reached an explosive high point. The duo played complex interlocking patterns in short loops, creating a dreamy, endless improvisation.

After the first portion ended, the audience gave the duo a long standing ovation, to which Hussain sternly replied, “Thank you very much. Now sit down.” Although Hussain and Sharma are used to playing for all kinds of people, they seemed surprised at all of the small things the audience would applaud.

To end the concert, they performed a Kashmir folk tune adapted in a modern style that was a departure from the traditional pieces. Hussain grabbed a few smaller drums to go along with the tabla. They finished with a thrilling flourish that sent the crowd over the edge.