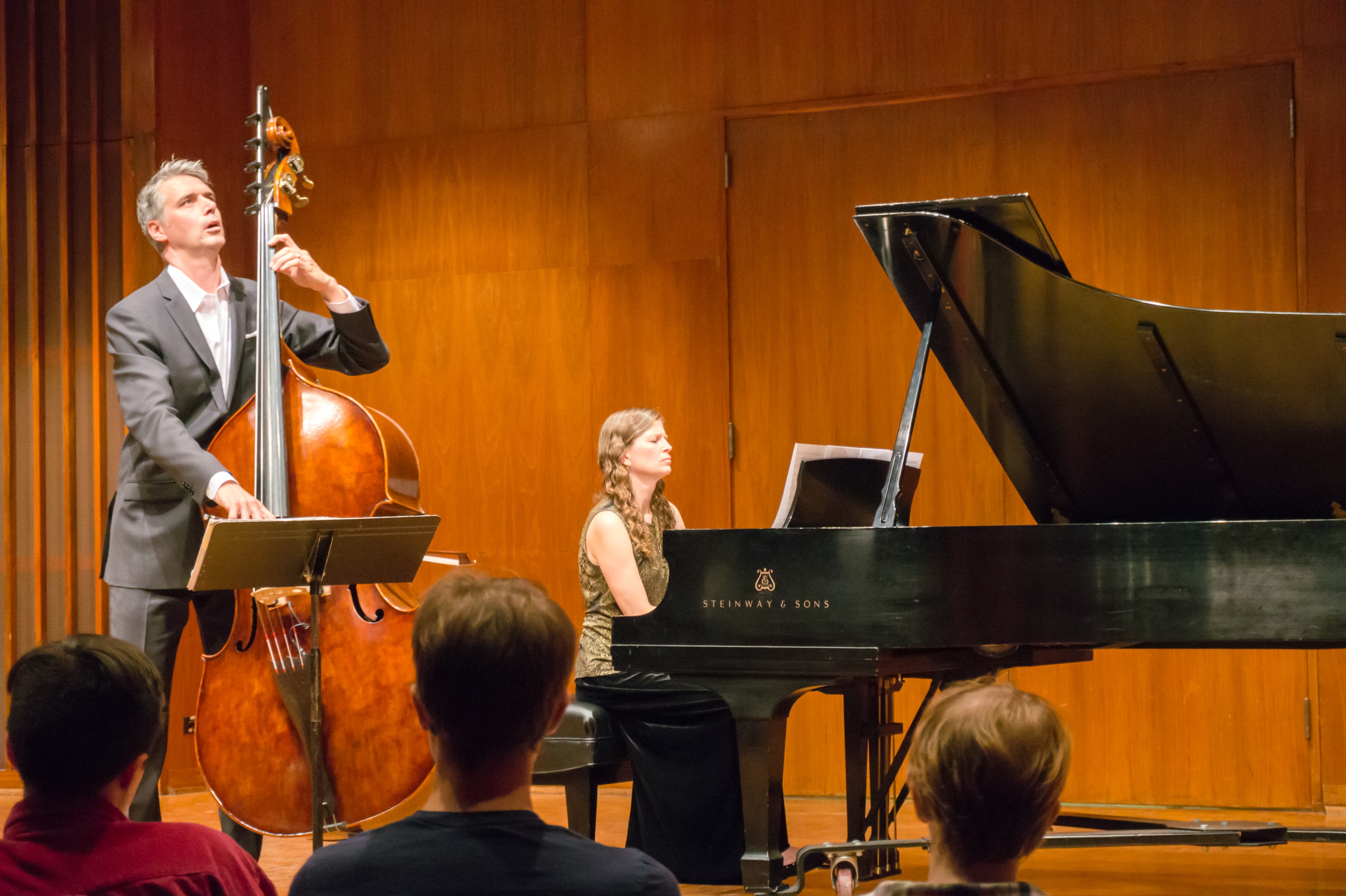 On Sunday, Sept. 24, Associate Professor of Music and bassist Mark Urness collaborated with Instructor of Music and pianist Mary Van De Loo to perform a recital. Harper Hall was nearly packed with eager attendees and printed programs ran out before the concert began. Once Urness and Van De Loo took the stage, they began the first piece, “Excursion” by Ellen Taaffe Zwilich. The piece began with a calm and soothing bass melody that required Urness to maneuver carefully, with his thumb high up on the bass fingerboard. This melody transitioned into some difficult runs, which Urness played with finesse. His presence onstage was completely natural; his strokes on the bass seemed organic and fluid even when they were fast, and Van De Loo’s accompaniment provided the support needed for such careful music-making.

After the first piece concluded, Urness told the audience that “Excursion” was a recent composition from June of this year, and that he had purchased it at a convention. He also introduced the second piece, Henry Eccles’s “Sonata No. 11,” by informing the audience that it was originally written for violin and continuo in Baroque style. Urness expressed his wish to recreate the Baroque texture in his playing, which I believe he did masterfully. Through leaps and bounds, with poised articulation, Urness executed the sonata with great feeling and technical prowess while Van De Loo played the accompaniment delightfully.

Next on the program was the famous “Kol Nidrei” by Max Bruch, a piece common in the cello repertoire. Urness invited a speaker from a local Unitarian Universalist congregation up to the stage to comment on the piece. The speaker said that “Kol Nidrei,” valued in Jewish tradition, is usually played before Yom Kippur and is supposed to stand for all vows by providing a preemptive absolution from future broken promises. Urness played the beautiful piece with solemnity and fervor, allowing the weight of the piece’s significance to sink in.

Urness closed the concert with a piece that he had composed this summer, titled “Frontiers: Immigration Meditations.” In four movements, the work means to both describe how our country has failed to realize the vision put forth by the Declaration of Independence and express a hope that we can learn to break down our barriers and discover commonalities with other human beings—particularly immigrants. The first movement, “Walls,” set out to articulate these thoughts; the second movement, “Sanctuary,” signified the basic human right that everyone should have a place to call home. Urness sang text from “A Prayer for Immigrants” by Reverend Jessica Vasquez Torres in unison with his bass playing in the third movement of his piece, titled “Justice.” The latter movement was certainly a highlight of the piece and of the concert overall; Urness’s vocals blended seamlessly with the tonality of his bass, creating a smooth and somber texture that evoked reflection. The final movement of Urness’s piece, “Inalienable,” brought the focus back to the first line of the Declaration of Independence and its meaning, bringing the captivating and meaningful work to its close.

Urness and Van De Loo’s performance was met with enthusiastic applause from the audience, who gave them a standing ovation. Their collaboration created an excellent concert that will likely stay with many for some time—and not just because of the fine musical example they set; Urness’s composition exposed issues that are relevant to today’s world. Hopefully, we can learn to embrace the hope that Urness described and work towards creating a better future.