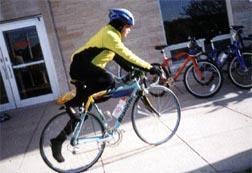 Eric Waldron, One of the team champions, sets off for his leg of the race.
Brendan Jones

Eric Waldron, One of the team champions, sets off for his leg of the race. (Andy York)

The first annual Lawrence University triathlon took place last Saturday, and went off without a hitch. Men, women, and teams all competed not to win, but to finish for themselves.The Lawrence triathlon combines swimming, biking and running in one race. The competitors started out in the pool of the Buchanan Kiewit Recreation Center. The race starts off with a swim of 450 yards. The competitors then get out of the pool, dry off, and put more clothes on for the bike ride. The competitors ran out of the door of the recreation center, and up Union Hill, to the back patio of the union. There they picked up their bikes, and embarked on a thirteen and a half mile bike ride though the streets of Appleton. The bikers ended up at the bottom of Union Hill, where they dropped their bikes, and began a two and a half mile run. The run finished up at the bottom of the hill again, and the triathlon was completed.

Sixteen individuals and four teams took place in the Lawrence Triathlon. Of the sixteen individuals, seven were Lawrence students. A majority of the members of the teams were also LU students. Many other Lawrence staff and faculty also participated in the triathlon. Race officials were pleased with the turnout for the race, especially the number of people from the community who entered the triathlon.

It was a very competitive triathlon as well. On the men’s side, LU professor Michael Orr came in first place with a time of 1:05:43. Another LU professor, Jeff Clark came in second at 1:09:22. The third place finisher, and fastest LU student was senior Dane Tice, who came in at 1:09:56.

The team competition was the tightest of them all. The top three teams were all within six minutes of each other. The team competition featured one member doing each leg of the race. The first place team featured sophomore Mike Swanson, senior Eric Waldron, and senior Ed Maxwell. They finished in a time of 1:02:43. The second place team contained two students and a father of one of the students. Senior Daniel Hurley, David Westerholm, and senior Rob Westerholm finished in second place in a time of 1:04:55. Third place featured three more Lawrence students. Sophomores Sarah Kaiser-Schatzlein, Brian Schnettler, and Khara Scheloch finished in a time of 1:08:04.

With the success of this year’s event, race organizers say that there will most likely be another triathlon next spring. If the success continues, look for this to be an annual Lawrence tradition. 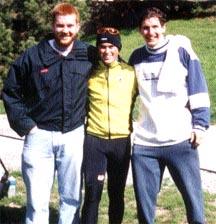 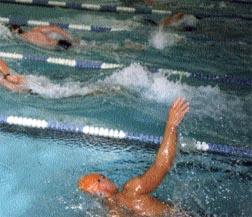 Participants start the triathlon with a 450-yard swim. (Andy York)