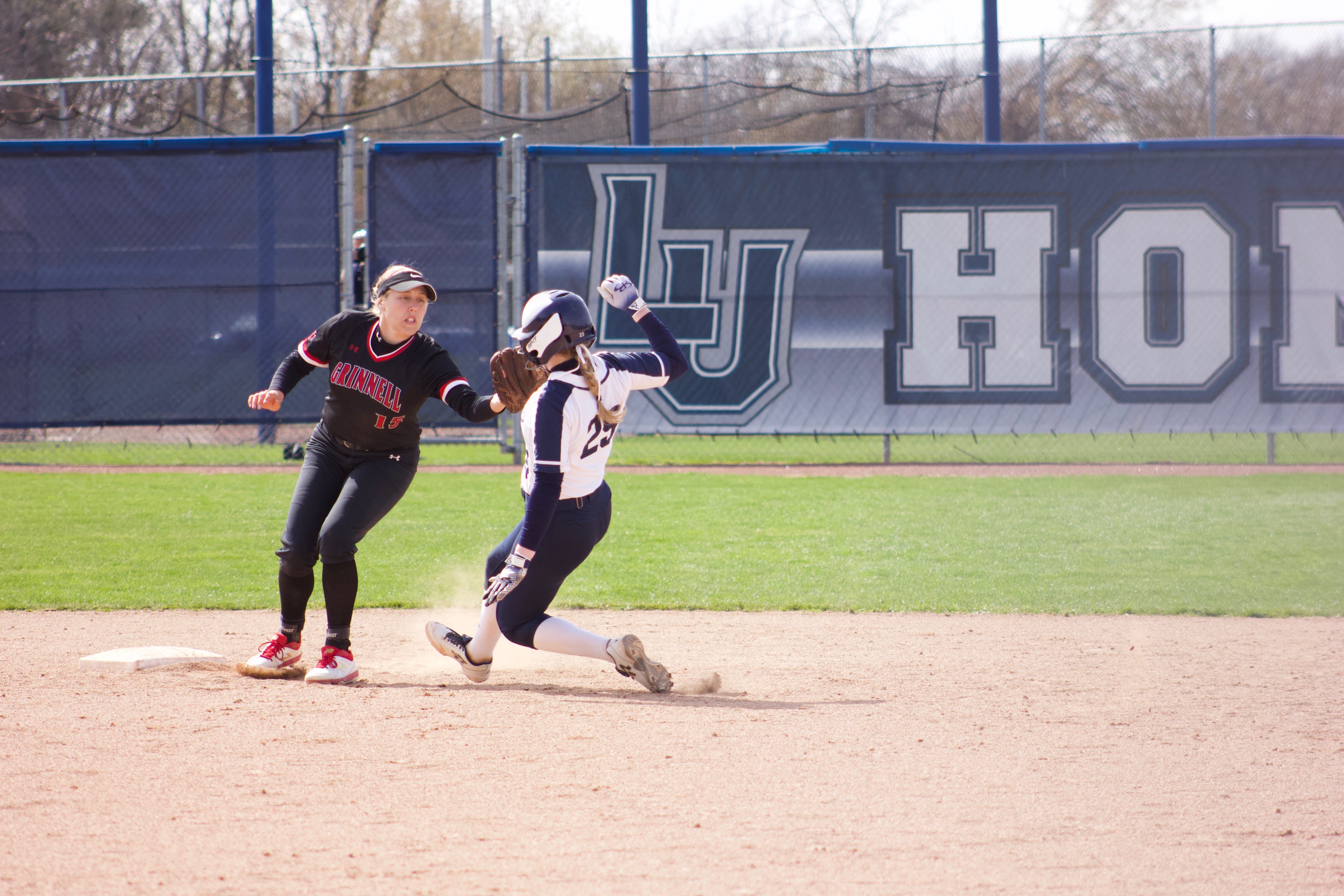 Junior pitcher Emilia Jackson helps herself by grabbing an extra base.

It has been a busy week for the Lawrence University softball team as they have played six games over three consecutive days. These games also marked the end of the conference season for the team. The Lady Vikes played double-headers against Illinois College, Grinnell College and Lake Forest College on Saturday, Sunday and Monday, respectively.

The Lady Vikes did not fare much better in the second game. Once again, Illinois College jumped on the board early scoring two runs in the first inning. They added another run in the second inning before blowing the game open by scoring three runs in the third inning to extend their lead over Lawrence to 6-0. Illinois College continued to pour it on in the fourth inning as they added another five runs to take the game 11-0 in five innings. Larson and senior Madeline MacLean recorded the only two Lawrence hits in the contest.

On Sunday, Apr. 28, the team faced off against a new opponent: Grinnell College. The first of the two games against Grinnell got off to a much better start as Lawrence recorded the first runs of the game. In the second inning, sophomore Liz Jonjak doubled to right field allowing senior Sophie Pedersen and freshman Leigh Birt to score. Grinnell cut into the Lady Vikes’ lead in the following inning as they scored a run making the score 2-1 Lawrence. Much like the previous day, the game went quiet for a while before Larson hit a home run to lead off the sixth inning. That homer was the end of the scoring and Lawrence went on to win the game 3-1. Jackson pitched a strong game, as she only allowed one run, three hits, did not walk a batter and struck out one in seven innings. This strike-out marked her 200th career strike-out.

The second game, however, did not go Lawrence’s way. Grinnell scored early and often in this game as they racked up nine runs in the first three innings of the game. Lawrence was finally able to keep Grinnell from rounding the bases in the fourth inning, and they were able to add a run of their own as senior Rachel Urich hit an RBI double that scored Jonjak. Going into the fifth inning, the score was 9-1 Grinnell. In the fifth inning, Grinnell added two more runs. Lawrence responded with a run of their own as MacLean reached on a fielder’s choice that allowed freshman Chapin Grumhaus to run home. Grinnell kept it coming in the sixth inning as they added another three runs to win the game 12-2.

Finally, Lawrence ended their Midwest Conference season with a double header against Lake Forest College. Rainy weather forced the games to be moved to the Mel Nick’s Sports Complex in De Pere, Wisconsin, home of the St. Norbert Green Knights. The Lady Vikes had a strong showing in the first game; however, Lake Forest hopped on the board first as they scored a run in the top of the first inning. Lawrence responded by adding three runs of their own in the bottom half of the inning. MacLean singled to right with the bases loaded, bringing junior Amanda Karnatz home. Then, Jackson drew the bases-loaded walk to send Larson home. Finally, Pedersen reached on a fielder’s choice, allowing junior Maria Reiter to score. Lawrence really blew the game open in the third inning where they racked up eight runs to extend their lead to 11-1. The inning started with a Larson homerun and things kept rolling from there. Pederson hit an RBI double to left scoring one, Urich hit an RBI single that scored another, Karnatz hit a two-RBI double to left-center, Larson came back up in the inning to hit an RBI single to left and a MacLean two-RBI single up the middle rounded out the scoring for the Lady Vikes. Larson is currently two home runs away from the season record. Lake Forest was unable to respond in the game and Lawrence took home the 11-1 victory.

Unfortunately, the second game did not go as well for the Lady Vikes. Lawrence was able to jump out to an early 1-0 lead on a Larson single that scored Karnatz in the first inning. After that, the game did not go Lawrence’s way. Lake Forest scored three runs in the second inning, another run in the third and had a six-run sixth inning to win the game 10-1.

At the end of all the games, Lawrence finished the Midwest Conference regular season with a 9-9 record. While the season was full of ups and downs, there were many moments for the team to be proud of.