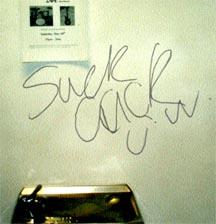 Sage Hall residents woke up Sunday morning to find statements criticizing former LUCC president Chris Worman scrawled on the walls of the hallway on third floor, as well as in the bathroom and the elevator. A car parked outside of Sage exhibited similar graffiti.Although vandalism rarely occurs at Lawrence, this case was unusual because it targeted an individual person. The fact that neither Worman nor the purported vandal reside in Sage Hall compounds the senselessness of the act.

Uecke expressed disappointment in regard to the incident. “Typically, students take good care of their environment and don’t typically take out acts of vandalism on property or against certain individuals in a public manner like this. So I would say it’s unfortunate, because we have not in the past had these kinds of things happen very frequently.”

Campus Security, in turn, notified the custodians, who spent most of Sunday attempting to remove the graffiti. The inflammatory statements, written in permanent ink, proved so difficult to remove that Physical Plant sent painters to Sage to cover the damage.

According to the department of Physical Plant, workers are not typically called into service on weekends. Due to the extent of the damage and the personal nature of the insults, however, Physical Plant decided that removing the offensive remarks as quickly as possible would be best course of action.

The painters continued to work on third floor through Monday. The noise from taping and fumes from the paint distracted Sage Hall residents.

Third floor resident Amy Dendy expressed frustration with the perpetrator for disrupting residence life: “I don’t understand why they can’t confront a person if they have an issue with him, and why they had to put it all over the walls when that person doesn’t even live in the hall.”

Some students, however, found the situation less disruptive. Adam Bruss, RLA on third floor Sage, commented, “I thought it was distasteful, but it didn’t really invoke a big reaction in me.”

Bruss added that third floor needed a new paint job before the vandalism and stated that the floor now looks more appealing.

Worman, the subject of the graffiti, learned of the incident on Sunday morning when friends alerted him to the situation.

“Initially, and I’m sure not surprisingly, I was a little upset, but then I was rather struck by the absurdity of the situation, and I proceeded to find it quite humorous in a very sad, pathetic kind of way,” Worman reflected.

Worman labeled the incident a “wanton disregard of things that I think Lawrence tries to ingrain in students as social responsibility and that I know Lawrence supports.”