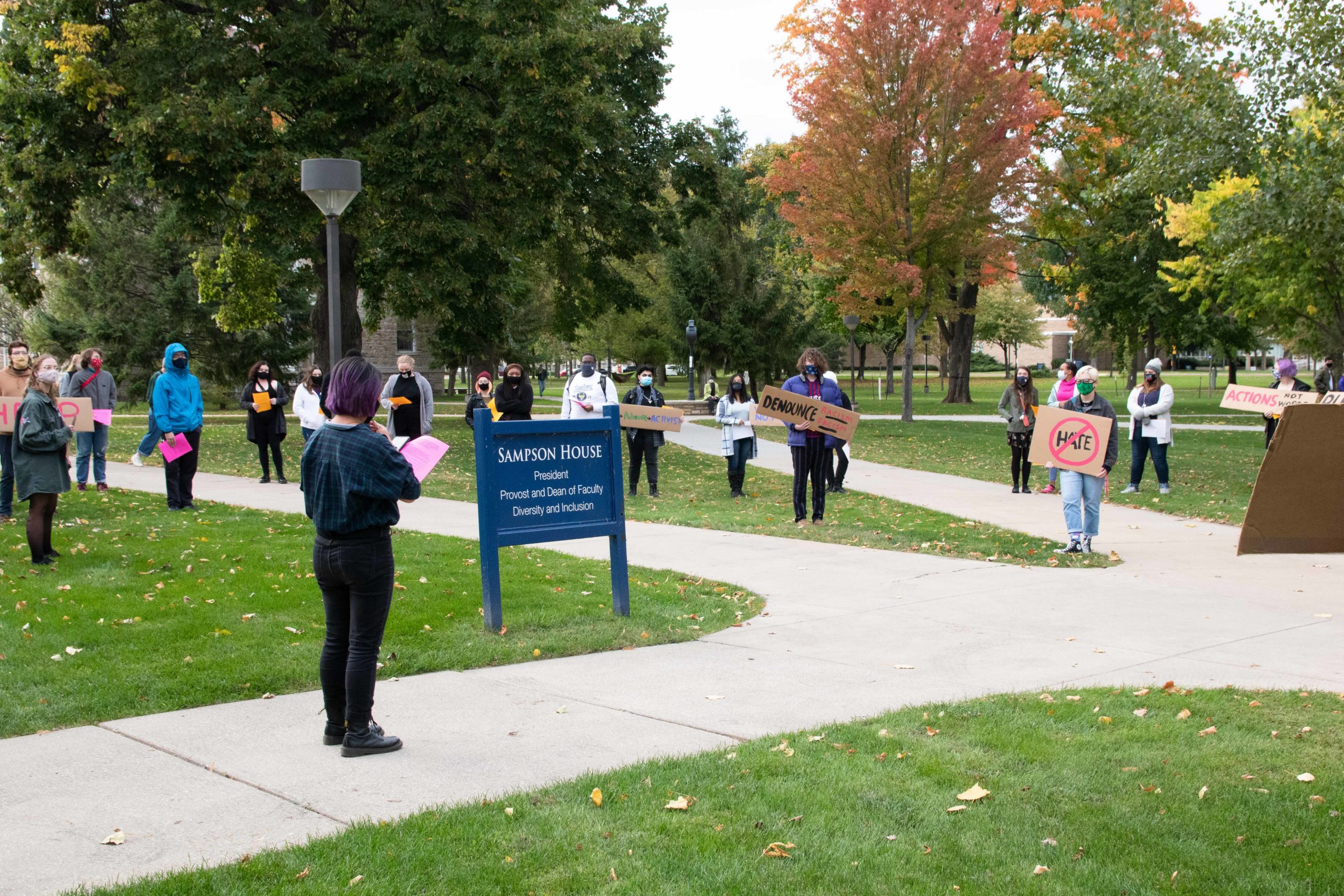 A student-led demonstration in support of marginalized students was held Oct. 2 in front of Sampson House, following an anti-Semitic and racist hate crime near campus that occurred Sep. 26. Student Rowan Young* and other organizers used the demonstration to demand a more comprehensive response, including a public denouncement of bigotry, from the administration in defense of marginalized students.

About 100 people gathered around Sampson House for the actual event, including students and faculty. Campus Safety was present as a precautionary measure.

The idea for this event was originally circulated on social media in a post within a Lawrence Facebook group. When organizers asked about student interest in a demonstration via a poll, 46 students indicated they would attend the demonstration, 25 students indicated they needed more information and 19 students said their response was dependent on the content of the polarization panel, which was held on Sep. 29, after this post was made, but they were more likely to attend.

Young also asked students in the Facebook group to anonymously fill out a survey about their experiences with discrimination from Lawrence administrators and professors. “It was atrocious,” Young said.

Young and other organizers also claim that the administration has a historical record of inaction in terms of helping marginalized members of the student body, and they hoped the demonstration would bring attention to this.

“It’s disappointing when the administration has made it very clear that their priorities are their image and their funding more than their students,” junior El Horner, one of the student organizers, said.

After informing the Committee on Diversity Affairs, the organizers collaborated with other members of the student body to establish the agenda and  details about the demonstration including time, location and methods of public speaking.

During the event, some individuals spoke publicly about their personal traumas related to the administration. Issues such as lack of response, procrastination on housing resolutions for queer students, sexual harassment from members of student organizations, financial discriminations from professors and ableism from the Center for Academic Success were among the topics addressed in the speeches.

“I don’t really expect any changes due to the past records of the administration,” Young said, “but I certainly hope something will happen.”

In addition to the students who felt the need to convey their message, others attended in order to support the Lawrence community as a whole.

“I came here just to support others and to see what they have to say,” one professor said. “This event should be a continuous process, and I hope it works for the best.”

Vice President for Diversity and Inclusion and Associate Dean of the Faculty Kimberly Barrett responded to the students’ demands on Oct. 5.

“It is unfortunate that these students have to come to the point of demonstration,” Barrett said, “but I am happy that they let us know how they are feeling.”

According to senior and organizer Isaac Wippich, one of the demands of the protest was for Lawrence to instate an official hate speech policy, which Barrett said is currently in the works. Barrett expects the new hate speech policy to include comprehensive measures of how to approach hate speech on campus, a definition of hate speech and a description of the consequences for hate speech.

“This requires a campus discussion, and the students would like the policy to be done this month,” Barrett said. “There’s a hard line that we certainly do not tolerate any form of hatred on our campus.”

Although Barrett emphasized her efforts to collaborate with student leaders on issues of equity and inclusion and to promote anti-racism at Lawrence, she acknowledged that this demonstration indicates a disconnect between the student body and the administration. Barrett said that, prior to the demonstration, she was unaware of the cases of discrimination described by speakers at the demonstration.

“You can never communicate enough, and we haven’t been communicating as much as we need to,” Barrett said. “But we are already in sustained dialogue with students, faculty, staff and leaders from the Committee of Diversity of Affairs and Lawrence University Community Council.”

Responding to the demonstration, Barrett promised to implement stronger communications between the administration and student body and to continue to work for all students’ equity. She also plans to look into these individual cases; however, considering the fact that these cases were previously unheard, Barrett stresses the need for a better communication platform for reporting cases and general complaints for both student body and the administration.

As further efforts from the administration are needed in the future, Barrett feels sad that some students have to experience such personal traumas.

“It saddens me when these individuals have to go through these difficulties because it is my job to assure everyone is standing on the ground of equity,” Barrett said. “If there is anything I want to say to the student body, it would be [that] we are all working towards a mutual goal together for positive changes with good will and humility.”

This story has been updated with the correct information. We apologize for the error.