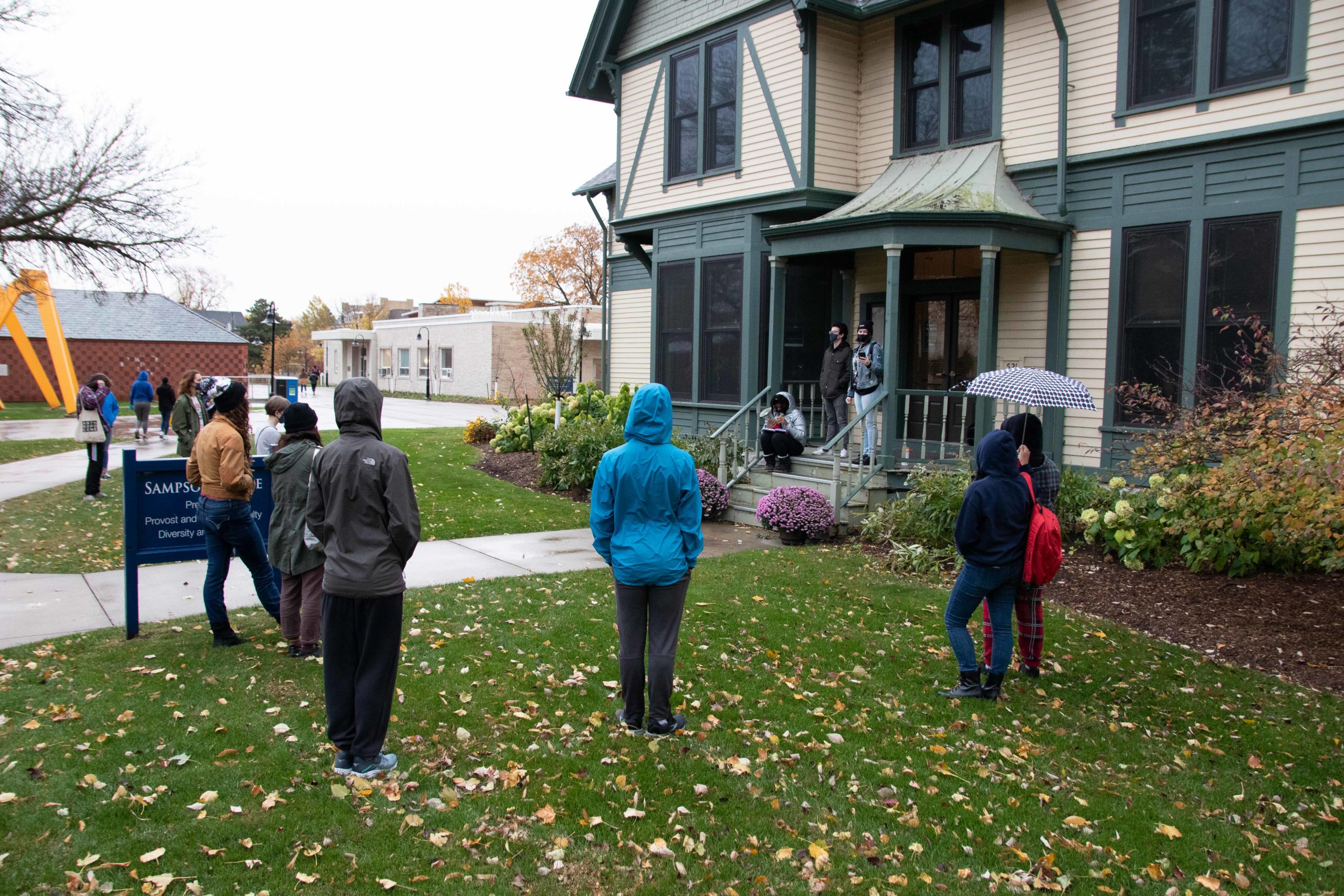 Students protest police brutality outside of Sampson House on Oct. 16 in an event organized by the Lawrence Liberation Front.

With the mission to spread information about social and political issues, the newly formed Lawrence Liberation Front (LLF) is making its presence felt on campus through public protests and recruitment efforts. In the near future, LLF plans to expand to more concrete action projects to improve the conditions for Lawrentians both on campus and in the Appleton area.

A student protest led by LLF in support of Alvin Cole, a victim in a recent police shooting, Cole’s family and other victims of police brutality, was held by the organization on Oct. 16 in front of Sampson House. About 25 people gathered around Sampson House for the event.

According to the “Milwaukee Journal Sentinel,” Cole was shot and killed in the Mayfair Mall parking lot in Wauwatosa, Wis. on Feb. 2 by Officer Joseph Mensah, who will not face criminal charges, after the decision made by District Attorney John Chisolm on Oct. 7. Protesters in Wauwatosa marched on the street demanding justice for Cole.

During the LLF event, the two speakers, sophomore Gustavo Zuniga and freshman Ellie Lutterman expressed support for the protestors in Wauwatosa. They wished to raise awareness about racial injustice and police brutality.

“This event will be a beginning of our actions,” said Lutterman. “Once we have more volunteers and members, we will be able to have greater supports and do greater things.”

Zuniga, the founder of LLF, wants to take immediate action and establish programs for the benefits of the student body. According to Zuniga, LLF has not finalized plans for how to streamline aid, but they are hopeful the organization will be able to facilitate direct assistance to students.

“We cannot wait until the bureaucracy makes a change for us, but people in the Liberation Front can make a change right now,” Zuniga said. “We are doing a lot of little things, for example, the mutual aid.”

One of the aid programs LLF is currently working on, Zuniga said, is a food aid delivery program in cooperation with the Student Food Pantry. Zuniga is concerned that many students do not have a private vehicle for transportation, and they might not be willing to go off campus due to the concerns about COVID-19. Especially during the winter, Zuniga worries that students might encounter difficulties if they do not have extra food in their dorms. The organization will be discussing further details and procedures for the program with Associate Dean of Academic Success, Kate Zoromski, this week.

LLF also conducts weekly reading sessions via Zoom every Sunday. According to Zuniga, the participants read materials which tend to feature less mainstream political perspectives. Right now, Zuniga and other members are reading “The States and Revolution” by Vladimir Lenin. The materials provide alternative political views to the two-parties perspectives, as people’s views might be changing under the current political climate, Zuniga said.

In the future, Zuniga wants LLF to expand into the Appleton area and help people in need by providing mutual aid, education and teaching self-defense. However, the organization itself is still in a developing stage, and it is unknown how the programs will turn out to be, Zuniga said. More skilled people such as artists, people with first-aid training, video editors and various other roles are needed for establishing further programs in the future.

“We are here, we want to listen to everyone’s idea and help students on campus.” Zuniga said. “We want people to feel safe and be able to have self-determination as they can defend themselves.”