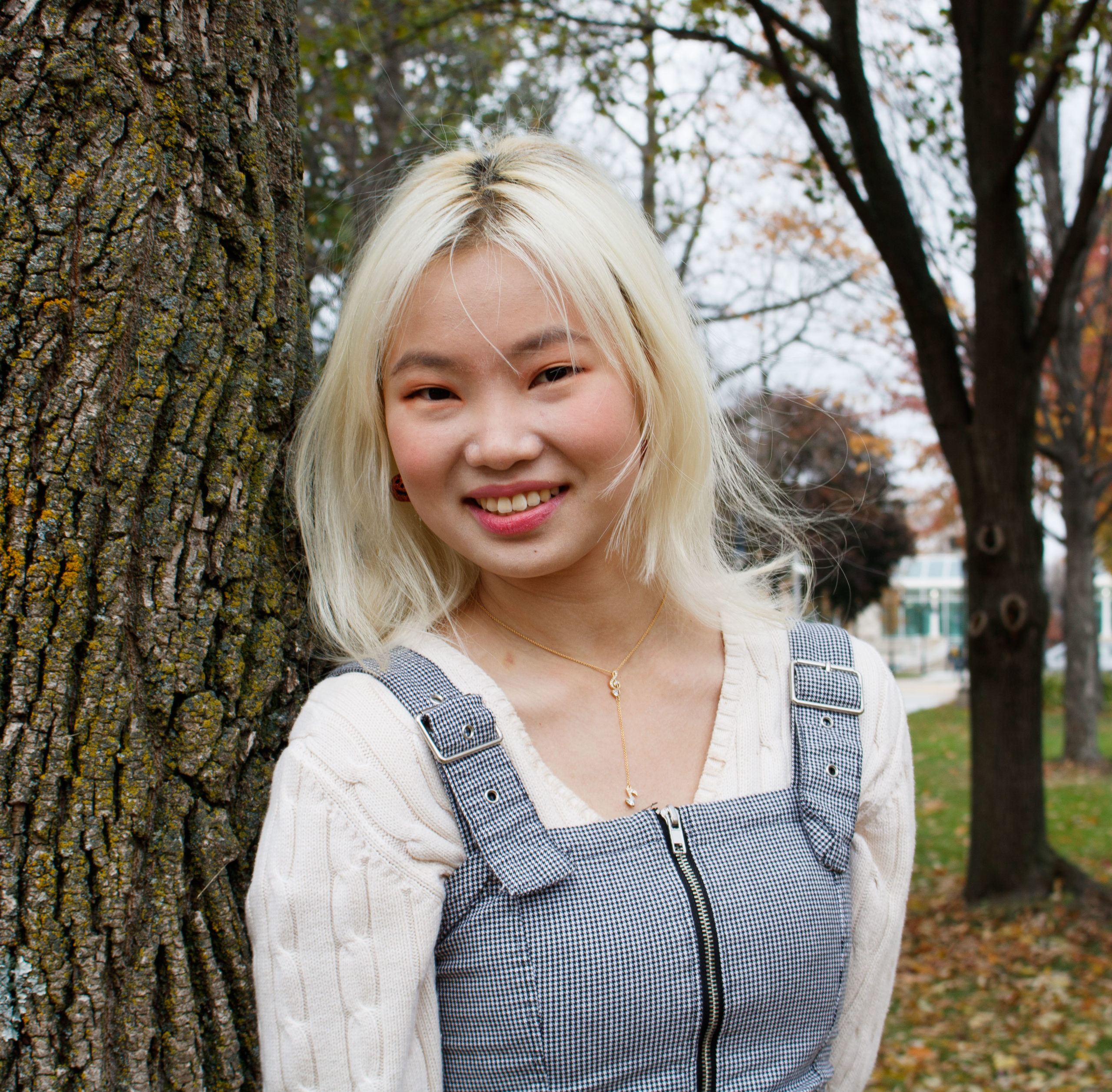 Subculture on Main strives to raise awareness of the diversity of people and important issues on the Lawrence University campus. Care is taken to give equal platform to unique individuals and to listen to their stories with an open mind. Interviews are reflective only of the interviewee and not of their whole group.

Yanni Yang (‮杨妍旎‬), a sophomore psychology student, studies at Lawrence far away from her home in Chongqing (重庆), China. Her hometown has a cyberpunk cityscape where subways pass through apartment buildings, and everything is stacked and layered with bustling people and neon lights. Yang adores the urban atmosphere, which is quite different from Appleton she noted. Yang belongs to some very small populations on campus including a music production studio, a choreography circle and one of the world’s newest religions. “I’m a dog and chocolate lover, too,” she cheered.

“I decided back in high school that I wanted to study abroad. [I could] finish my bachelor’s degree in America, and then come back to China to work,” she said. “It would be more liberal, in a sense. I would come back with more critical thinking [if I were to study] in a liberal arts environment. I get to choose a different major, which is very different from the Chinese college and university system. You can only choose one program,” she explained, “and you are predetermined by a score like an LSAT, but you only have one chance at it. But COVID and current events are making me think that maybe it is time for me to go back home — they have at least influenced my decision.” The national college admissions exams she talked about are called gao cao (‮٠*&‬ز), which essentially tell you which areas of study you are eligible to enroll in and, as she describes them, are most similar to the French Bac tests. “If you have [a] high score, you can apply for engineering, mechanic or doctors.” She went on, “But if you have low scores, I am not sure what you can apply for. Some students, after they graduate, don’t end up finding a job that’s applied to their degrees.” Because she did not want this to happen to her, Yang chose to choose her own path by attending Lawrence in the U.S.

Yang chose to study psychology because she is moved by all the complicated issues she sees in the world. Her favorite DJ, Avicii, died by suicide, and other musicians face so much pressure from the public about their image. A main problem she mentioned is body image. When her favorite stars get mocked for gaining weight or having a chronic illness, it makes her feel awful. “Even in China, people think it’s a good thing [commenting on weight gain/loss] to talk about, but it’s really not nice,” she said. “And then there is the divide in the Black Lives Matter [BLM] movement. It seems like between ‘all lives matter’ and ‘black lives matter’ we forget to include Asian issues.” Yang continued, “[BLM] is a serious issue […] Some of my friends are afraid to do certain activities because of their race. When I enrolled in an ethnic studies course here, I got to learn more about these problems.” Yang explained, “The Chinese don’t have a problem like [the BLM controversy] on the scale that Americans do. I encouraged one of my friends to participate in a synchronous discussion so he could also benefit from learning about this. We don’t vote over there, and so people are not so involved in policy and social justice.”

When Yang is not thinking about serious topics such as these, she is managing events for Students of Lawrence (SOL) Studios and learning modern dances with her friends. On dancing, she said, “We do unprofessional choreographed dances that are different from cheerleading and swing dance. It is a very urban style. We learn it on our own and then put it together in front of big mirrors.” Some of the music they dance to is K-pop, electronic and hip hop. In line with Yang’s interest in urban electronic music she also helps plan events for SOL Studios even though she is a non-music major. “I really like what the studio is doing,” she commented, “and wanted to be part of it, enjoying making music even though I don’t know a lot about music. I hope people know that [you can have] a non-classical viewpoint of loving electronic music and production.”

“My religion has a really huge impact on my life because I learned it when I was a kid,” Yang said. She belongs to Baha’i Faith, which was established during the 19th century in the Middle East. “I read the teachings of Baháʼu’lláh, and I’ve been on pilgrimage in Turkey before. If you notice on the [Hurvis Crossing], there is an inscription that reads, ‘So powerful is the light of unity that it can illuminate the whole earth (Epistle to the Son of the Wolf, p. 14).’ This comes from my religion, and it is amazing that it is here.” Yang described the beliefs of Baha’i Faith in her own words: “We believe in education, that everyone should have access to education. We believe that religion and science can live together, that they should be processed together. They are not opposites but should be together. We believe in equality. Men, women, different genders: everyone should be treated equally, and among other things, like race. I think it is an important part of my life.”

Next, Yang talked about her community belongingness on campus. “It’s nice to [have] a spiritual center like Sabin House. You can go in and pray in it. It is a good environment to meet people who are atheists or Jewish. They come together to talk about their views and to see [how others] do different things,” she commented. “I have participated in Jewish events before. I got to see the wine and the bread [being shared]. I think it’s very cute and touching to see.” Yang then described other parts of her experience with campus inclusivity. “The school is supportive of the fasting we do. Although the Commons is not always satisfying, the school’s meal plan supports you when you’re fasting. It’s a big deal. My high school back in China did not do this. It did not acknowledge a lot of religions.” She concluded, “People are really understanding and embracing. Endorphins!” She pointed to her head where happy chemicals are released as a response to good things — like puppies and chocolate.

After this term is finished, Yang plans to go back home where her family lives and finally get to hug her dogs who have waited a long time to see her. She is one of many Lawrentians who are taking their education with them as they live in the communities that they call home during the COVID-19 pandemic.