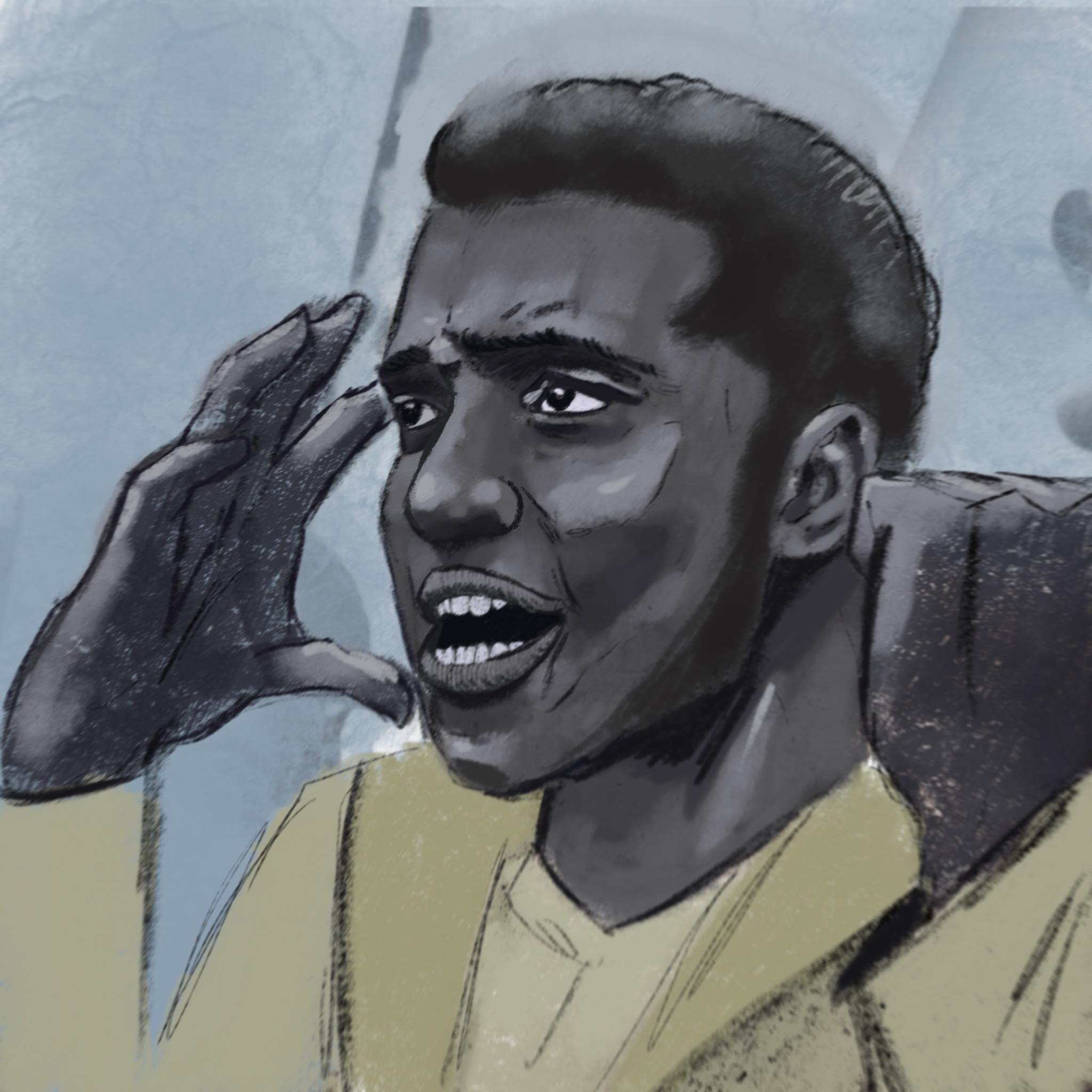 Frederick Allen Hampton, or as history knows him, Fred Hampton is a name many of my white friends have never heard. When I learned this, it became absolutely necessary that I make my next story about him to share the impact he has had on civil and class issues in the U.S. It could not have been more perfect timing. This is his story. Hampton was born Aug. 30, 1948 in what is now Maywood, Illinois (Mack, 2015). He was especially good in school and in sports, hoping to one day play for the New York Yankees. He graduated from Proviso East High School with honors, varsity letters, and Junior Achievement Award in 1966. After, he enrolled at Triton Junior College in River Grove, Ill. where he majored in pre-law (Gottlieb & Cohen, 1976). Hampton then became involved with his community, showing strong leadership skills in his activity with the National Association for the Advancement of Colored People (NAACP). Through this organization, Hampton aimed to improve educational facilities in the impoverished Black communities that permeate the Chicagoland area. He aimed for social change through community organization and nonviolent activism (National Archives).

In Nov. 1968, Hampton joined the Black Panther Party (BPP) Illinois chapter as he was attracted by the 10-Point Program it used for Black empowerment and equal rights. Most notably, Hampton’s activism within the Party resulted in a nonaggression pact among Chicago’s powerful gangs at the time (southsideweekly.com, 2016). The alliance among these multi-racial groups became the Rainbow Coalition. Once the groups organized, they could then peacefully picket, fighting against poverty, corruption, police brutality and substandard housing. They held protests, strikes and demonstrations when the groups had common cause (Serrato, 2019). The groups would also go out to support another’s event when they could (Mccanne).

During this time, Hampton took on more and more leadership within the BPP. He was popular and very active, making him a good fit to lead the Chicago chapter. He led weekly rallies, strikes and worked with the BPP’s free medical People’s Clinic by teaching classes about political education. Hampton was also an important figure in the formation of the BPP’s Free Breakfast for School Children Program in Oakland, Calif. during Jan. of 1969 (Bush, 2000). Although there were previous efforts made by the federal government to create such a program before the Black Panther Party’s initiative, such programs were not successful until post BPP efforts. The Program was run simply by Party members and volunteers who collected food donations at grocery stores after consulting with nutritionists to develop healthy breakfasts for children free of cost. The results were astounding to school boards and was eagerly implemented in schools nationwide with the Party’s help. Children could focus, participate, stay awake at their desks and no longer cried from hunger throughout the day (Blakemore). At this point, Hampton became the chairman of the Illinois chapter of the Black Panther Party (Bush, 2000).

Despite the wild success and progress made in America’s public schools, the FBI chief J. Edgar Hoover considered Hampton a major threat. At this time, the FBI was actively trying to prevent Black movements from gaining traction in the U.S. because they believed it was a steppingstone to a revolution that could threaten for the United States’ government. This proved problematic for Hampton’s chapter and the groups involved with Chicago-based coalitions (Therlee, 2018).  The FBI opened a file on Hampton in 1967 and in 1968 he was placed on the FBI’s “Alligator index” as a “key militant leader” (Wall, 1988). In 1968, the FBI sent informant William O’Neal, twice arrested for car theft, and offered pardon of his felony should he agree, to infiltrate the Chicago Black Panther Party as counterintelligence (Hampton et al, 1979). O’Neal quickly rose in the organization and became Hampton’s bodyguard. In short, the FBI caused rifts between the BPP and Students for a Democratic Society, provoked several murders, distributed misinformation about the Rainbow coalition and circulated racist cartoons in Panthers’ names. Hoover demanded that the COINTELPRO end the BPP’s “serve the people” motives as a goal in their Rainbow Coalition investigations (Churchill, 2017). The FBI actively encouraged violence and infighting between the Panthers, other radical groups and the Chicago Police Department (Newton, 2017).

On Dec. 4, 1969, Fred Hampton was assassinated in his bed as a result of COINTELPRO activity to prevent further Party development and leadership. Hampton was appointed to become the Party’s Central Committee’s Chief of Staff and would have if he were not killed that night (Democracy Now!, February 1, 2021). The previous night, Dec. 3, Hampton had a typical night of responsibilities. He was not known to do drugs, but later investigations have found traces of barbiturates in Hampton’s blood, which leads to suspicions that he had been drugged that night (Haas, 2010). The drug was later identified as sleep agent secobarbital (Churchill, Wall, 2002). His home was raided by a 14-man team of the SAO (Special Prosecutions Unit) with a search warrant for illegal weapons (Wall, 1988). The raid was organized by Cook County State’s Attorney Edward Hanrahan after he was recently criticized by Hampton, saying that his “war on gangs” was really a “war on Black youth” (Berger, 2009). At 4 a.m., heavily armed police stormed the apartment and instantly killed Mark Clark who was on security duty at 4:45 a.m. Afterwards, they entered Hampton and his fiancée’s bedroom, forcing the pregnant woman out and aimed for Hampton’s head. He was wounded in the shoulder. He was dragged to the door to lay in a pool of his blood (“Hampton v. City of Chicago, et al.,” 1978). Hampton was only 21 years old when he was killed by a COINTELPRO team. He now rests at Bethel Cemetery in Haynesville, La.

Decades later and less than a month ago, hundreds of pages of documents were recovered by Chicago-based historian, Aaron Leonard ‘s continuous investigation of the case in January of this year. The journalist found striking evidence that FBI director, J. Edgar Hoover, was intimately involved in the assassination of Fred Hampton (Democracy Now!, 2021), according to newly recovered evidence about the FBI’s involvement in Hampton’s death. Over 200 volumes of information were confirmed to be suppressed by the FBI (Taylor & Haas, 2021). These documents are available for public viewing on the FBI’s website under Freedom of Information laws (UNESCO). Ironically enough, the recent release of a Fred Hampton biopic film, “Judas and the Black Messiah,” coincided with the revelation of the important evidence against Hoover. The movie’s premiere was Feb. 1, 2021, at the 2021 Sundance Film Festival, and critics have been raving ever since. The film has even won the American Film Institute Award (AFI Awards 2021) and the National Board of Review Award (Deadline Hollywood, 2021) in the short period since its release. It is also nominated for seven other awards, including Daniel Kaluuya’s nomination for a Golden Globe Best Supporting Actor Award in his role of Fred Hampton himself (Golden Globes, 2021).

Fred Hampton has touched countless lives and changed our country for the better. After 51 years since his passing, the young man is still relevant to Black America and all civil justice work. You were taken from us too soon, Fred. But perhaps it’s true that only the good die young.