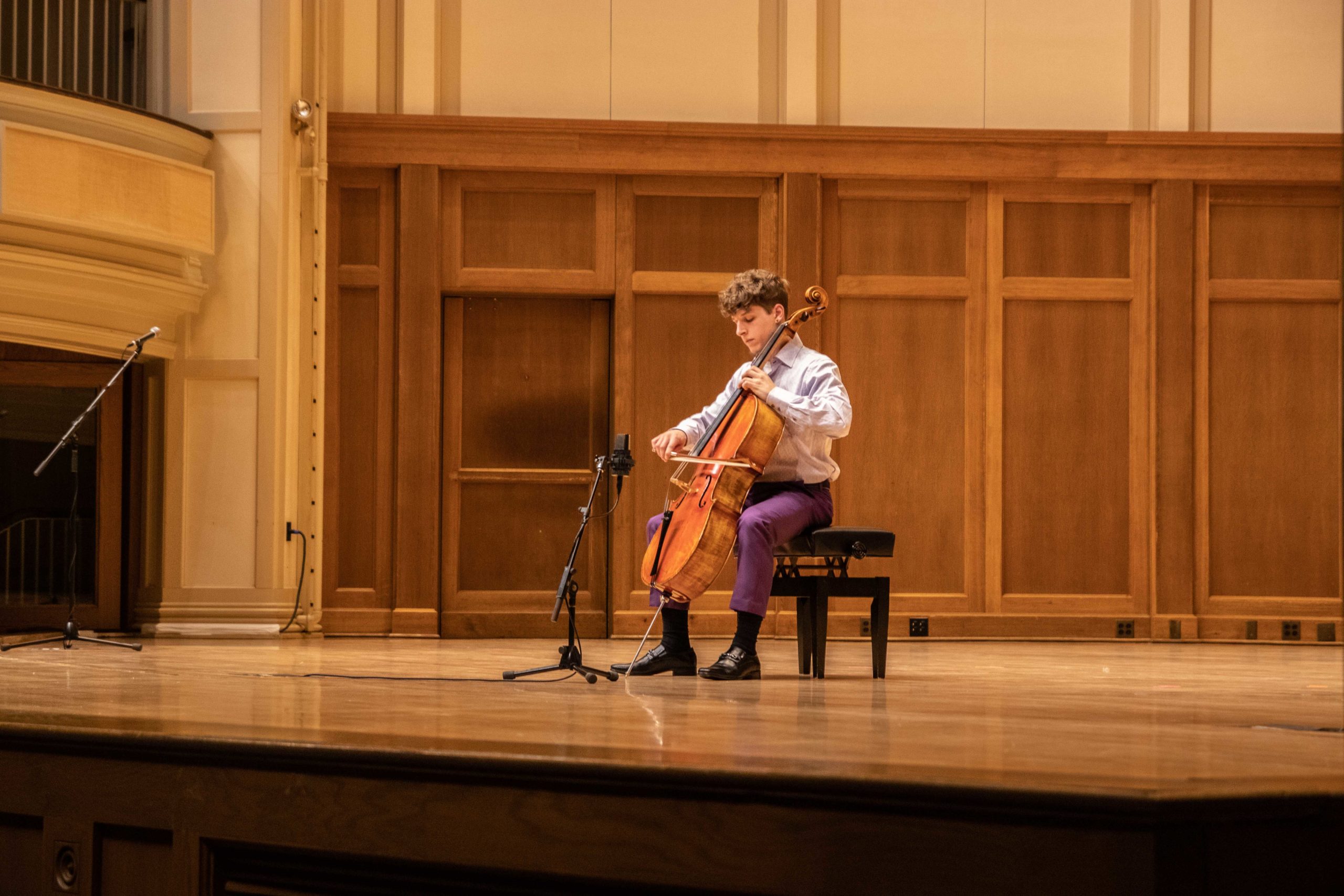 Lewis played two pieces: Robert Schumann’s “Adagio and Allegro,” accompanied by senior Hung Nguyen on the piano, and Benjamin Britten’s “First Suite for Solo Cello.” The Schumann piece started the recital with a bang, bouncing between higher and lower pitches and creating some beautiful melodies with Nguyen’s piano. This first piece, however, was reserved compared to what followed. Britten’s cello suite is an epic adventure, marked by distinct, unique sections of heavy chords, erratic plucked sections and dissonant harmonics. These two pieces, along with Lewis’s commanding presence on stage, made for an impressive and impactful outing.

“The Britten is really the piece that I fell in love with,” said Lewis. “It’s really a masterwork.” The piece, which he memorized in its entirety, has a wide host of influences, from other composers like Bach, to military marches, to Balinese gamelan music and even the Japanese tradition of Noh theater. Lewis explained how he was first drawn to the 25-minute piece when he saw another Lawrence cellist perform it over a year ago and began practicing the piece in the spring of 2020.

Lewis also discussed the difficulty of transitioning to a mostly online recital. “It’s hard,” he said. “I got really lucky this term that they started allowing [a small number of] people in the chapel.” Lewis said he made a very intentional choice to schedule his recital late in the year in the hopes of reserving the chapel and allowing his friends and family to see the recital in person. A major struggle for Lewis, he also noted, was the shift to playing in front of a camera. “A year ago, playing in front of a camera really stressed me out. It’s saved forever . . . it can easily feel like an opportunity that’s missed.” He said, though, the pandemic has largely changed his perspective: “Through necessity I’ve grown past that.” Lewis said the need to record for class or lessons has greatly improved his playing due to the way that he’s been forced to listen back to recordings and critique his own performance and see the audience’s perspective. “In the end, it’s really about [the audience] . . . the better I can see my playing from the audience’s perspective, the more effective of a performer I can be.”

The time, effort and thought Lewis put into the performance was clear in his playing and presence on stage. With a strong introduction in the Robert Schumann composition, followed by a powerful and emotionally resonant voyage through different musical influences in the separate movements of Benjamin Britten’s “First Suite for Solo Cello,” the performance as a whole reflected Lewis’s dedication to his craft.

Those who missed the recital and intended to watch it are still in luck, as the entire livestream will be saved on Lawrence University’s Vimeo page for the following several weeks.