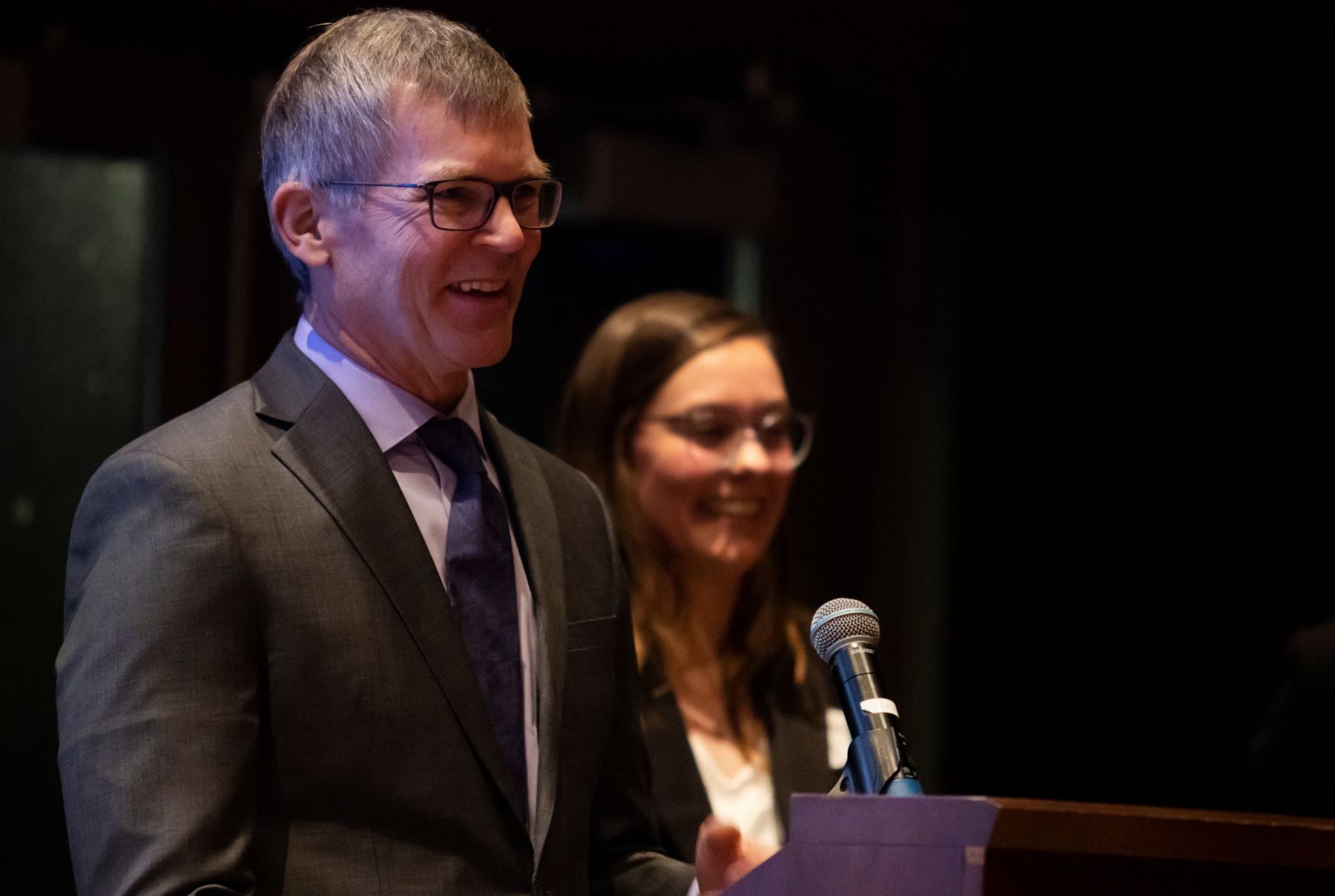 Paulson speaks at a Be the Light! event held during Winter Term 2020. Photo by Danny Damiani/Office of Communications

Tom Paulson ’93 was born on April 29, 1961 and died unexpectedly in his sleep on April 21, 2021. Tom grew up in Kaukauna, Wisc. — roughly 10 minutes down the street from Lawrence. He graduated from Kaukauna High School, where he met his best friend and future wife, Mary. They went on to have three children: Sarah, Nick ‘14 and Erik ‘16.

When the young couple settled down to start their family, Tom began to think more seriously about his plans for the future. Then, when his job at the Institute of Paper Chemistry (IPC) in Appleton offered him the opportunity to attend Lawrence through a tuition remission program, Tom seized the opportunity. Beginning in the mid- ‘80s, Tom took one course per term for six years.

When IPC relocated, Tom was left with senior status but no tuition remission program. If he continued on the part-time schooling path that he was on, he would have nearly four more years of school ahead of him. This path was simply not feasible for the young Paulson family. Tom’s professors at the time worked with him and financial aid to create a one-year path to graduation.

Tom Paulson graduated from Lawrence with a degree in chemistry as a non-traditional student at the age of 32 — all while working full-time and being a father to young children.

Tom’s degree set him on a career path that would include two successful business start-ups. His success was not just due to his diploma but also to the drive fostered during his time at Lawrence.

In his obituary, Tom’s work ethic was referred to as part of his legacy. Tom’s legacy, his unquestionable love for learning and family, continues to burn within many in the Lawrence community and beyond. Four current students, myself included, and one alumna are fortunate enough to be a part of that bright legacy because of the Paulson Family Scholarship.

While their sons were both studying at Lawrence, the Paulsons began to talk about making a financial commitment to the school that had impacted their lives so much. Beginning in 2016, they settled on the idea of an ongoing scholarship. For the past five years, the Paulsons have provided the full demonstrated financial need for a Kaukauna High School graduate attending Lawrence. Last year marked the first time in which a Paulson scholar could be found in each class. Now, there are five: Bailey Underwood ’20, senior Isaac Wippich, junior Molly Ruffing, sophomore Enna Krnecin and first-year Madison Clark.

Aside from their generous financial support, the Paulson family also shows that they genuinely care about each of us scholars. Family dinner has become a tradition for the beginning of each school year — a time to share cheese curds and for everyone to get to know each other better by discussing more than just classroom lessons.

Before the first family dinner, I was petrified by the thought of breaking bread with the Paulson family. After all, what if they got to know me? Little did I know that my fears would be completely fulfilled, for the Paulsons fully intended to know each of us, even little ol’ me.

Later that year, I found myself looking at different college websites and considering which one I would run to. But then I took a little chance and sent Tom and Mary an email, letting them know how I felt. And they saw me. They saw my fear, and they also saw the potential that I was so blind to. Because of the Paulsons, I re-examined my role on this campus and chose to stay.

When I initially heard of Tom Paulson, I was still vehemently opposed to attending a college 10 minutes away from my hometown. When I first met him, I had only just begun to reckon with the fact that I did want to go to Lawrence. Then, as I was enveloped into his family, I understood why I chose Lawrence.

Mary, Sarah, Nick and Erik, I am so sorry for your loss. Tom’s legacy is the many people he loved, the bluegrass music he made and the light that radiates within every community he touched. May it shine on.